R.A. Dickey: how long can he keep it up?

Share All sharing options for: R.A. Dickey: how long can he keep it up?

Is there a major leaguer today more unique than R.A. Dickey? This past year alone, Dickey has climbed Mount Kilimanjaro, wrote a New York Times bestselling book, won 20 games and a freaking NL Cy Young Award. Most people would be satisfied accomplishing just one of these tasks their entire lifetime.

Dickey has had a career full of uniqueness and anomalies. After being drafted in the first round of the 1996 Rule IV (amateur) Draft, the Rangers discovered that he had no ulnar collateral ligament (UCL) and proceeded to reduce his signing bonus from $810,000 to just $75,000. After a few too many years of not being able to distinguish himself from other fringe MLB pitchers, Dickey decided to give the knuckleball a shot. Spending almost the entire 2006 and 2007 seasons in the minors, Dickey ended up throwing 112.1 innings for the paper thin Mariners 2008 pitching staff, though more than half his appearances came in relief. The following season, as a Twin, Dickey was used as the long man out of that bullpen and threw another 64.1 MLB innings. Following that season, Omar Minaya signed R.A. to a minor league deal, three years and a Cy Young Award later, here we are.

Since signing with the Mets, Dickey has gone on to be one of the best all around starters in baseball culminating in a completely dominant 2012. He's mastered and revolutionized the knuckleball, throwing a few different variations of it. While majority of his knuckleballs fall between 70-79 MPH, Dickey has a fast knuckleball that he can get up to 83 MPH and an eephus knuckler which sits in the low 60s.

In addition to changing speeds with the pitch, Dickey can also keep the pitch true as opposed to its natural floating and dancing.

Somehow Dickey is able to accomplish with his one pitch what most pitchers fail to do with several. So after a dominating 2012 what can we genuinely expect from Dickey moving forward. Is he progressing, has he plateaued, when will he start declining. What makes Dickey such an interesting, yet confounding, case is that he's 38 years old, but on the other hand seems to be progressing.

Unlike most 38 year olds, Dickey has been improving from season to season leading up to this past season. He's been throwing the knuckleball and he's finally reached the pinnacle of pitching, entering previously uncharted territory for knuckleballers. While Dickey's walk rate has been pretty stable over the past three seasons, his strikeout rate spiked this past year. Having a K% of 14.6% and 15.3% respectively in 2010 and 2011, this past year Dickey raised that to 24.8%. So was this past season an outlier or progress? To answer that question properly we have to look at the information that is available to us.

What we do know about Dickey is that he's a knuckleballer and those guys, especially if they're decent, tend to pitch into their forties. On the other hand, Dickey had been a conventional pitcher until 2006 and is missing his UCL and no one truly knows what kind of ramifications that could have. Another cause for concern is that fact that Dickey throws harder than any other knuckleball pitcher in history so he might wear out quicker.

The truth is that Dickey's fastball velocity has been declining, though I'm not sure how important that is being that it contrasts the knuckleball in that it spins and not just that its velocity is higher. I thought it would be interesting to forget about age for a second and compare Dickey's first few seasons as a knuckleball pitcher to a few of the other knuckleball greats. The knuckleball pitchers I thought to be most comparable to Dickey are Phil and Joe Niekro, Charlie Hough, Wilber Wood and Tim Wakefield. 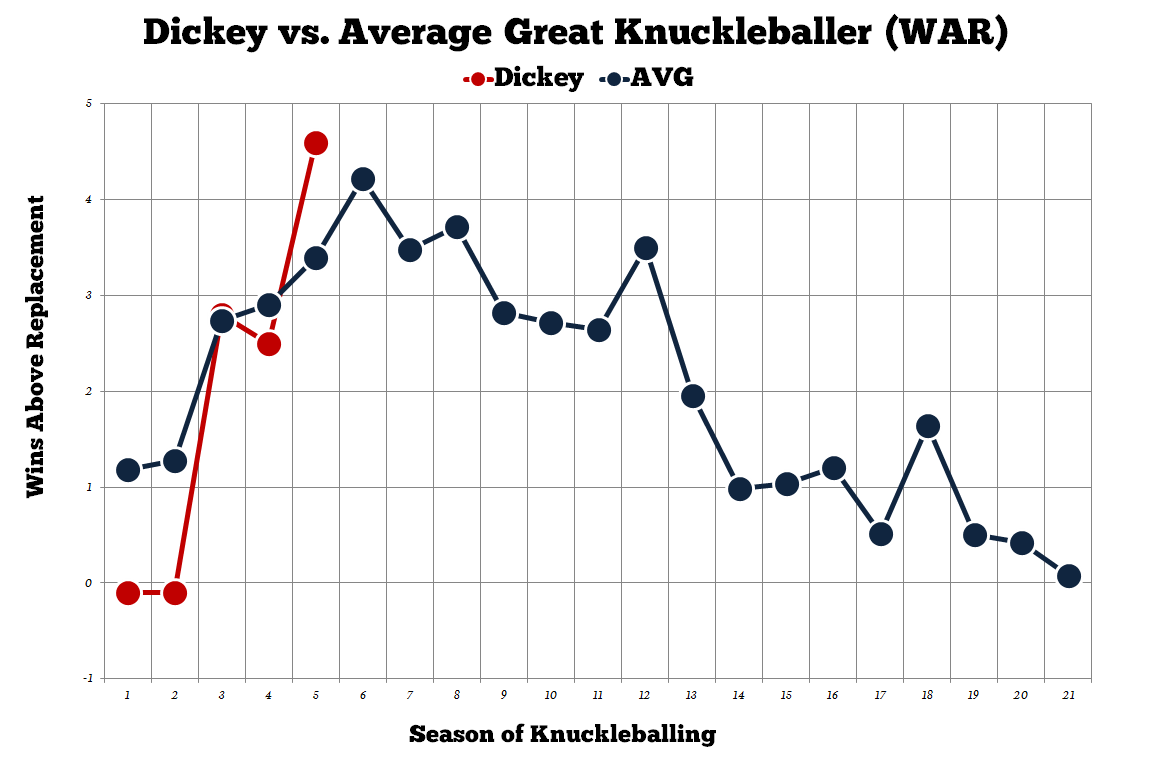 What we have here is the average WAR produced per season from the first time each of these pitchers went over 100 innings pitched with the knuckleball and until the end of their career. Dickey actually has a pretty similar career arc to that of hid knuckleballing brethren. And just going by the average successful knuckleballer, Dickey should probably have another few three WAR seasons in him. What should also be noted is the jump in success most knuckleball pitchers experience from their fourth to fifth season. The spike and drop off witnessed around the 13th and 14th season are just an effect of Phil Niekro's ridiculous 9.4 WAR season produced in his 13th season and then a drop of 5.4 WAR the next. Back to our main topic, what really differentiates Dickey from his knuckleball collegues is his ability to generate swings and misses. 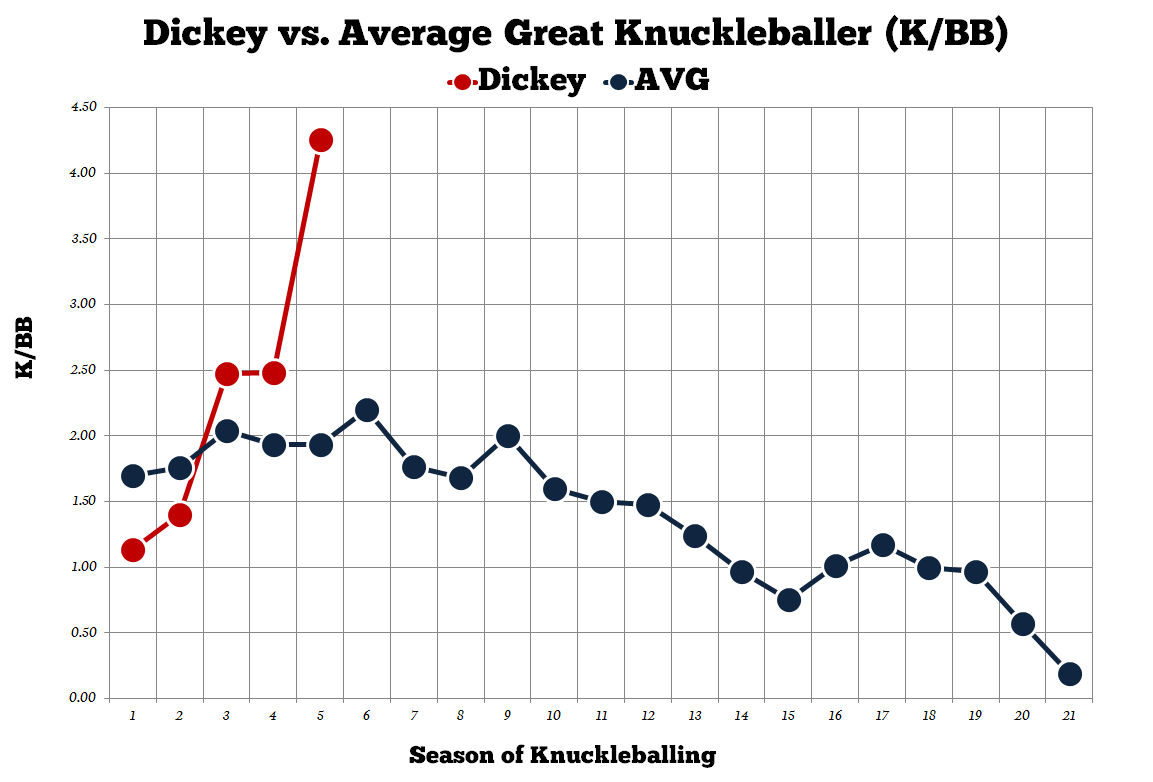 Because of this little piece of information, I thought it to be apropos to compare Dickey to the young, but talented starters who have recently broken out, being that Dickey himself looks to be in the midst of an ascension. I therefore compared Dickey to this season's AL Cy Young Award recipient, David Price and NL Cy Young Award runner-up, Clayton Kershaw. 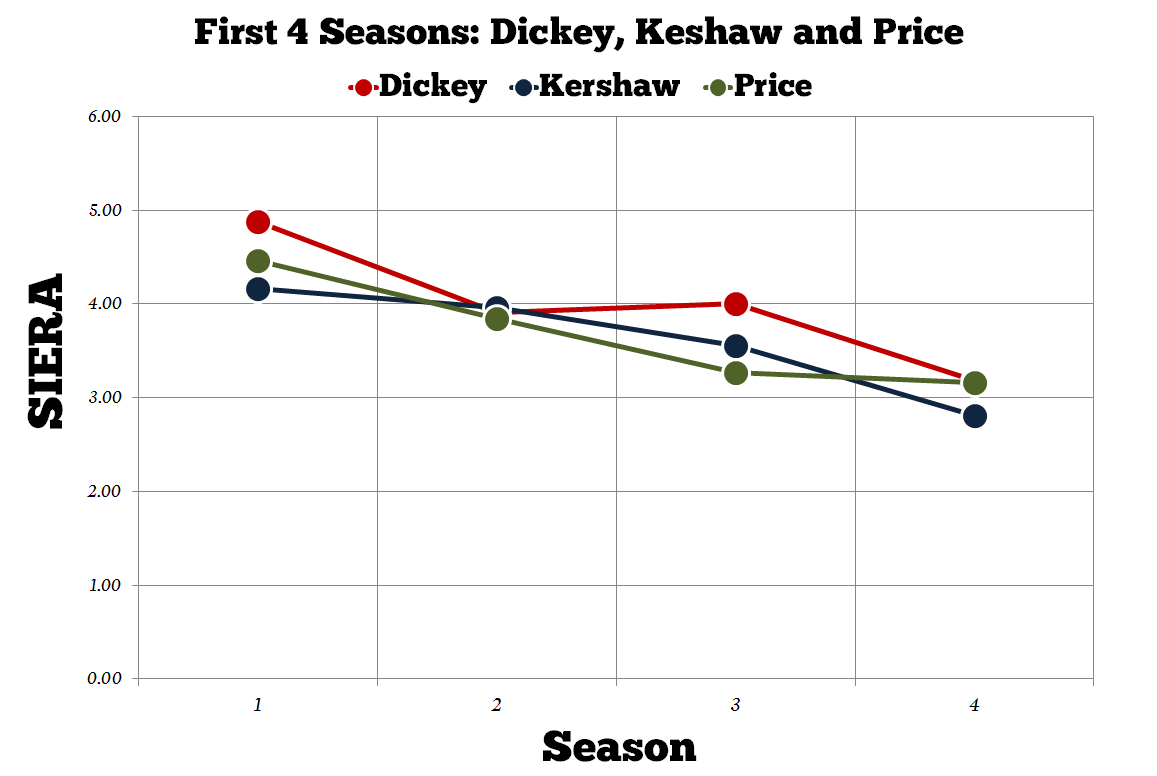 Interestingly enough, SIERA wise, Dickey has followed a similar career trajectory to those of the young and budding pitching stars of the MLB. While Dickey might be older, its as if he's conventionalized the knuckleball and it might be more appropriate for him to be compared to other conventional pitchers who entered the league the same time Dickey became a knuckleballer. Instead of looking at pure age, what should instead be focused on is that pitcher's history pertaining to that specific skill. For example, if a player converted to pitching at a later stage in his career, he'd probably follow a different career trajectory than most pitchers his age. Considering that Dickey is definitely more comparable to younger pitchers than to other over 35 year old starters.

Dickey's renaissance as a knuckleballer and his ascension to the top of baseball, has everyone wondering what will be of Dickey over the next few seasons. Though his career path since becoming a knuckleballer is following the likes of Clayton Kershaw and David Price it would be ludicrous to believe Dickey can maintain his current level of performance over the next five seasons. On the other hand, it would be foolish not to acknowledge the fact that Dickey was one of the best pitchers in 2012. In order to properly project what Dickey'll be in 2013, we have to realize that he was probably lucky to some extent this past season and will regress toward the mean, even if only slightly.

What I'd suggest for a projection is something of the following, producing 7-10 WAR the next two seasons, with another 8-10 WAR for the four seasons following. Though honestly, with Dickey all bets are off. It wouldn't even surprise me If he won the Cy Young award again next season or pitched until the age of 60. Because at the end of the day Dickey has taken the knuckleball to places its never gone before and enjoyed one of the most productive seasons a knuckleballer has ever had and did I mention he pitched this entire past season injured?

GIFs and data from FanGraphs