Is Dan Haren still the ace that everyone thinks he is?

Dan Haren has been one of the most underrated pitchers in baseball. His season didn't go as planned n 2012, mainly due to injury. Is this the perfect chance for someone to swipe him up?

Share All sharing options for: Is Dan Haren still the ace that everyone thinks he is?

Yesterday, the Los Angeles Angels dealt starting pitcher, Ervin Santana, to the Kansas City Royals. Now the Angels are focused on dealing Dan Haren. The past few seasons Haren has suffered from back issues, and this season he suffered his worst year as a starter. Going into next season is it something that could be fixed, or is Haren's days as a quality starter over?

Since he he began pitching for the Oakland Athletics in 2005, Dan Haren has been of the more underrated pitchers in the game. He doesn't strike a lot of batters out, and can barely hit 90 MPH. That doesn't mean he isn't a good pitcher though.

2008 was a breakout year for Haren, during which he posted 6.5 WAR and established himself as one of the best pitchers in baseball. In fact, since that time he's arguably been a top 10 pitcher in baseball:

Since 2008 he's ranked eighth in overall fWAR, with a total of 24.7. It's even more impressive since he had a down year, and only managed 1.8 WAR in 2012. Like I previously mentioned, Haren isn't a big strikeout pitcher, and in this group he ranks towards the bottom half. On the other hand he has excellent control, and his 4.5 BB% ranks third overall.

The question though is how could Haren go from one of the best starting pitchers in baseball, to one of the worst?

Haren saw some numbers go in the wrong direction in 2012. His strikeout percentage dropped by one percent, but was still average to above average. His walk percentage saw an increase, but it was still excellent. Two concerning numbers were the uptick in his HR/FB%, as well as his decrease in groundballs. 2011 was arguably Haren's best season, and during that season his HR/FB% was 7.5%. According to FanGraphs, that's considered a great number.

Looking at this year we can see Haren saw his HR/FB% skyrocket to 12.8%. FanGraphs tells us that's an awful number, and it certainly didn't help Haren's success. In 2009, Haren also saw a high HR/FB% number, but he was striking out batters over 24% of the time.

Haren also gave up fewer groundballs this year, which in turn became flyballs. That certainly didn't help his success either. 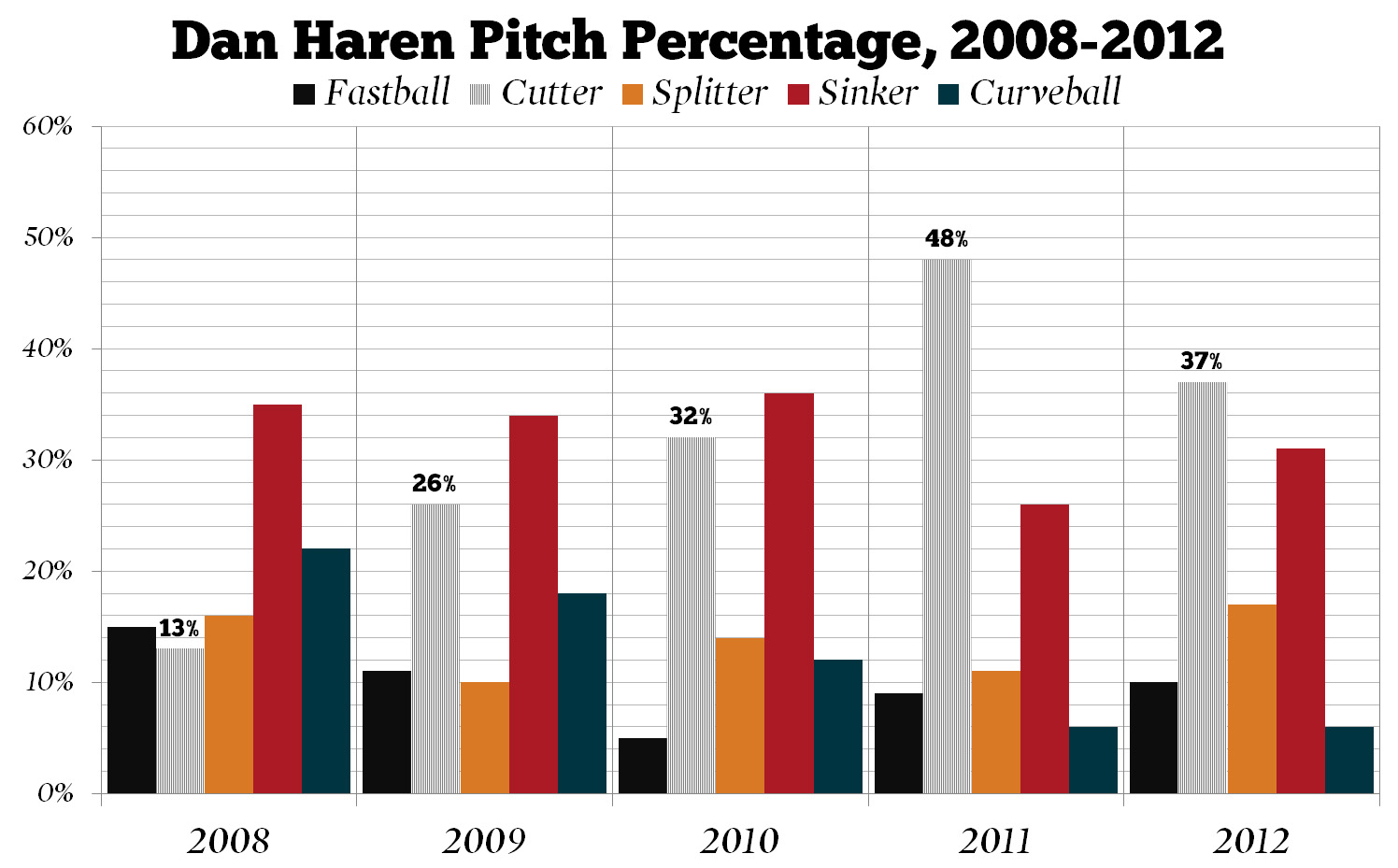 Haren did see some interesting changes with his pitch usages this past year. Like I've said, 2011 was arguably his best season as a starter, and during that season he exclusively featured his cutter. This season he used his sinker more than last year, but didn't get the results. It's interesting though, because from 2008-2010 he used his sinker a lot more, and was still successful. Haren did suffer from back issues this year though, so that could be a big factor as to why he struggled. 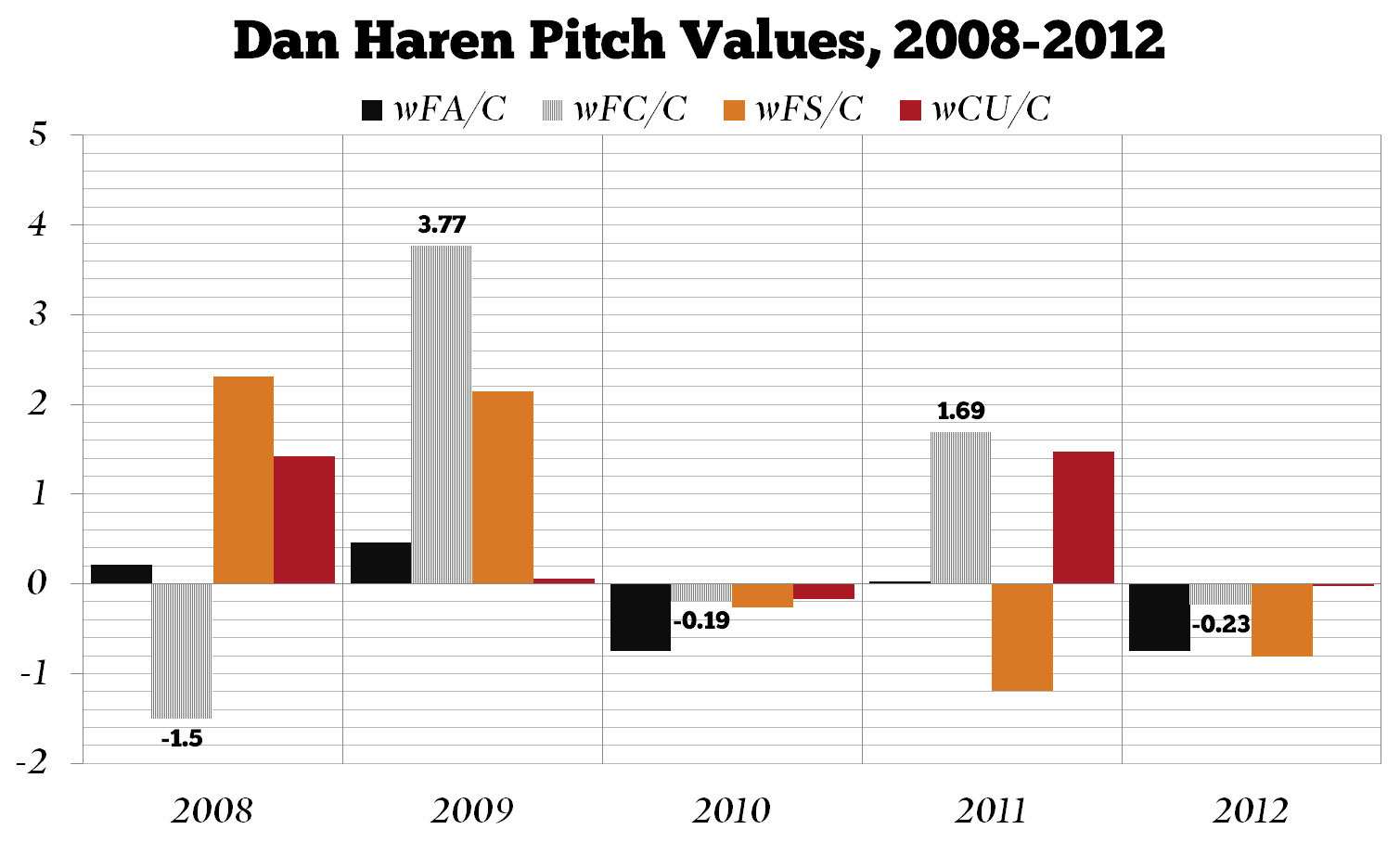 One thing that immediately stuck out when I saw this chart is that none of his Haren's pitches yielded positive results in 2010. His fastball was his weakest pitch, costing -.75 runs for every 100 fastballs thrown. Since league average tends to be round +1.5 to -1.5 runs per 100 pitches, we can't say Haren's results were terrible that year.

2011 was an all new ballgame though. He saw great results with his cutter, as well as his curveball. He saved over 1 run per 100 pitches with each pitch, but saw poorer results with his splitter. In 2012 he didn't see one pitch return positive results, but unlike 2010 he was not good.

It's tough to say what his best pitch is though, because in 2008 his cutter wasn't very good, but the next year it was unusually great. It's possible this type of stuff varies year to year, maybe that's something that I can look at down the line. 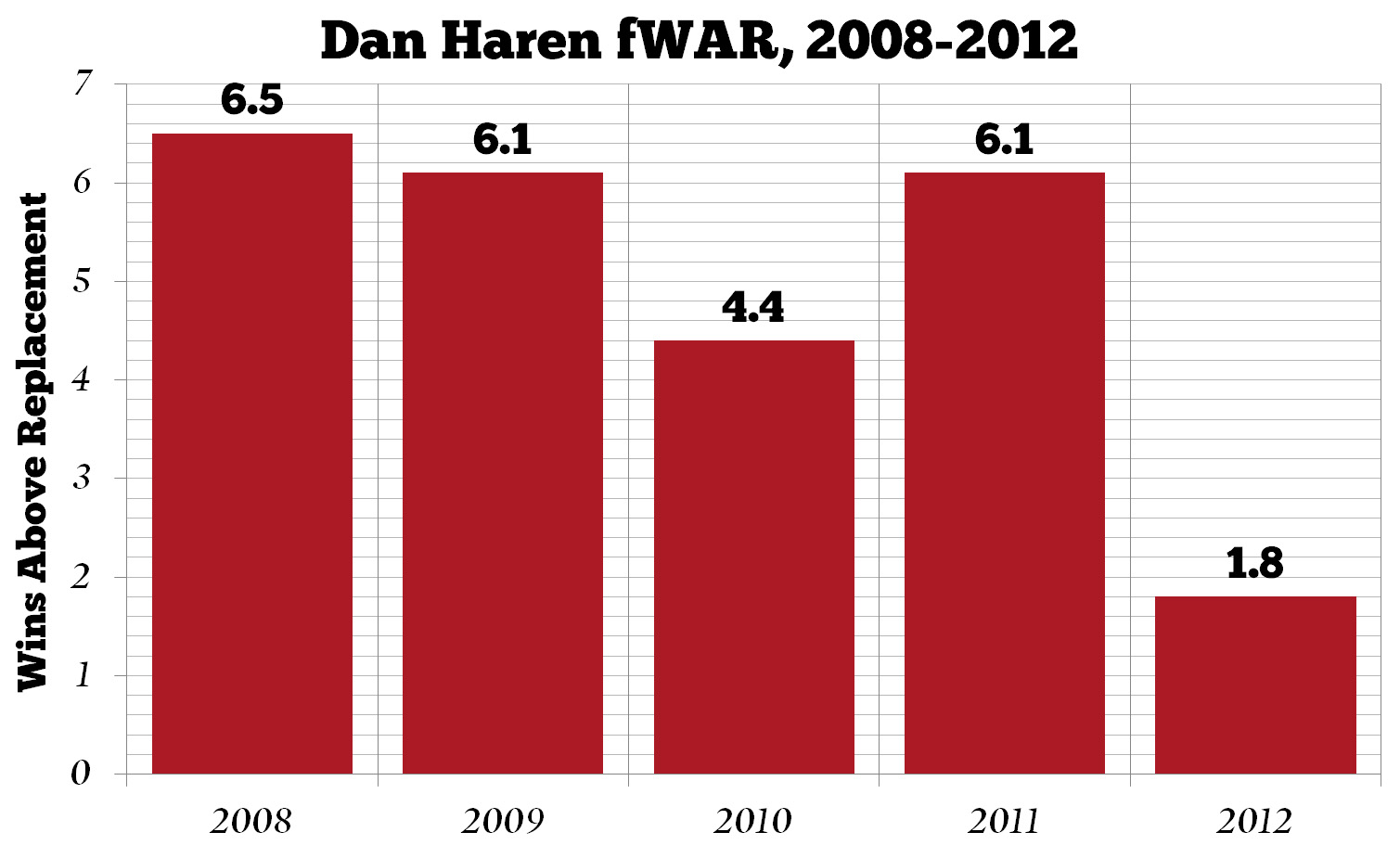 Since 2008 Dan Haren has averaged 4.98 fWAR per season. This season he had a down year, and more than anything I think his injury was the main culprit. There many teams that could use a guy like him, and a few teams that I could see taking a run at him are the Boston Red Sox and the Minnesota Twins.

I think the Twins could be a sleeper team, because they desperately need pitching. This may not seem like a move they'd make, but they have some nice pieces in their farm system, and the Angels just might find someone that they like.