Breaking down the Royals' offseason so far

Looking at the Royals moves to try and solidify their rotation, including the recent waiver claim of Chris Volstad and the trade for Ervin Santana.

Share All sharing options for: Breaking down the Royals' offseason so far

This looks to be the year that Dayton Moore finally puts the finishing touches on "The Process," taking the next step and going for the playoffs.

Kansas City has recently acquired starting pitchers Chris Volstad and Ervin Santana, via waiver claim and trade respectively. The Volstad waiver claim was met with universal confusion, as many considered him to be an obvious non-tender candidate. I don't mind it, as it appears that the Royals have opened up the checkbook, so the $3 million (roughly) that he'll make next year should not be too big a problem.

Ervin Santana is a bit of a different case, as the $12 million he is owed for next season is a sizable amount for any team. He had a horrible year at the surface, posting an ERA of 5.16 and allowing 39 HRs in 178 innings. Santana should be due for some favorable regression as his 18.9% HR/FB rate should be lowered significantly. 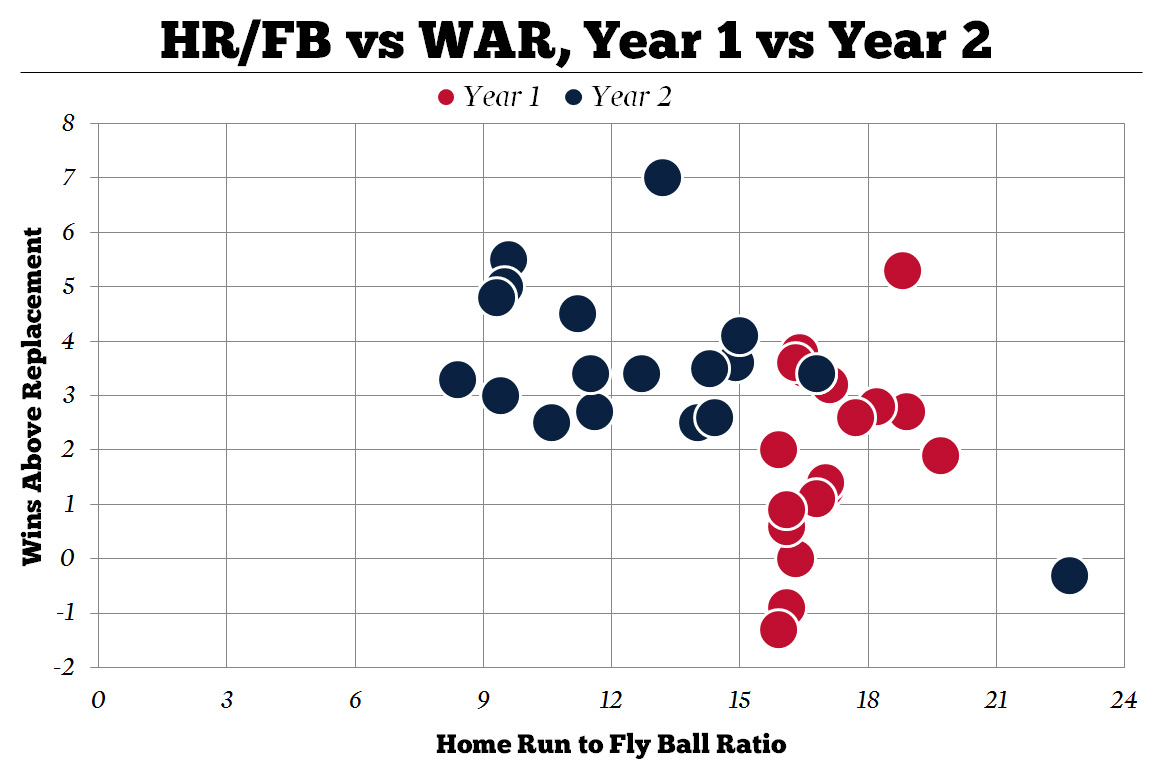 As you can see above, of the top 20 outlying seasons in HR/FB rate (not including 2012) since the stat has been kept, a decent amount of those pitchers rebounded the next season, and some of those pitchers saw a jump in their WARs as a result. Ervin Santana is as good a bet as any to come back from his dismal 2012 season, with 2012 AJ Burnett not being a bad comparison to look at for him.

As the chart above shows, Volstad's slider has been moving less and less since he first came into the league, and this may have led to a very high contact rate on the pitch of 74.2%, as opposed to a career number of 71.7%. This coupled with opponents chasing it less, swinging at just 33.7% of sliders he threw out of the zone (36% career). The thing that gives me pause on blaming the low k-rates on the slider, is that he was able to induce a 13% SwStr% on the pitch, meaning that he got a good amount of whiffs.

Next, looking at Volstad's change-up, we can see if we have a problem. The pitch cost Volstad -7.16 runs last year, and he allowed 10 home runs off the pitch. Furthermore, he posted an alarming 2.8% SwStr% on the pitch, with opponents hitting it for line drives 21.9% of the time. Opposing batters made contact with the pitch 93.4% of the time.

It looks like Kansas City made out very well in these deals, giving up nothing but a replacement level at best reliever, and acquiring two guys, one should be an automatic upgrade, and the other a viable five starter. They added two quality arms to their rotation in 2013, helping to move the team towards respectability. While it is easy to take shots at Dayton Moore, it is also important to give credit where credit is due. It will be interesting to watch how Kansas City continues to try and build towards a playoff birth.