Wade Miley: From out of nowhere to front of the line starter

After four seasons in the minor leagues, and seven appearances in 2011, Arizona Diamondbacks starting pitcher, Wade Miley, developed into a front of the line pitcher. How was he so successful though?

Share All sharing options for: Wade Miley: From out of nowhere to front of the line starter

After being taken in the first round of the 2008 draft by the Arizona Diamondbacks, Wade Miley, worked his way up through their minor league system, before debuting in 2011.

He doesn't throw extremely hard, his fastball tops out around 91-92 so he needs to rely on good command, and limiting the amount of home-runs that he gives up.

Despite the small sample, the results weren't very promising, and Miley was already 25 years old. Still young, he needed to improve in 2012.

Heading into the 2012 season Wade Miley didn't even appear on the Diamondbacks top 15 prospect list, yet his performance took a complete 180.

He didn't resemble the pitcher from a year ago at all.

His strikeout percentage rose by 4%, and the walk percentage dropped nearly 6%. As a result he saw his FIP improve by nearly two runs. At the end of the 2012 season his FIP (3.15), ranked ninth in all of baseball.

In terms of overall fWAR, Wade Miley ranked tenth for all qualified starting pitchers, despite a ground ball percentage that was a little low.

However, when his groundball percentage on a pitch type basis is considered we see a different outcome.

For the most part his change-up is what brought his overall groundball percentage down. His slider received the best results, as it generated groundballs 55% of the time.

Of the top-nine starters in baseball, his HR/FB% was the second best in the group, despite playing in Arizona.

Also he showed some of the best command in the group, walking just 1.71 batters per nine innings.

How did Miley turn into such a good pitcher though? Let's take a look.

Miley's O-Swing% saw a 7% increase from a year ago, but saw his O-Contact% drop by 2%. So batters were swinging at balls outside the strikezone more, but weren't making as much contact. Batters also swung at an almost three percent higher clip.. 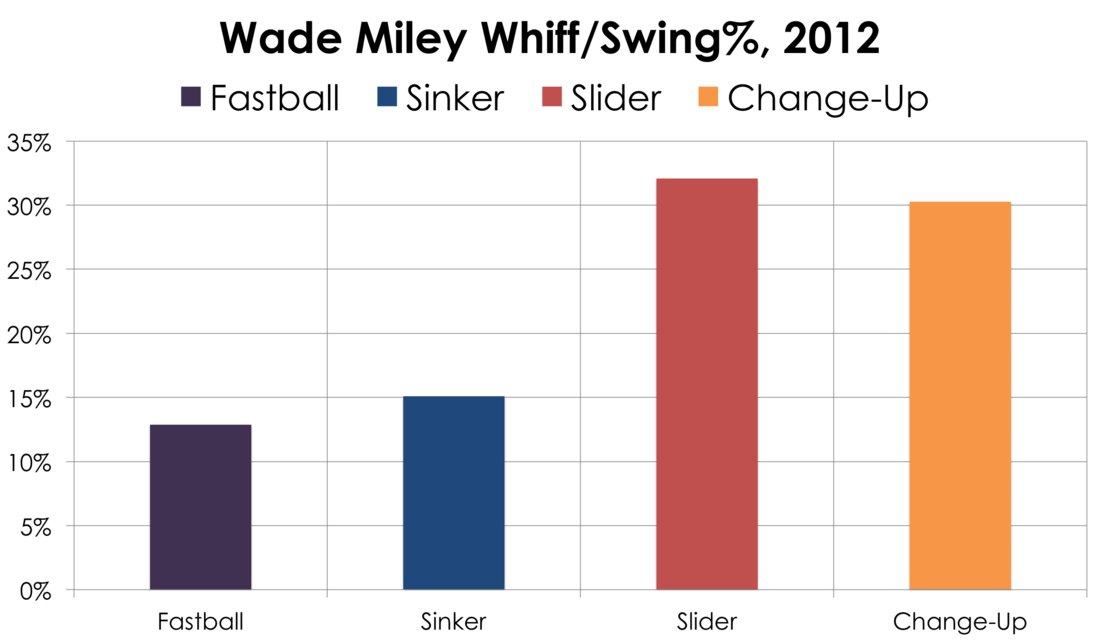 In terms of whiff/swing%, Miley's two best pitches were his slider and his change-up.

Both of those pitches were able to generate whiffs on swings over 30% of the time.

Even though 2011 was a small sample size, both those pitches did a good job at getting whiffs on swings, so going forward it will be interesting to see how batters are able to adjust.

Miley showed flashes of brilliance last season. HIs performance led credence to the idea that Miley could become a solid top of the line starter.

MIley really only has one season worth of innings to his name, so it will be interesting to see how batters adjust to his approach. Either way, expect Miley to be a solid mainstay going forward.