Albert Pujols seems to have lost control of the strike zone, and that's not normal for a hitter his age, or with his track record.

Share All sharing options for: Is Albert Pujols' dwindling plate discipline an anomaly?

Before the 2012 season, Albert Pujols signed a massive ten year contract with the Los Angeles Angels of Anaheim.

Pujols had the reputation for being of (if not the) the best players in baseball. However, paying him over $25 million per year past the age of 40 caused many to be wary.

Factor out April and Pujols' production felt normal and fairly close to what was expected, except for one, very concerning, factor.

Earlier this year in a FanGraphs article, Bill Petti wrote about the declining number of hitters in baseball who walk more than they strike out. Only four qualified hitters accomplished that feat in 2012.

Pujols was one of the rare hitters who still walked more than he struck out. His walk total exceed his strikeout total in every from 2002 to 2011; which is pretty incredible.

Pujols was the poster boy for plate discipline. Yet in 2012, Pujols' walk to strikeout ratio was .68, the lowest of his entire career, and marked the first time since his rookie year that he walked less than he struck out.

Below, I graphed Pujols' walk rate (BB/PA) over his career: 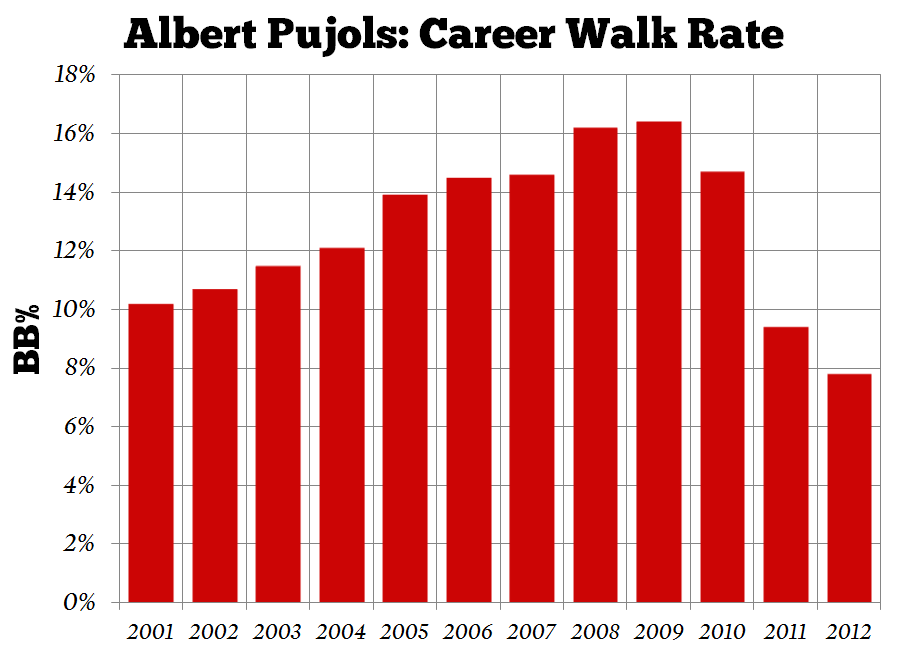 The fall in Pujols' walk rate is as startling as it is disconcerting.

In April, Sam Miller wrote an article entitled "Albert Pujols Never Walks". At the time of that piece, Pujols was struggling, but Sam discussed some of Albert's swing tendencies and how it was possible that the hitter the Angels singed was a different hitter than the one who dominated in St. Louis for so long.

April was Pujols' worst month production-wise; however, it wasn't his worst month in terms of walk-rate:

As you can see from the table, Pujols had a good deal of trouble drawing free passes as the season came to a close.

Weirdly enough, one of Pujols' best month production-wise (175 wRC+) came in August, the month in which he walked the least.

It's possible that Pujols is a different hitter now, like Sam suggested, and he can still succeed without walking as often. However, the difference between Pujols' 2009 production (180 wRC+ , 9.0 WAR) and Pujols' 2012 production (132 wRC+, 3.9 WAR) is not something to simply ignore.

In 2009, when Pujols was walking over twice as much, his wRC+ for the entire season was five points higher than his production over just one month in August of 2012.

The next logical step in evaluating Pujols' declining walk rate would be to consider the fact that he is on the other side of thirty, and could simply just have a declining skill set.

How unusual is it for a 32 year-old to suddenly lose his plate discipline skills?

Petti also had a great piece of research that looked at how plate discipline skills moved with age. The piece is full of informative charts and ideas we can use, but I think this is the most relevant paragraph for discussing Pujols:

Overall, hitters generally decrease their swing rates during their careers. Younger players almost immediately increase their selectivity. In particular, hitters decrease their number of swings at pitches outside the zone. This aligns with the general idea that hitters become more selective the longer they are in the league. But the selectivity doesn’t increase forever. At about age 33, we begin to see a slight uptick in Swing%. Hitters seem to be swinging more at pitches both in and out of the zone.

According to Petti's research, age-32 seems to be the peak season for a hitter's plate discipline, as that year reflects the minimum for both out of zone swing percentage and swing percentage.

I graphed Pujols' PITCHf/x out of zone swing percentages for the years 2007-12: 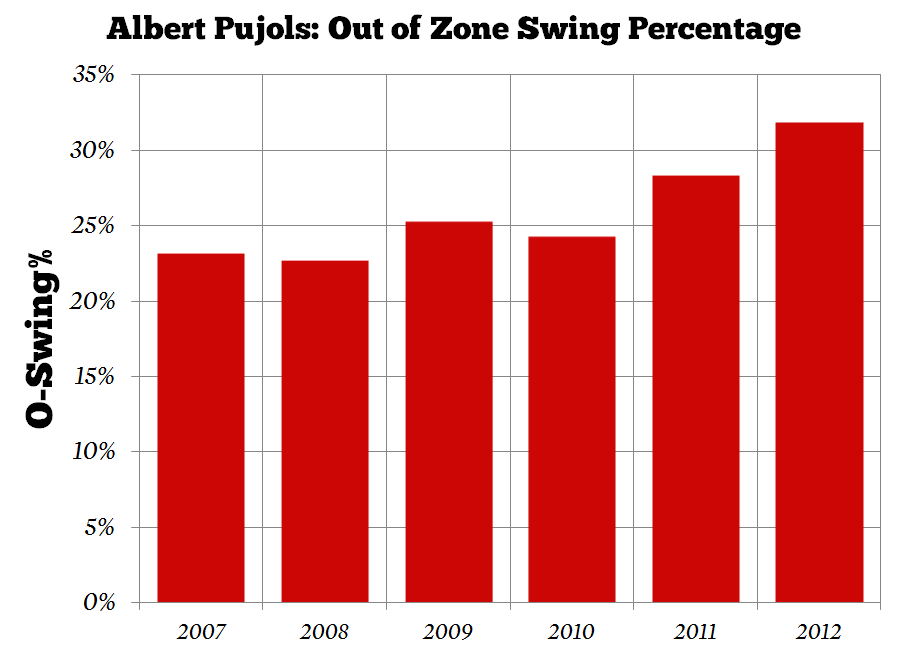 Instead of improving as he neared the peak plate discipline season, Pujols has gotten worse. His swing tendencies on pitches out of the zone are trending in the wrong direction, just like his walk rate.

There were eight age-32 hitters other than Pujols, who received enough plate appearances to qualify for the batting title:

Pujols swung at more pitches out of the zone than any other qualifying age-32 hitter.

These numbers make it seem like the man who was once the model for plate discipline has lost his ability to control the strike zone.

Pujols swung at the same percentage of pitches out of the zone as Athletics outfielder Josh Reddick.

Albert Pujols, a man who has walked over 1000 times in his career, showed similar discipline at the dish as a young swing-happy outfielder with little major league experience.

Should the Angels be nervous?

The Angels owe Pujols $228 million over the next nine seasons.

He is coming off of a season in which he walked less times than any other year in his career, struck out more often than he has since his rookie season and posted the lowest wRC+ of his career, by 14 points.

The Angels are paying Albert Pujols to be the man who used to be. The one who walked more often than he struck out and the one who was at least 50 percent better than the major league hitter.

The only problem is he's trending in the opposite direction and unless that plate discipline returns, it's really hard to see Prince Albert returning to the .330/.430/.600 hitter that he once was.

All statistics come courtesy of FanGraphs