In the ninth installment of Beyond the Box Score's 2012 awards, we offer our picks for the National League's best pitchers.

We've already announced our picks for MLB Executive of the Year, Silver Sluggers (AL, NL), Gold Gloves (AL, NL), and Rookies of the Year (AL, NL). On Tuesday, we revealed our pick for the AL Cy Young, so today we'll look at the results for National League Cy Young. 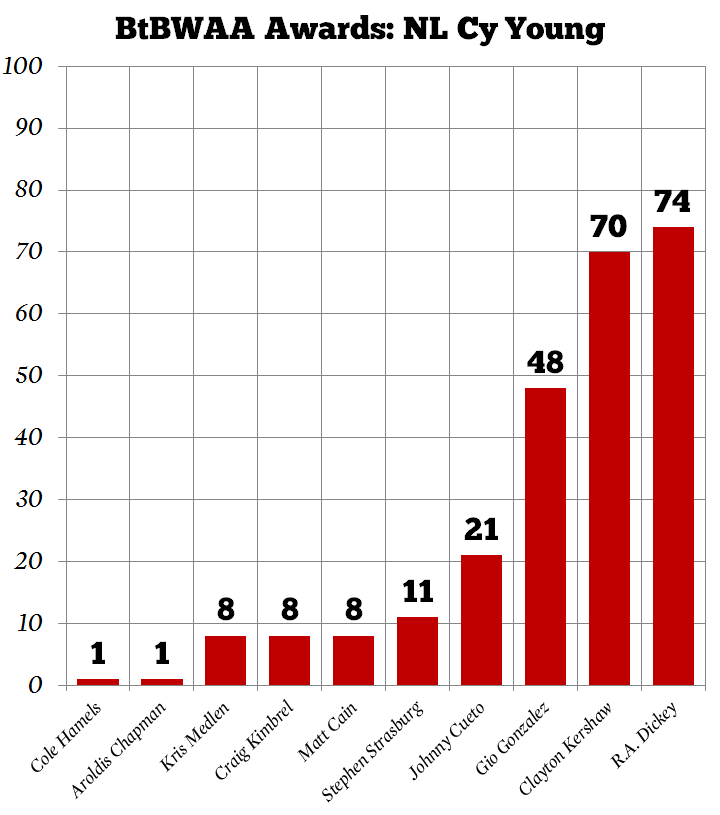 Ladies and gentlemen, your 2012 NL Cy Young is R.A. Dickey, who narrowly edges out Clayton Kershaw for the honors in what was easily our closest vote. Gio Gonzalez takes home the bronze, followed by Stephen Strasburg, Matt Cain, Craig Kimbrel, and Kris Medlen. Cole Hamels and Aroldis Chapman also get a vote apiece.

Our dividedness was reflected in the distribution of first-place votes. Dickey got five, Kershaw got four, and Gonzalez got one (that's me!).

Based on these results, it looks like the BBWAA did a pretty good job. Dickey won the real Cy Young, followed by Kershaw, Gonzalez, and Cueto, in that order.

This was by far the hardest award for me. For those curious, my ballot went: Gonzalez, Medlen, Kershaw, Dickey, Kimbrel, in that order.