The Hall of Fame's Pre-Integration ballot will be discussed and voted on at the Winter Meetings in December. Will Bill Dahlen and Deacon White finally get The Call?

Nothing can get me out of blogging hibernation like a fresh new Hall of Fame ballot. While the 2013 BBWAA ballot isn't out yet, we do have the Pre-Integration Era Veterans Committee ballot to discuss.

The "Pre-Integration" part, of course, means that only players and personnel active before 1947 are considered. Ten names appear on this ballot. Three are from the "pioneer/executive" category and one is an umpire. I'm not very concerned with those four (though I do wonder how Jacob Ruppert isn't in Cooperstown yet). What I care about is the six players.

For this article, I'm consulting my most recent project—The Hall of Stats (Bryan recently wrote about it). I've spent a lot of time thinking about Pre-Integration players who are deserving of induction. Some made it to the ballot. Others did not. Below, I'll share the three players I believe should be inducted this year. I'll also cover the rest of the ballot and deserving players who did not make the ballot. 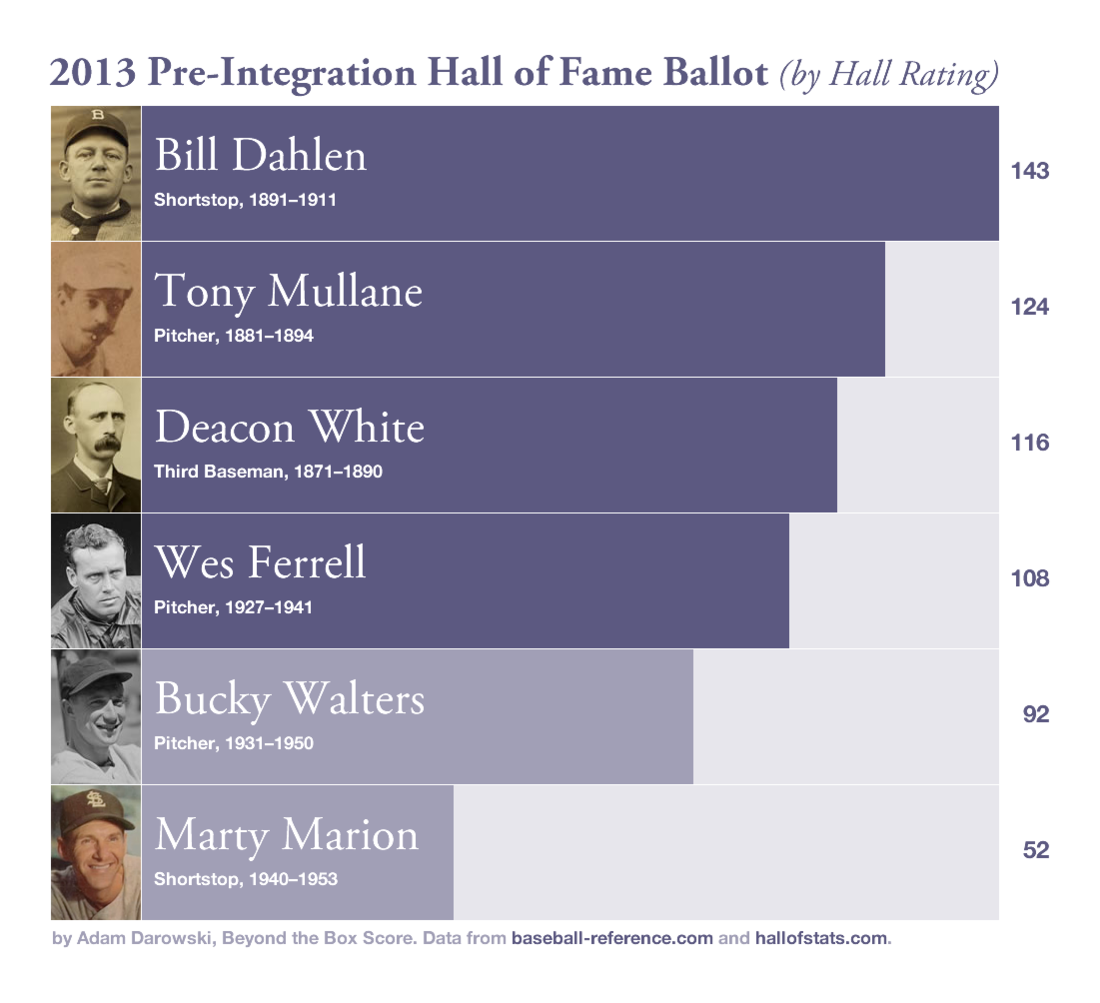 WAR loves Bill Dahlen. Dahlen ranks 75th among all players (includes pitchers) in WAR. He's 47th among position players. Basically, if you even remotely believe in the concept of WAR, Bill Dahlen is a slam dunk Hall of Famer.

In terms of Hall Rating (which I use at the Hall of Stats—it's based on WAR and Wins Above Average), Dahlen is seventh among Hall-eligible shortstops (with four more very close behind him). His Hall Rating is 143 where 100 is the Hall-worthy borderline. For comparison, Honus Wagner is a 283, Ozzie Smith is a 146, Pee Wee Reese is a 119, Joe Tinker is a 102, and Rabbit Maranville is a 71.

Dahlen, who was selected as SABR's Overlooked 19th Century Baseball Legend for 2012, wasn't a dominating hitter. His 110 OPS+ is derived from a .272/.358/.382 slash line. He collected 2461 hits, but it took him 21 years. That said, he was still an above average hitter for a very long time. He has always had a reputation as a fantastic defensive player and his +139 Total Zone runs confirm it. Add in is +145 positional runs and his WAR adds up quickly.

Deacon White's career, quite literally, pre-dates recorded history… recorded baseball history, that is. White, SABR's Overlooked Legend choice in 2010, played for the Cleveland Forest Citys in 1868, three seasons before the National Association (considered by many to be the first major league) began play.

Unfortunately, White only had 846 hits across those nine seasons because he only played 525 games. Injury problems, you ask? Nope. Back in the 1870s, schedules were incredibly short. In fact, over the course of the decade, White missed only eight of his team's games. Did I mention he was a catcher? And that he caught in a period before gloves?

White accumulated 24.2 WAR in those 525 games. His teams played just 533 games in that time. Prorate those 533 games across nine 162-game seasons and suddenly White could have 67.2 WAR. Of course, it's impossible to say he would have accumulated that WAR total across full seasons, but it gives you an idea of White's relative value.

I believe White is very much worthy based on statistics alone. But he brought more to the table as well. He collected the first hit—and made the first catch—in Major League history. He was an early opponent of the reserve clause, muttering the famous line "no man is going to sell my carcass unless I get half". Oh, and that mustache…

I while back, I compared Wes Ferrell to Sandy Koufax. The premise of the comparison was that both pitchers had very high peaks and had their careers derailed by arm injuries. Once you factor in their respective eras (Ferrell played in an offensively-domainated era while Koufax played in the exact opposite) and offensive contributions (Ferrell was the best hitting pitcher ever while Koufax was among the worst), they actually even out. In fact, Ferrell comes out slightly on top.

I think everyone at least subconsciously understands that part of what got Koufax into the Hall of Fame so easily is the fact that he was hurt before he was done building his career totals. That's essentially what happened to Ferrell, too. It wasn't as immediate and at such a high peak as Koufax, though.

It's obvious what kept Ferrell out of the Hall of Fame—his ERA was over 4.00 and he won fewer than 200 games. But he's the only eligible non-Hall of Famer to win 20 games six times. And besides, high peak guys like Koufax and Dizzy Dean didn't win 200. I see Ferrell in a similar light.

In regards to the ERA, Ferrell's ERA+ comes out to 116. That's actually better than Steve Carlton, Fergie Jenkins, Nolan Ryan, Pud Galvin, and several other no-doubt Hall of Famers. So, it's not much of an issue with me. Remember, Jack Morris had a 3.90 ERA and a 105 ERA+.

I'm not alone in my support of Ferrell. The last time he was on a Veteran's Committee ballot, he received 50% of the vote. Deacon White received 41.7% while Bill Dahlen's vote total is unknown (he had no more than 25%).

The Rest of the Ballot

I would have no problems with 19th century hurler Tony Mullane making it into the Hall of Fame. His Hall Rating of 124 is impressive. I'm still having difficulties rating 19th century pitchers, however. A ton of them make the Hall of Stats and clearly not all should be inducted. I like Mullane more than most of the others, as he had a very consistent, lengthy career during a time when many pitchers did not. But if Mullane, why not Tommy Bond, Jim McCormick, Charlie Buffinton, Bob Caruthers, or Bobby Mathews? You can't put them all in. I just don't know who the best candidate is yet. It might be Mullane (although, as written below, I'm partial to Caruthers).

Bucky Walters deserves to be on the ballot. I just don't feel compelled to support him for the Hall of Fame. He has a solid Hall Rating of 92 and had a really nice three-year stretch where he was worth 23.2 WAR. Extend his peak to six years and he won an MVP award, led the league in wins three times, ERA twice, complete game three times, and was 121-73 with a 2.67 ERA (134 ERA+). He was worth 29.9 WAR as a pitcher during those six seasons (and another 5.2 as a hitter… he was actually a converted infielder). Half of this peak, however, came during World War II when the talent level was depleted (granted, he was most valuable during the first three years, when the War had not yet started). He wouldn't be the worst Hall of Famer, but there are better players to induct first.

Lastly, Marty Marion was a great defender (+130 runs by Total Zone), but his Hall Rating of 52 shows that he's just nowhere close.

Just last year on these pages, I made my case for Dahlen and Deacon. When I did that, I made my case for a third 19th century player—Bob Caruthers. While the latest version of wWAR isn't as bullish on Caruthers as previous ones, I still very much support him (and his 118 Hall Rating). It's hard to completely capture Caruthers in a single metric—he was the best pitcher in the history of the American Association and a deadly hitter to boot. I'm not talking a Wes Ferrell-type hitting pitcher. I mean that Caruthers played other positions when he wasn't pitching—and was one of the most valuable hitters in the league.

Jack Glasscock (and his 133 Hall Rating) should also be on this ballot. However, it's hard to make a case for Glasscock before Dahlen is in. They were similar defense-first shortstops, but Dahlen has the better case. Glasscock's case also depends more on his defensive run values being correct—something we can't be too sure of since they are based on events that happened over a century ago.

For me, however, it is most certainly Dahlen and the Deacon. I support Ferrell as well, but I also acknowledge that much of my love of Ferrell is subjective. I'm a sucker for a unique player (like Caruthers).

How much attention are you paying to this Hall of Fame ballot? Who do you support?