After putting up an MVP caliber year in 2011, Justin Upton had a down year in 2012. Now the Diamondbacks put him on the trading block. Again. Are they freaking insane or just moderately terrible at this? Let's look.

When Justin Upton was in the minors he was one of the more hyped prospects in a while. After playing 151 games from 2007-2008 Upton finally broke out during his 2009 campaign. He was only 22 years old, and it appeared that the sky was the limit for the younger brother of B.J. Upton.

From 2009-2011, Upton was one of the best outfielders in all of baseball. During that time he totaled 14.2 fWAR, which comes out to 4.7 WAR per season. Not bad for a guy in his early twenties. 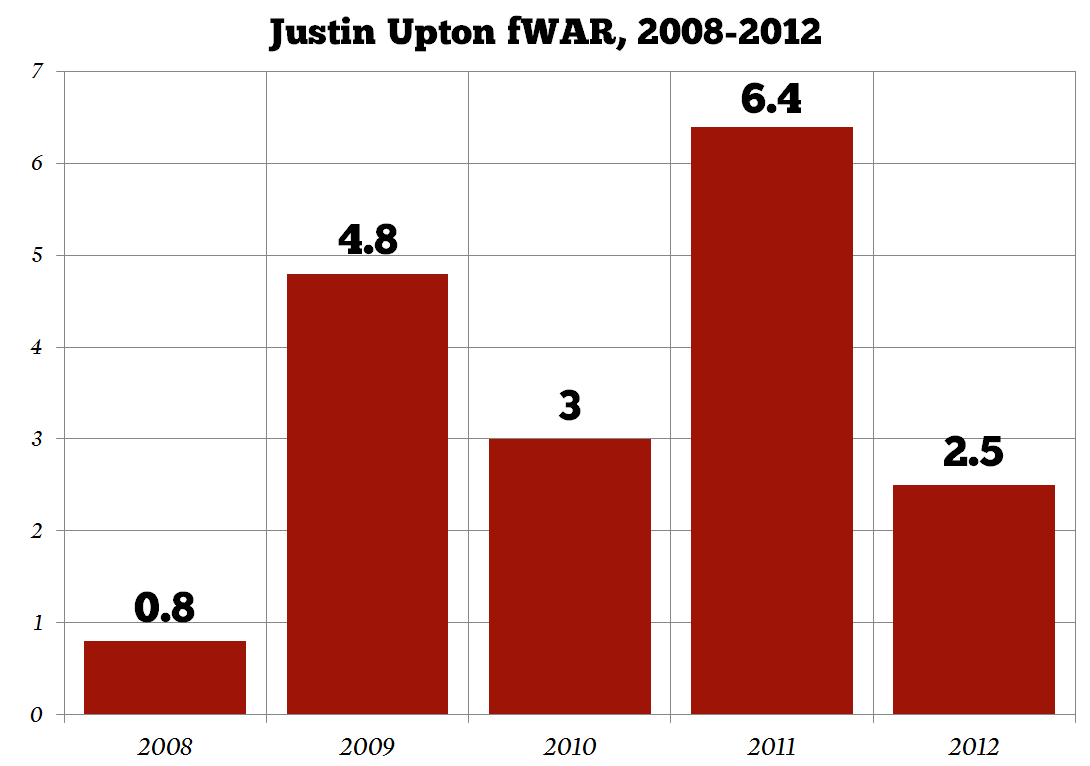 In 2009 he had a solid season, posting 4.8 WAR, but took a little step back in 2010. The following season he really broke out and posted a 6.4 WAR. Many thought Upton was finally reaching his potential.

In the above chart Upton ranks sixth among all outfielders in fWAR since 2009-2011, and is even ahead of a guy named Josh Hamilton. He displayed impressive power, but his plate discipline was a bit of a problem. Ultimately it appeared that we had a little star on our hands.

Justin Upton was not the same player that we were used to seeing. His ISO dropped from ..240 to .150, a change of .090 points. Besides the drop in power though not much else changes. Even though his K% rose by .6%, he actually saw his BB% increase by over 1%. Seeing his plate discipline improve is definitely a positive.

In 2012 he hit more groundballs as well. His career average groundball percentage is around 40%, but in 2012 he hit groundballs 43%. When he had his breakout year he only hit groundballs 37% of the time. Upton suffered a thumb injury nearly the whole season though, and that could definitely be a big reason as to why Upton saw such a huge drop in his power production. 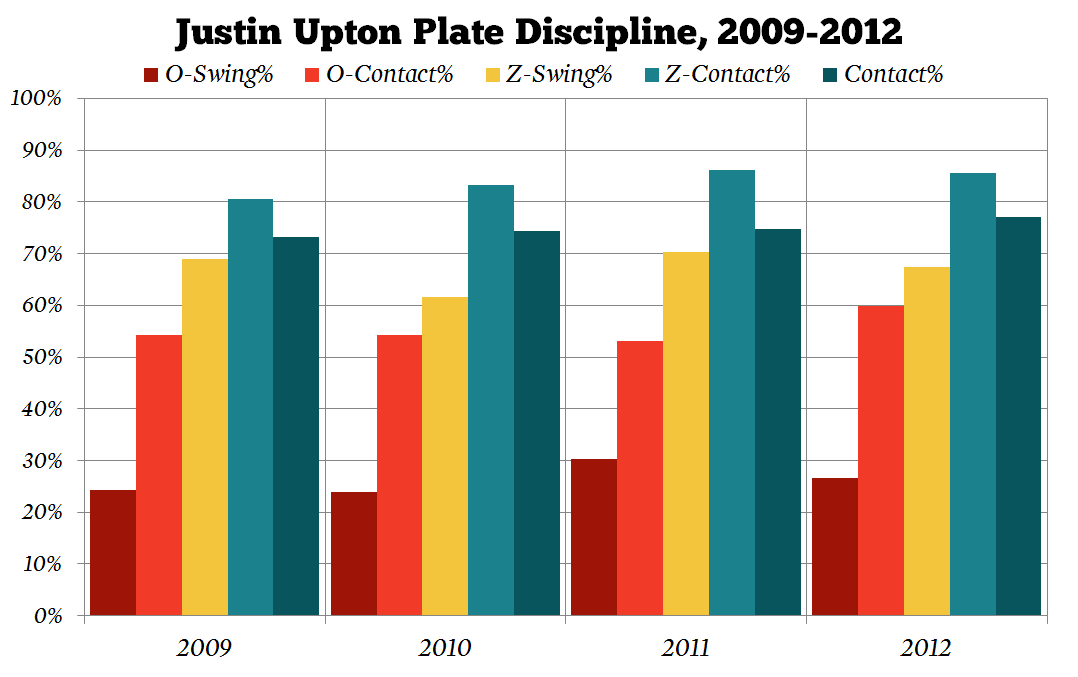 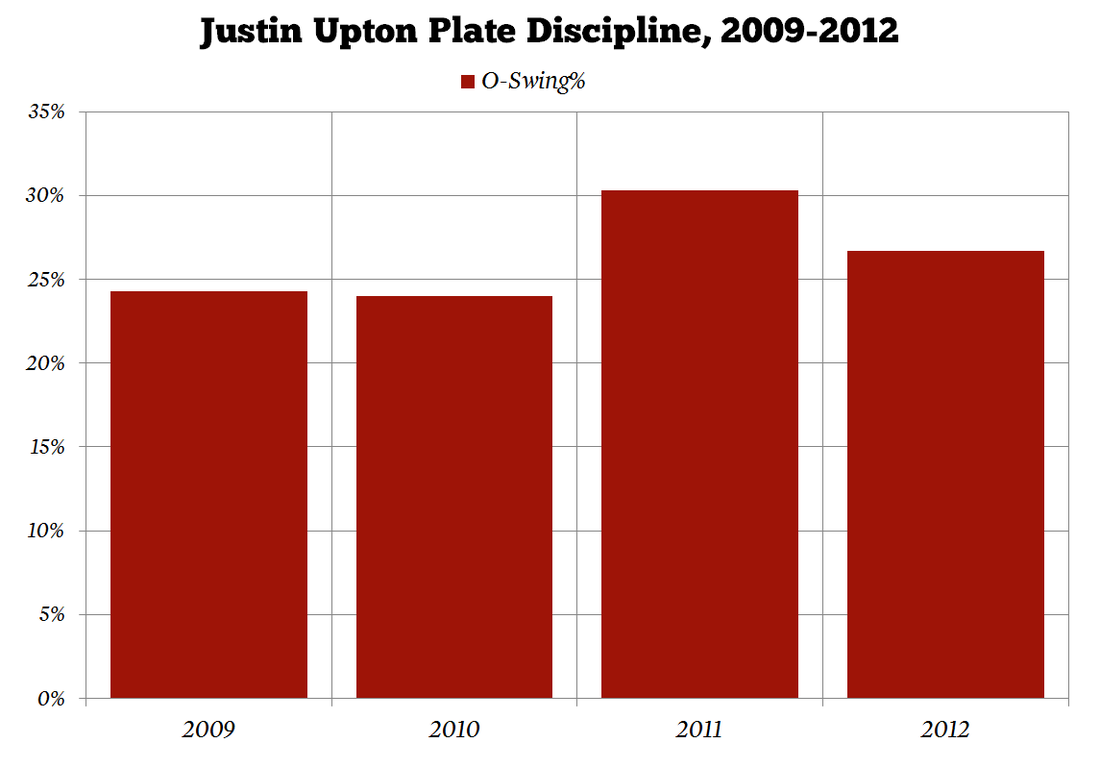 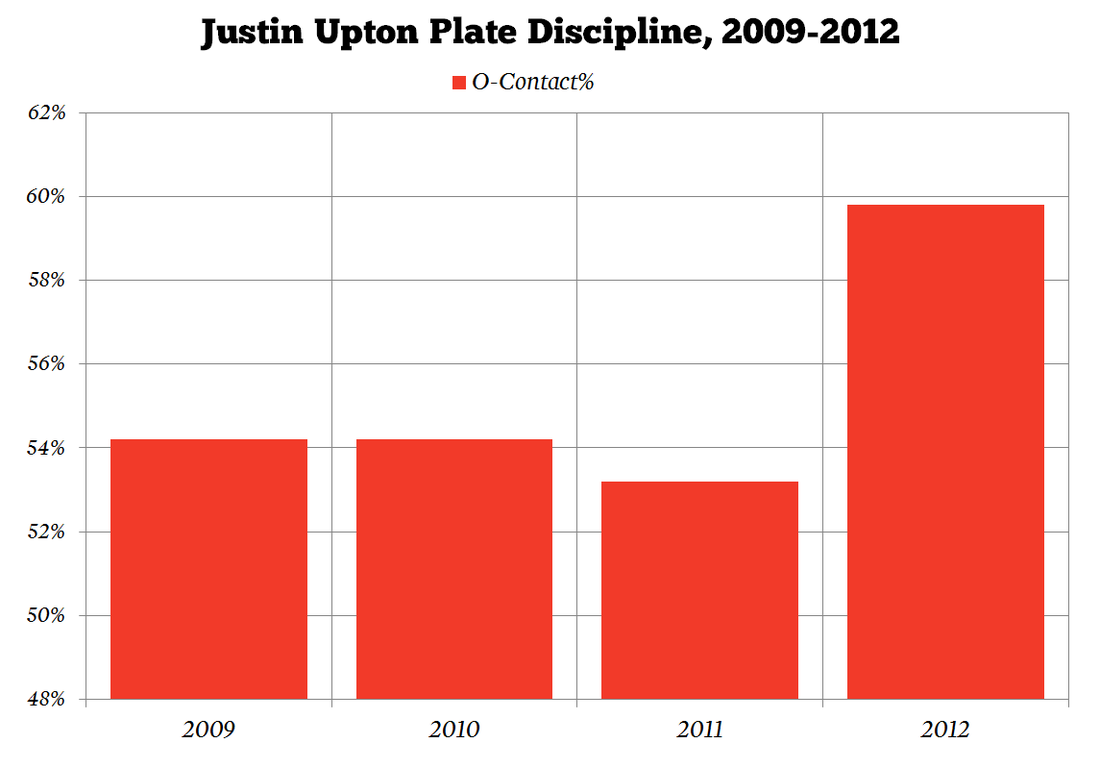 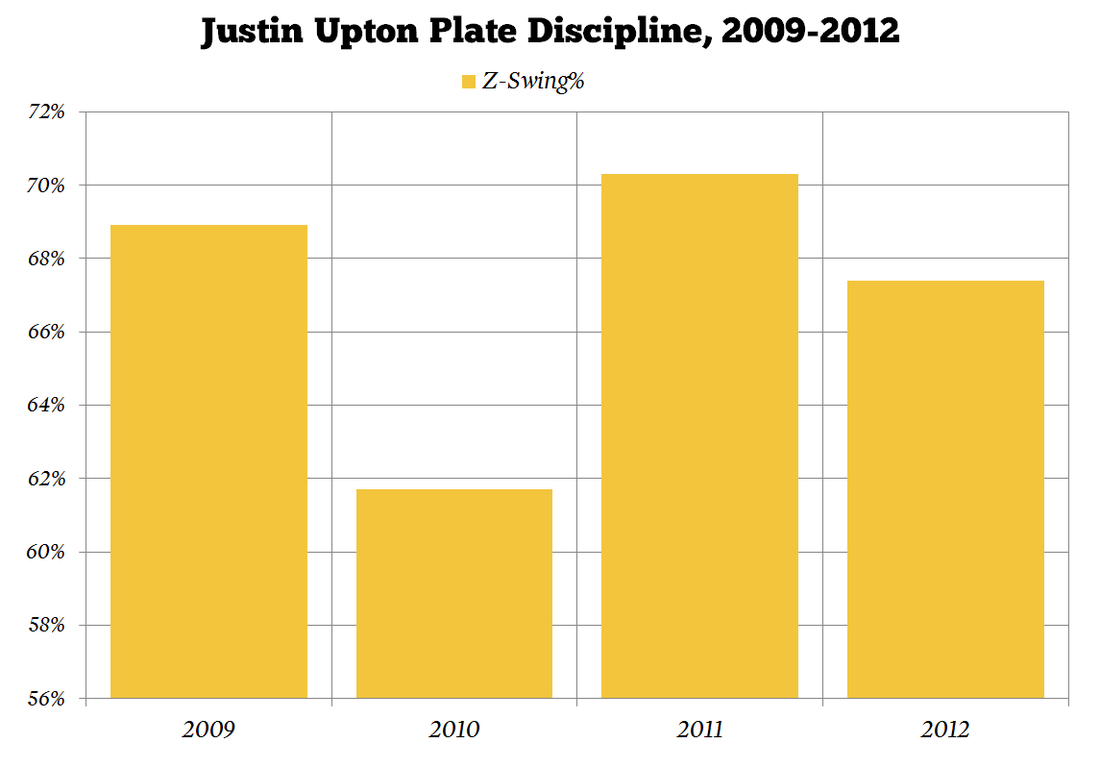 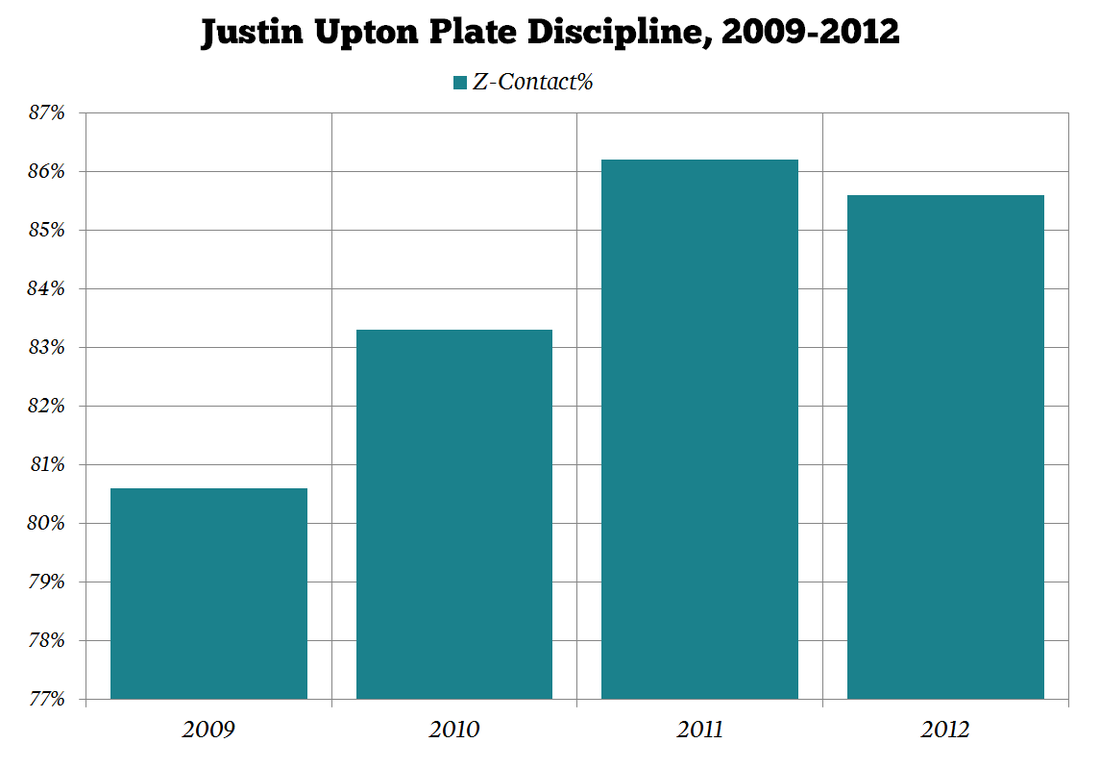 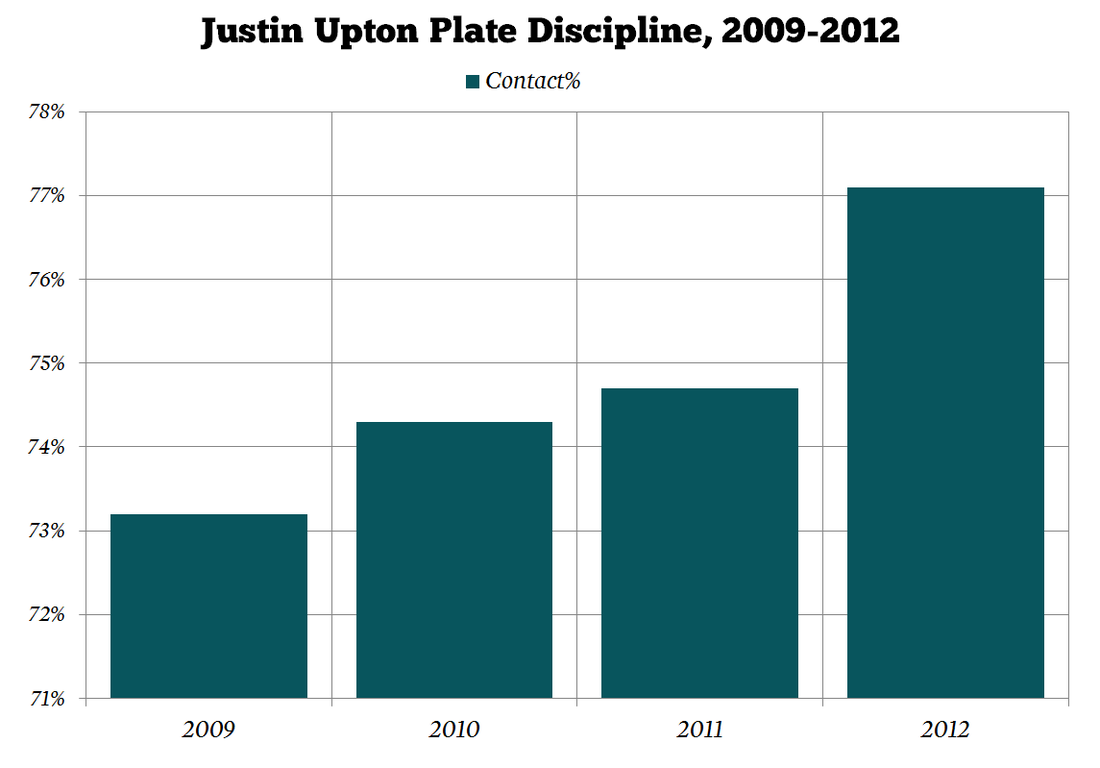 Upton also saw a pretty significant home and away split. While it's expected that one performs good at home, Upton was far worse on the road in 2012 than he was in 2011.

In 2011 Upton did a good job showing above average power both at home and on the road. He was also to post an above average wRC+ while away from Chase Field.

2012 was a different story though. On the road his power was non-existent, and he was creating runs 21% worse than league average. Now this could also be a direct result of his thumb injury.

I believe a lot of Upton's struggles can be due to his year long thumb injury. Upton is also just beginning to enter his prime, but it appears that he's fallen out of favor with the Diamondbacks. Two potential trading partners that have been thrown around lately are the Rays and the Rangers. It will be interesting to see if one of those teams are able to pull off a deal, but I don't know if I'd be in such a rush to trade a player that was an MVP candidate two seasons ago.