A look at pitch velocities of pitchers in years immediately preceding Tommy John surgery as compared to the league average pitcher.

Share All sharing options for: Tommy John Surgery and Pitch Velocity, Part I

Last week, I introduced what we believe to be the most complete list of baseball players that have undergone the UCL reconstruction procedure that has come to be commonly known as Tommy John surgery.

With a relatively large sample of major league pitchers on the list, there is ample opportunity for many different studies relating to the surgery. Earlier this week, I investigated whether pitchers heading toward Tommy John surgery tend to throw certain types of pitches more than the average pitcher. I found that such pitchers tended to throw slightly more fastballs and sliders, and slightly less curveballs and changeups than the average pitcher in their peer group. In the near future, I will look at whether pitchers tend to alter the frequency of use of certain pitches after successfully returning to the big leagues following the surgery.

Today I will look at another area of interest to me with respect to pitchers and Tommy John surgery, namely the velocities with which they throw their pitches in the years leading up to their looming surgery as compared to the league average pitcher. Again, in the coming weeks I will return to determine whether there are any trends in pitch velocity visible in the years following the surgery.

As in the previous study on pitch mix, I will use the Baseball Info Solutions data that has been available since 2002. By restricting my view to the pre-surgery years, it allows me to include any pitcher from the list that pitched in the major leagues leading up to their surgery since 2002, regardless of whether or not they successfully returned to pitching after the surgery and lengthy rehabilitation period.

The idea will be to compare the average pitcher that received Tommy John surgery to the league average pitcher with respect to pitch velocity. In order to attempt to make this comparison fairly, I will control for two factors that can significantly affect the speed of pitches.

The following two graphs show the breakdown of average pitch velocity by age for starting pitchers and relief pitchers. They serve to highlight the importance of controlling for these two factors in this comparison process. Note the overall downward velocity trend in as pitchers age in the graphs. 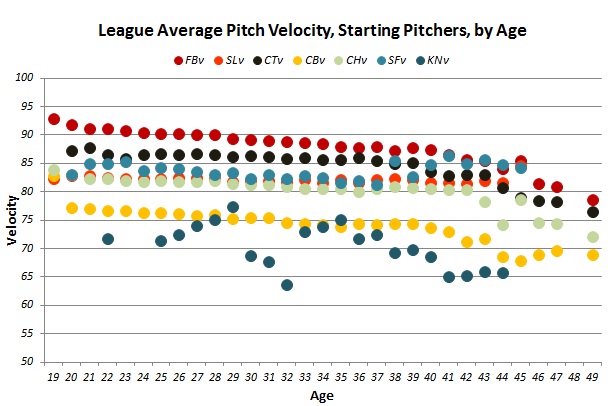 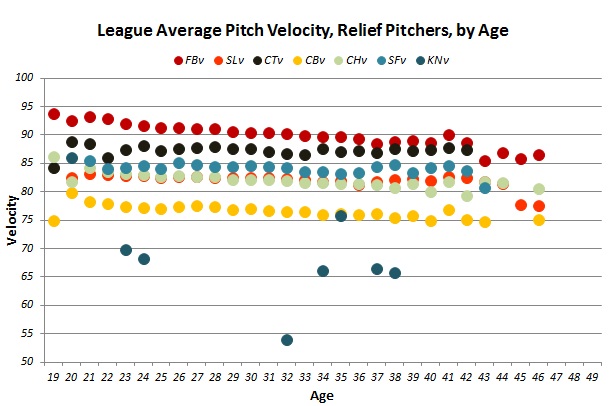 Similar to the strategy used in the previous study on pitch frequencies, the comparison will be to contrast the pitch velocity of each Tommy John recipient that meets the requirements for this study to the league average pitcher of the same age that performs the same pitching role.

I will then take the average of all of these differences to form a pitch velocity profile of the average Tommy John pitcher in the three seasons leading up to his surgery as compared to the league average pitcher. Since each pitcher's pitch velocity delta is controlled for pitching role and age, I feel that I can take the average of the deltas of all Tommy John pitchers at this point without any further weighting. For the purposes of this study, I used every pitcher that appeared as a pitcher in the major leagues between 2002 and 2012. I defined a starting pitcher as any pitcher that started at least one game in a given season.

The table indicates that the average pitcher headed toward Tommy John surgery tends to throw every one of these types of pitches at a faster velocity than the league average pitcher of the same age and pitching role. Intuitively, this makes sense as a finding, as with all other things being equal, I would think that throwing the ball harder would cause more strain on the arm. It is noteworthy that the higher velocities are across the board, and across all three years leading up to the surgery.

Another interesting observation is that for five of the six pitch types, the velocity delta above the league average pitcher dropped in relative terms in the year of the surgery as compared to the year prior to the surgery. The differences are again small in this case, but I could believe that this may be the case due the arm already wearing down on its way to requiring Tommy John surgery.

One other clarification to make here is regarding the sample sizes, and why they differ among the three years. There are two main reasons for the differences.

This marks the second of a series of follow up studies based on the compilation of a list of pitchers who have undergone Tommy John surgery. To this point, all I have been able to say is that the results for the most part at least make logical sense. In the next article of this series, we will seek some help to look at the latest scientific pitching biomechanics research in an effort to determine whether our findings to date agree with academic research findings.