Steve Johnson and Miguel Gonzalez came out of nowhere to contribute almost 2 WAR to the Orioles in a race where every win counted. Let's take a closer look at how they did it.

I pride myself on knowing every player, on every team, in every organization. When the Baltimore Orioles featured two pitchers down the stretch I had never heard of, it caused me great distress. What made it worse was that not only were they unheard of by me, but they were pretty good.

I'll start with Johnson, the 25 year old right-hander. He pitched in 12 games for Baltimore, starting four of them and throwing a total of 38.1 innings over those games. He posted an ERA of 2.11, but his FIP pointed to some luck there as it was 3.46. Looking a bit closer, it appears as though luck may have been a big factor in Johnson's success, as he stranded an extremely high 90.4% of the runners he had on base this past season. Not helping his case is his exceptionally low .229 BABIP.

To stop there however would be a disservice to Johnson, as he was not all smoke and mirrors. He posted a very high 30.5% K-rate over the 38.1 innings he pitched, which may explain how he was able to have such a high strand rate. He also did not have a platoon split in his short stint for Baltimore, with lefties posting a wOBA of .257 off of him as opposed to righties who posted a .251 wOBA.

One reason Johnson was able to fare so well against lefties despite his 89.9 MPH fastball, is that his change-up is very effective against left-handed batters. Johnson coaxed lefties into a 17.28 whiff rate on his change-up (small sample warning is important for this entire section), and only putting the ball in play 18.52% of the time off of it.

Two key factors may have led to its effectiveness: 1.) He didn't tip it, as one can see below, the difference to lefties between his fastball and change-up was near-impossible to make out, and 2.) the pitch came in on average at 79.65 MPH, or roughly 10 MPH less than the fastball.

As I mentioned above, not only did he disguise it well, but he kept a 10 MPH difference between the two pitches' velocities, as one can see in the chart below. Without this he could hide it all he wanted, but batters would still be able to make contact or at least foul the ball off at a high enough rate to cancel out the whiffs he generates on it. 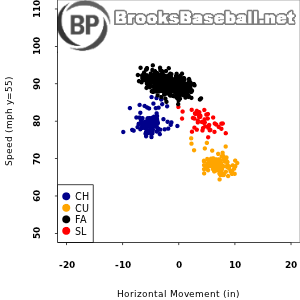 Johnson also mixes in a slow-curve which he throws at 68.38 MPH on average, using it to even further change speeds. Against lefties, Johnson liked to use this pitch most frequently to start counts off, getting mixed results. As one can see in the chart below, Johnson struggled to throw it for strikes, throwing just 7 out of the 17 first-pitch curves in the strike-zone, 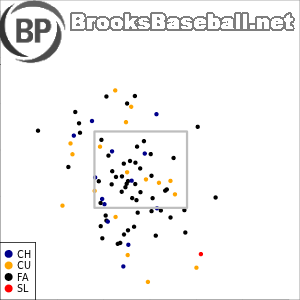 That is how Steve Johnson attacked lefties, but how did he get righties out as well? Well two main differences here: more sliders, and less change-ups. Against righties Johnson mixed in an 80.03 MPH slider 11% of the time, only throwing it 5 times total to lefties. His plan of attack versus righties included a four-pitch mix including the slider, his four-seam fastball, his change-up, and the aforementioned slow-curve.

His secret against righties was mixing his four pitches evenly, not straying more than 10% above or below the baseline amounts that he throws each of his four pitches when facing righties, with those amounts being 67% for the fastball, 10% for the slider, 16% for the curve, and 7% for the change. The decreased use of the change-up is not unusual, as many pitchers use the pitch to get opposite-handed batters out.

As long as Johnson can continue to be effective with his change-up versus lefties, and mix his pitches well when facing righties, he should be able to carve out a niche on the Orioles pitching staff next season, potentially even in the starting rotation again.

So at this point you must be sitting there, saying "I just wasted 5 minutes of my Monday for this?" I would respond to this by saying "remember, we're only halfway through, the best part is coming up when I look at Miguel Gonzalez."

Miguel Gonzalez is a 28 year old pitcher, and Baltimore is his third organization. This coupled with that fact that he contributed 1.1 WAR to the Orioles in 2012 should just about sum up the insanity that was the 2012 Baltimore Orioles.

Gonzalez pitched in 18 games this year, starting 15 and throwing 105.1 innings over that span. He posted an ERA of 3.25 and a FIP of 4.38, once again pointing to some potential luck factoring into his success. His 82.6% strand-rate and .260 BABIP point to some minor amounts of good fortune, but nothing obscene.

While according to his pitch F/X mix he throws five pitches, I believe it is only four as his sinker and his regular fastball seem to be the same pitch. They cluster in the same area and behave relatively similar, so I will group them together into one pitch. You can observe this in the chart below. 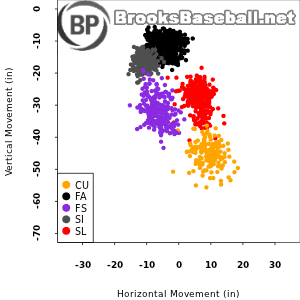 Against right-handed hitters, Gonzalez uses his slider as his main secondary pitch, throwing it 25% of the time on average. The average velocity for the pitch is 85.6 MPH, acting similarly to his splitter while featuring more horizontal movement away from righties (see chart above). He strangely elects to go away from this pitch with two strikes against righties, instead using a slightly higher amount of his other pitches, but using his splitter 7% more frequently than average. With two strikes against righties, the splitter has a 33.33% whiff/swing rate.

Against lefties, Gonzalez changes his arsenal a bit, featuring less sliders and more splitters (his version of the change-up). Gonzalez throws the splitter 20% of the time in every count except for first-pitch, showing the importance yet again of the change-up against batters of the opposite handedness. The splitter is quite effective against lefties, as he has a 44.53% whiff/swing rate when throwing the pitch to left-handed batters.

He mixes in the slider and curve roughly 10% each against right-handed batters, with the slider inducing ground-balls on more than half the balls in play that are hit off of the pitch. The curveball is his slowest pitch, coming in at 78.27 MPH and he throws it for called strikes better than any other pitch against lefties, doing so at a clip of 31.85%.

After looking at both of these pitchers, one can see that despite the factor that luck may have played in the Orioles improbable success, it is also important to remember that they did some of the work. Without finding players such as Steve Johnson and Miguel Gonzalez, Baltimore never would have been able to survive injuries to starters such as Jason Hammel.

Thanks to Fangraphs for the stats, and TexasLeaguers and BrooksBaseball for the pitch F/X data.