In the fifth installment of Beyond the Box Score's 2012 awards, we offer our picks for the National League's best fielders at each position.

Two weeks ago, we kicked off our awards announcements by revealing our pick for MLB Executive of the Year, and last week we followed up with our Silver Slugger picks (AL, NL). On Wednesday, we turned our attention to the best fielders in baseball with the AL Gold Glove awards, which means today we award gilded hand-covers for the National League. 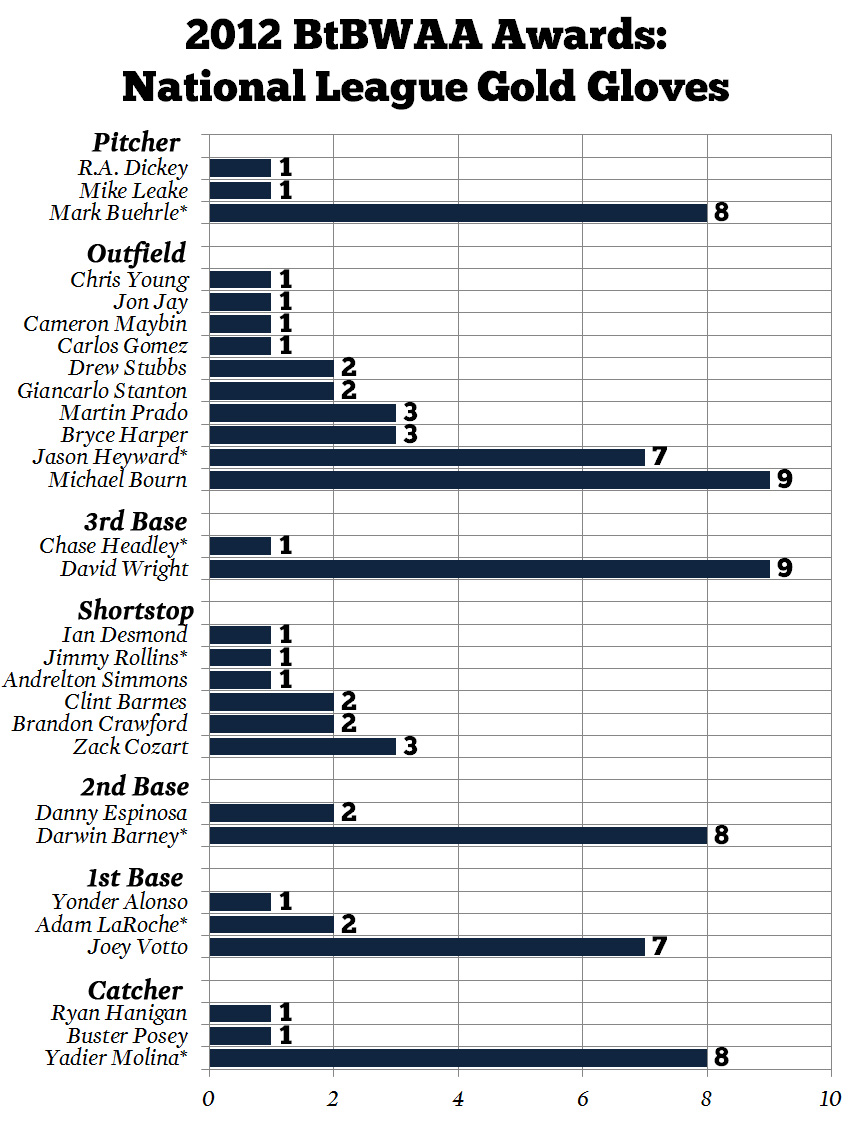 First off, let's note the absence of any unanimous winners. David Wright's victory at third base was the most commanding victory anyone got here, though Mark Buehrle and Yadier Molina have a pretty strong mandate to make up our NL battery. There's also a pretty clear consensus for the right side of the infield with Joey Votto and Darwin Barney at first and second base, respectively.

Outfield is where it gets interesting (note that we used the pre-2011 Gold Gloves system, in which all three positions are grouped together). Michael Bourn gets near-unanimous support, with Jason Heyward also earning a supermajority of votes. Yet there's a tie for third place between Bryce Harper and Martin Prado (so the Braves still sweep) and six other candidates receiving votes.

But NL shortstop was the most intriguing position in either league. Zack Cozart wins with only three votes, while six different candidates—Cozart, Brandon Crawford, Clint Barmes, Andrelton Simmons, Jimmy Rollins, and Ian Desmond—got at least one of the 10 available votes. It's safe to say this was a close one.

The real-life voters hit under .500 on this one, going 4-for-9 compared to our picks. We agreed on Molina, Barney, Heyward, and Buehrle. Three of the other winners—Chase Headley, Adam LaRoche, and Jimmy Rollins—got at least marginal support from us. But the other two outfielders, Andrew McCutchen and Carlos Gonzalez, weren't named on a single one of our ballots. Not cool, Rawlings.