The Evolution of Yu Darvish

Yu Darvish went from a good, but not great, pitcher all the way to one of the best in the majors. How did he do it, and is it sustainable?

Share All sharing options for: The Evolution of Yu Darvish

When Yu Darvish arrived in the United States, the Texas Rangers expected big things, and rightfully so. He posted ridiculous numbers in Japan, and many people expected immediate results. Unfortunately, things didn't turn out exactly as planned. During his first twenty starts in the big leagues, Darvish struggled with his command and had a middle-of-the-road FIP.

Around August, Darvish began to hit his stride. I was curious as to why, so I went and looked at FanGraphs's game logs, as well as Brooks Baseball and Texas Leaguers. On those sites, I split Darvish's season into two parts. The first part started on April 4th, and ended on July 26th. The second part spanned from August 1st, and end on September 30th. First, let's look at Yu's first twenty starts.

Like I mentioned before, his FIP is above-average, but it isn't what we expected to see when he came over. The two main culprits were home runs and walks. During that time, Darvish gave up 11 home runs in 119.3 innings. That's not a huge number, but it's something that did affect his FIP. But the biggest issue he had was his issue with walks; 13% is an extremely high number. According to FanGraphs, a 10% BB% is considered "awful", so that means 13% is really bad. The first thing that I thought of when I saw that number was that something with his release point must be off. Texas Leaguers allows you to see release points for specific dates, so that's where I was headed.

Just by looking at this graph we can see that Darvish's release points were all over the place. In particular it looks like he had a little trouble consistently releasing his cutter, and slider at the same point. It's even possible that he was tipping his pitches a little. Darvish does have a lot of pitches though, so it's also possible that some of it was a result of mis-classification.

Something caused Darvish to make a complete 180 though, because starting in August he became one of the best pitchers in baseball. I don't know if he worked with the pitching coach or what, but his release points looked completely different.

This set of release points look much tighter, and with it came impressive results. With the other graph it appeared that he might have been tipping certain pitches, but in this one it's very hard to tell. Here are the results that came with it. This came from 67 innings, so I know there is a small sample. It's also possible that camera adjustments had something to do with the difference in release points.

He decreased his FIP by more than a run, and saw an increase in his K%. He also decreased both his BB% and HR/FB. The home runs could be attributed to bad luck, or just plain bad pitching. While his BABIP did change by .010 points, that isn't considered significant.

I wanted to dig a little deeper though, so I looked at how often Darvish threw his cutter, compared to his other pitches and to see how much they whiffed. Here a few charts to help illustrate: 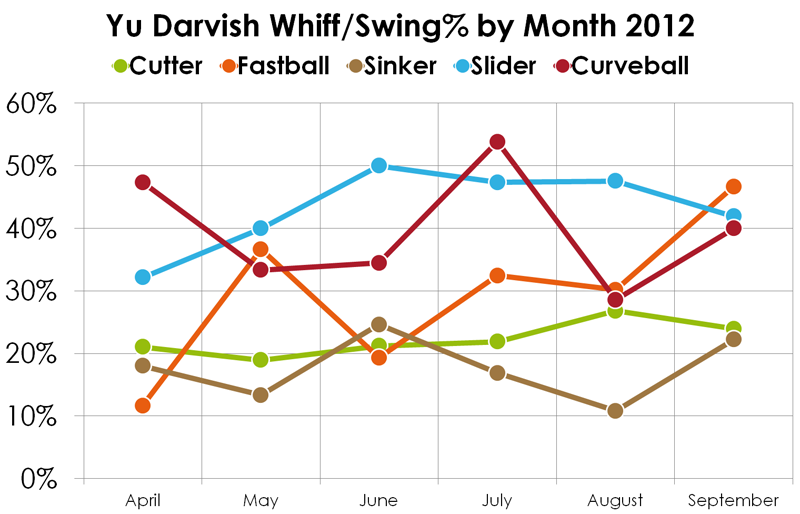 This graph shows how much batters whiffed when they did swing. From April to July, batters whiffed at Darvish's cutter between 18%-21% of the time. In August, they whiffed 26%, and that is around the time where Darvish really began to turn it on. In September they whiffed over 23% of the time. The last two months of the season his cutter also had some more movement, +6.09 vertical and +2.02 horizontal.

The first four months of the season it was +5.64 vertical and +1.68 horizontal. We are dealing with a small sample though, and it's possible that the positioning of the cameras was also a factor. After struggling with his fastball early on, batters also started whiffing a lot more in the later months. I don't think it's a secret that if he's really corrected his release point, that combined with increase use of his cutter allowed him to reach his true potential. 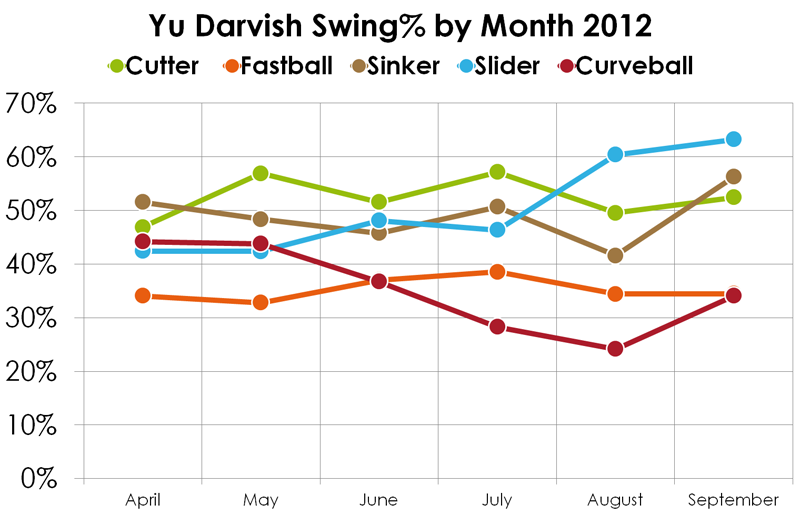 Interestingly batters swung between 43-53% of the time when Darvish threw his curve, and then for one reason or another it made a huge spike in August and September. Batters also stopped swinging as frequently at his curveball when July came. His cutter's swing% appears to have fluctuated all season. 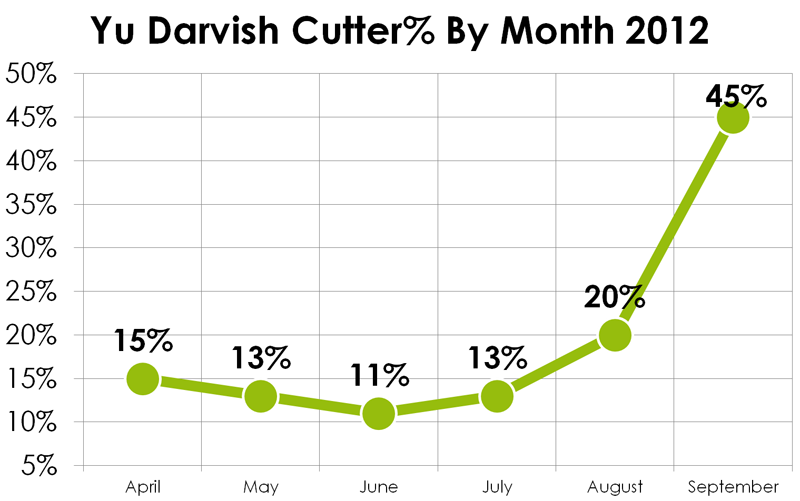 Going into next season it will be interesting to see if Darvish maintains the dominance that he had the last two months of the season. The Texas Rangers certainly hope so, because he is exactly the ace that the Rangers need.