In an incredible season of baseball, which players brought the most value ($) to their teams?

Share All sharing options for: MLB's Most Valuable Players: 2012

At the end of May, I wrote about baseball's most (economically) valuable players up until that point in the season. I then updated the list near the end of July.

Now that the regular season is over, I was able to create one final list.

For those who missed the first two pieces, the methodology behind "most valuable" is a simple profit equation. I used FanGraphs' WAR defines on-field production (value) and a player's salary represents the cost. The price for one WAR that I use is $4.5 million.

The formula for profit or net value is:

In the previous posts, I displayed the leaderboards in the form of a table. However, to be more aesthetically, I graphed the results. 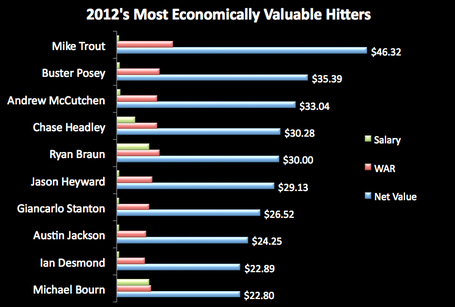 I also displayed a sortable leaderboard in table form, below, for those who like tables:

It shouldn't surprise anyone that Mike Trout was far and away the most valuable hitter this season. It may surprise you though that he contributed almost $50 million in surplus value to the Angels; which just adds to Trout's list of incredible accolades .

The rest of the top-five, Buster Posey, Andrew McCutchen, Ryan Braun and Chase Headley are all NL MVP candidates.

I think it's pretty amazing (amusing?) that Austin Jackson contributed $24.25 million in surplus value to the Detroit Tigers, but their AL MVP candidate, Miguel Cabrera, only contributed $11.4 million.

Two members of the Atlanta Braves outfield made the list. Today, our own Bryan Grosnick questioned whether or not we should trust their production. Even if you agree with Bryan's case, it's hard to deny the fact that Michael Bourn and Jason Heyward were very productive for Atlanta, at a relatively low-cost. 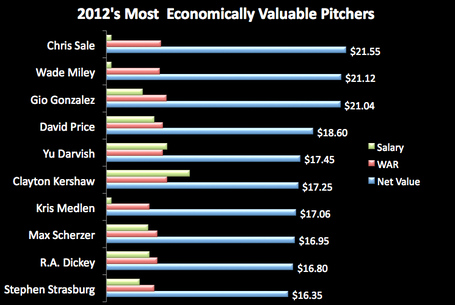 Chicago White Sox starter, Chris Sale, is 2012's most valuable pitcher. Similar to the list of hitters, a bunch of Cy Young candidates from both leagues reached this list, as well as, a candidate for N.L. rookie of the year.

Two of the other interesting members of this list are Kris Medlen and Stephen Strasburg. Medlen, who began the season as a reliever, came out of nowhere with an incredible second half, as a starter, and will start in tonight's NL Wild Card play-in game. Strasburg was so effective during his innings, that he was able to hold the ten spot on this list, despite being shutdown before the end of the season.

I didn't factor the Rangers posting fee into Yu Darvish's salary. Maybe I should have, but at the same time, Darvish has been as advertised (possibly even better), and it seems that Texas made the right call with him. We'll see how he performs tonight on baseball's biggest stage, in the AL Wild Card play-in game.

If you enjoyed this list, come back next week, as I'll publish the top-10 least valuable hitters and pitchers of 2012.

All statistics come courtesy of FanGraphs. All contract information comes from Cot's Contracts.