Is Craig Kimbrel's strikeout rate that big of a deal?

Craig Kimbrel's strikeout rate has been extraordinary this year, but how does his season compare to others when compared to the league?

Share All sharing options for: Is Craig Kimbrel's strikeout rate that big of a deal?

First off I would like to give a huge thanks to Justin for giving me this wonderful opportunity. I'm thrilled to be a member of Beyond The Box Score!

A few days ago, I posted about Craig Kimbrel's historic season. I got some good feedback, and James mentioned that he'd be interested in seeing a K%-lgK% statistic to see how much better Kimbrel (and others) are at striking out batters compared to league average.

Being the informed baseball and sabermetric fans that you are, I'm sure you're aware that strikeout rates have slowly been rising the past twenty years or so. That means there are going to be some pitchers that have astronomical strikeout rates compared to the historical average, or at least that was my assumption. 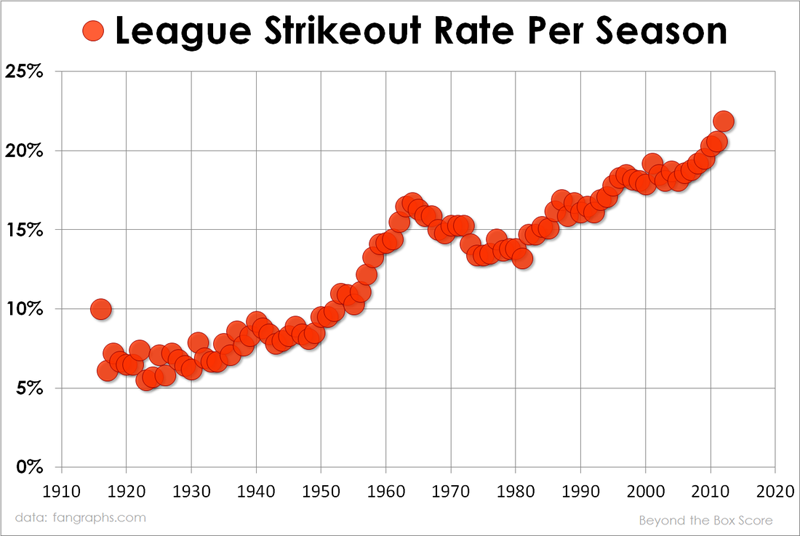 Kimbrel just happens to be going above and beyond that by striking out over half of the batters that he's faced. That's just not something you hear every day. But since strikeout rates continue to improve across the league, just how impressive is it?

Strikeout rates were as low as 16% in 1992, and in 2012 they reached almost 22%! Based on the difference between K% and lgK%, the gap between Craig Kimbrel and Eric Gagne is actually a lot closer than I thought. While a 6% difference in K% is big, the 2% difference we get when we subtract K% from lgK% is not.

Armando Benitez gets a jump in the rankings. When we looked at just K% he was eleventh overall, but when we look at the K%-lgK% we see that he rises all the way to sixth. Strikeout rates were pretty low in 1999, so seeing a strikeout percentage about 40% was definitely rare. The biggest drop appears to be Aroldis Chapman. While looking at just K% he was third overall, but after doing the calculations he dropped to seventh.

There could be many factors that attribute to this. Like James mentioned in the comment section of my first article, batters seem more willing to strikeout now more than ever. Kimbrel could also just be really really good, so while batters are more willing to strike out, it's also possible that Kimbrel's repertoire is just filthy. One thing is clear though: the gap between Kimbrel's 2012 season and Gagne's 2003 season may be a lot closer than we originally thought.

All stats are from FanGraphs.com and are current as of September 25th, 2012, so that they matched with the first part of this mini series.