Parsing the Demise of the Windmill: The Death of Aggressive Baserunning, Part 2

A deeper look at the evolving conservative habits of third-base coaches.

Share All sharing options for: Parsing the Demise of the Windmill: The Death of Aggressive Baserunning, Part 2

Last week we looked at the slow death of one of baseball's most beautiful scenes- the play at the plate. Baserunners and base coaches are clearly becoming more and more conservative as the game matures, and gone are the reckless and liberal baserunning days of the game's youth. Instead an older, wiser, more thoughtful philosophy has occupied the base paths in more recent seasons.

Beyond the Box Score's amazingly intelligent and wonderfully good-looking readership had a wealth of opinions on why exactly the game has evolved the way it has: slower baserunners, stronger arms in the outfield, higher run-environments, media criticism, injury-prevention, etc. And along with these excellent explanations, commenters also provided a number of suggested avenues of inquiry that may help to shed light on the subject. I'd like to use our time here this morning to address those suggestions. 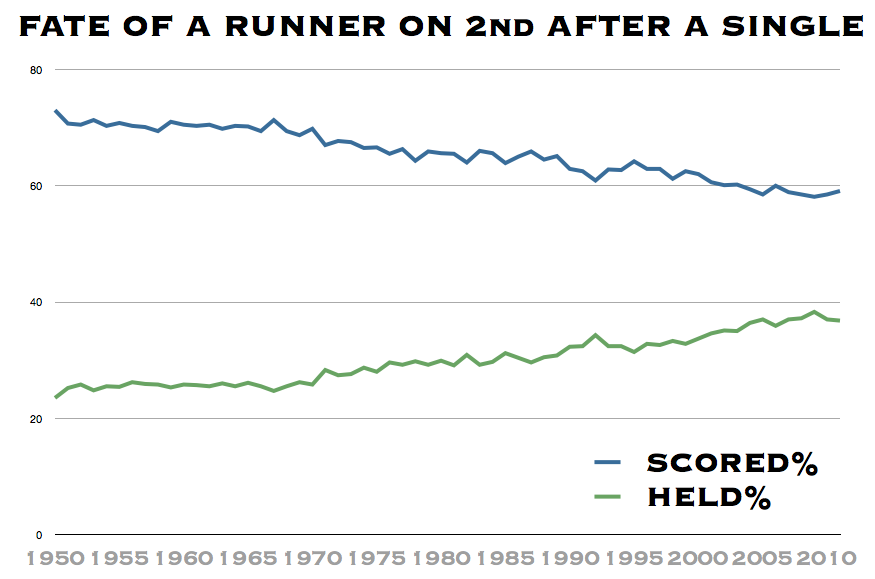 But what about the fate of these rising ranks of held runners? Are they ultimately left stranded or do they eventually score? Interestingly, the rate at which that held runner ultimately scored has slowly risen over the years, perhaps justifying the burgeoning conservative baserunning movement to some degree: 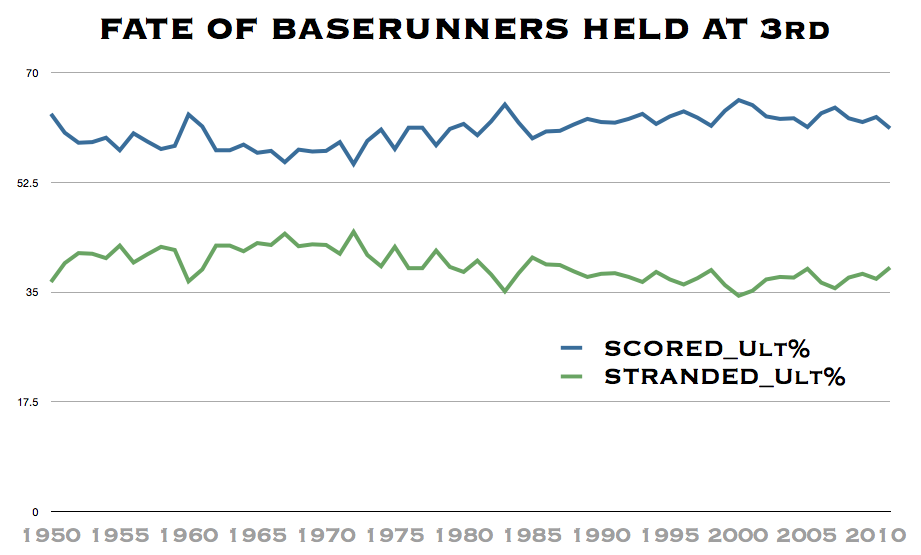 The trend seems to date back to the early '70's, which brings us to another reader request-- league splits. Has the incorporation of the DH into the American League in 1972 had any effect on the amount of runners waved home? Retrosheet says not really, at least not recently. But during those first few years of DH usage, the AL was decidedly more aggressive when rounding third, either related to the adoption of the DH rule or not: 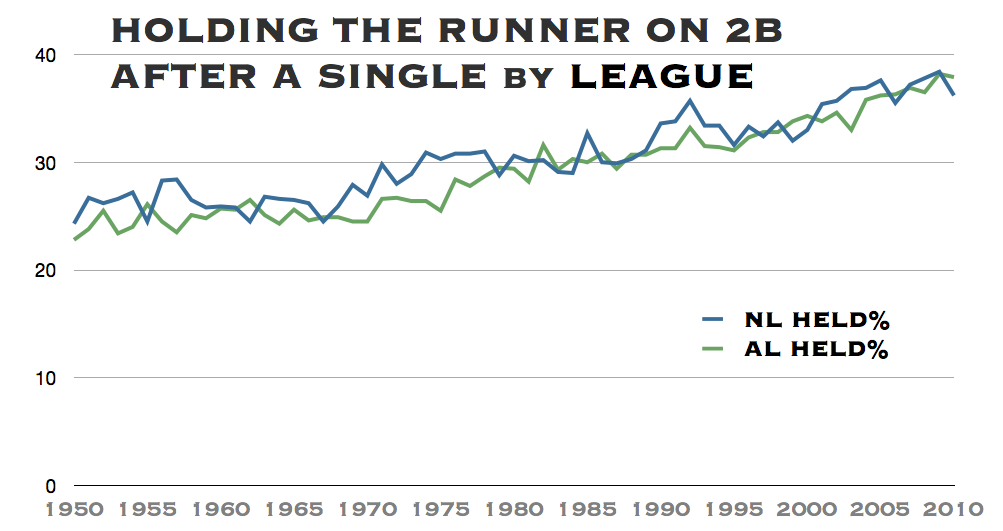 Of course all of this heavily depends on context. A base coach obviously makes his decisions according to certain in-game factors such as, score, inning and out-state. OGC suggested "maybe aggression is specifically less in certain parts of the game." This is something we can certainly take a look at: 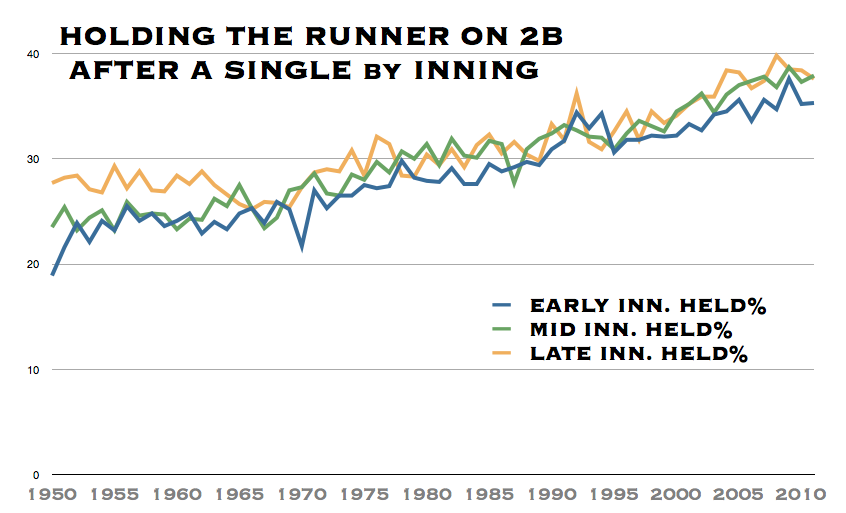 Naturally, base coaches are willing to take more chances in the early (1-3) innings, than they are later in the game (7-9). The stop sign was particularly popular late in the game during the '50's and 60's, but other than that, these trends have remained relatively steady over the past half-century. 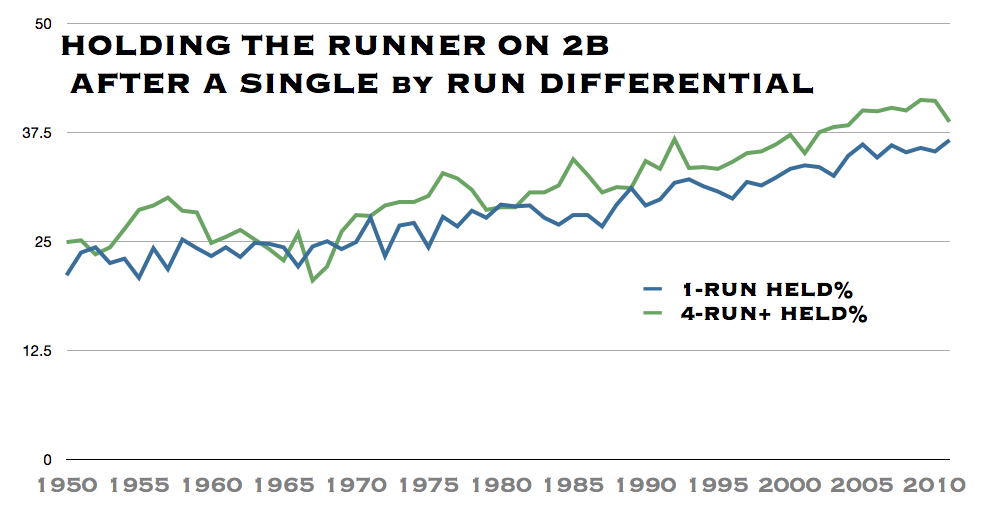 But the trend is bucked ever so slightly in the last five years when it comes to small leads versus small deficits. Teams that were down in close games typically played it safer that teams that were enjoying a small lead, but that hasn't necessarily always been the case in recent seasons: 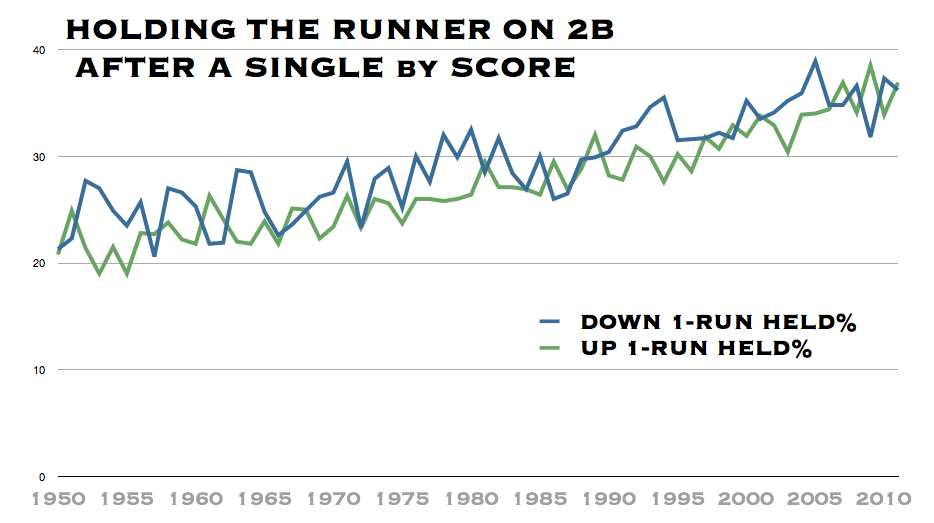 At the extremes, you can see coaches are clearly obeying the old code of not running yourself out of a game when the club is down by a significant margin. Teams losing in a blowout are much much more conservative with their baserunners than the club winning a the blowout: 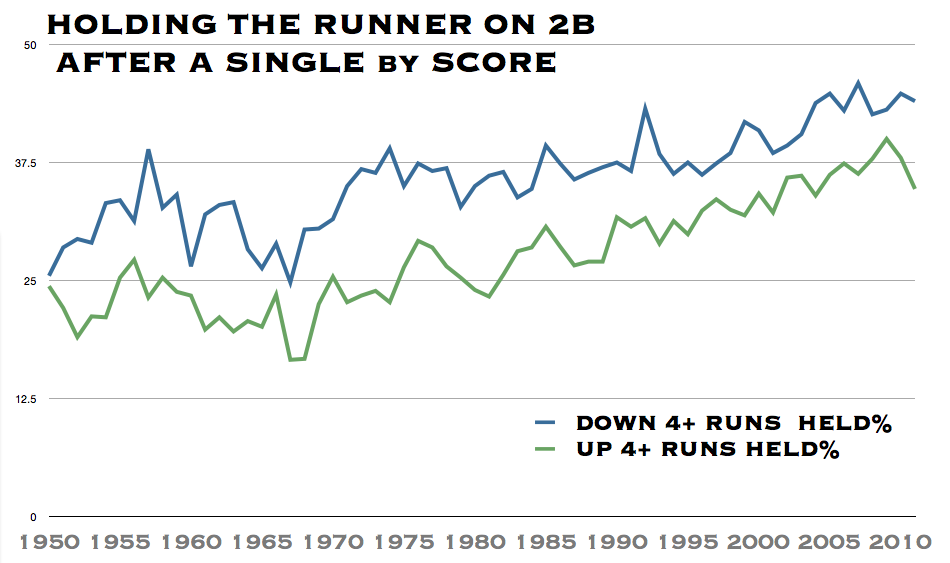 For further understanding of how the interaction each of these factors (out, inning, and score) affects HELD% in recent seasons, I've compiled a sortable table for your sorting pleasure using data from 2002-2011. So say your buddy asks you tomorrow, "Hey man, how often does the runner at 2nd score off of a single with 2 outs early in the game while down 1 run?"

FATE OF THE RUNNER AT 2nd AFTER A SINGLE

The lowest SCORED% in the table, incidentally, is down 1 run, 0 outs, late in the game. Teams are positively most conservative in these types of situations. Meanwhile, the lowest HELD% is down 4+ runs, with 2 outs early in the game. Clearly this is a situation where a team is just going for broke.

Conversely, the higher the HELD%, the lower the OUT at HOME% typically is. The lowest OUT at HOME% in the table is when a team is up 1 run, late in the game, with no outs. The HELD% in this position is an astonishing 61%. Obviously no one is going anywhere unless his safety is an absolute certainty.

But these baserunners are thrown out at the plate most often when they are trailing by 1 run, late in the game with 2 outs. This shouldn't necessarily surprise you-- time is very quickly running out and your team is in danger of losing. Time to fire up the windmill.

All data courtesy of the excellent people at retrosheet. Includes post-season, excludes 2012.