Throughout Jake Peavy's career he has struggled with his health. When he's healthy though he is one of the better pitchers in the game. Now that he has a new deal, let's review how we got here.

Ever since Jake Peavy's arrival in 2009, he's helped make the Chicago White Sox's rotation arguably the best in baseball. They've had the most fWAR in the majors, 71, and their FIP ranks in the top 10. Peavy's main problem is that he can not stay healthy. In 2010 he missed the second half of the season due to a detached latissimus dorsi muscle in his back.

During the 2011 season Peavy missed some time due to his injury a year before, but after that he was healthy. In 2012 Peavy was didn't suffer any major injuries, and was awarded with a 2 year-$29 million dollar contract at season's end.

One thing that makes Jake Peavy so successful is his ability to get a first pitch strike. During his time in Chicago, league average f-strike% has hovered around 58-59%. In Peavy's case he's been hovering around 62-63%. That puts him in the top ten in the American League from 2009-2012, and just out of the top twenty overall. 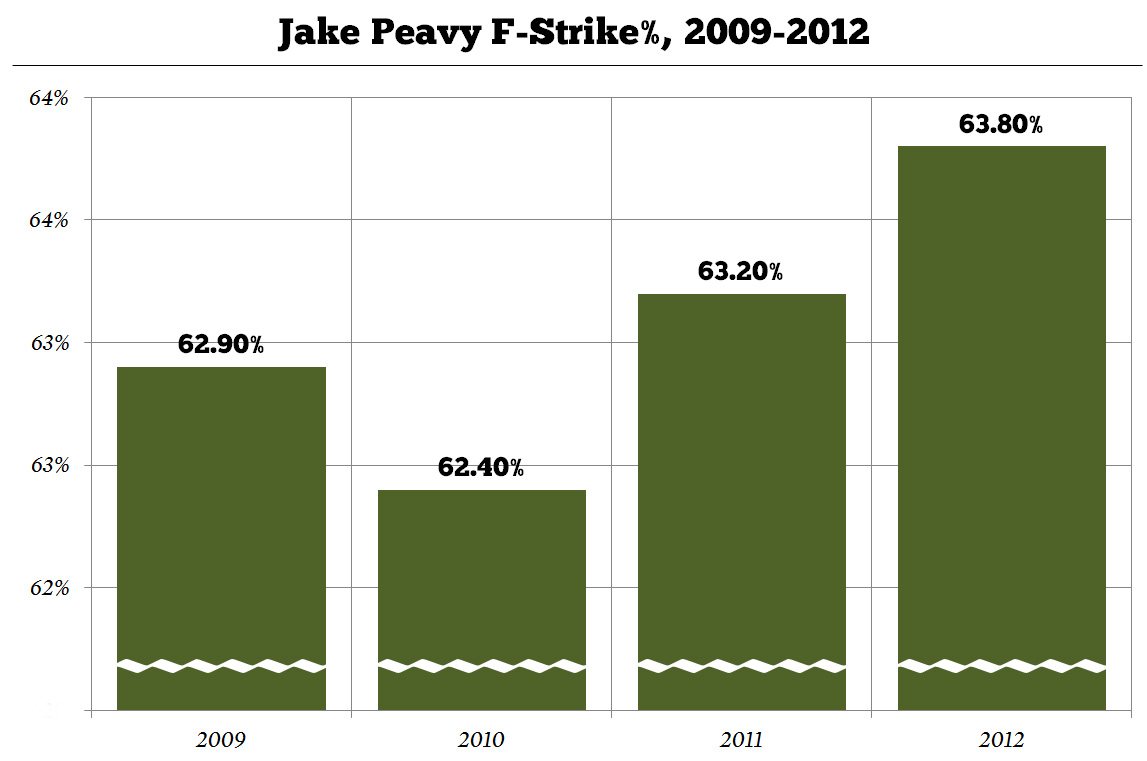 The last two seasons he's seen a slight uptick in his f-strike%, seeing a 1% increase from 2009. Now that might not be a big improvement, but it's better than seeing a decrease.

When it comes to swing and misses, Peavy has two pitches that stand out. They are his slider, and his cutter. Peavy's cutter generates whiffs on swings over 30% of the time. For some reason he only generated whiffs 18% of the time last year, but that could have been due to him recovering from his injury. This past season it bumped up past 30% again, so it appears Peavy's effectiveness returned. 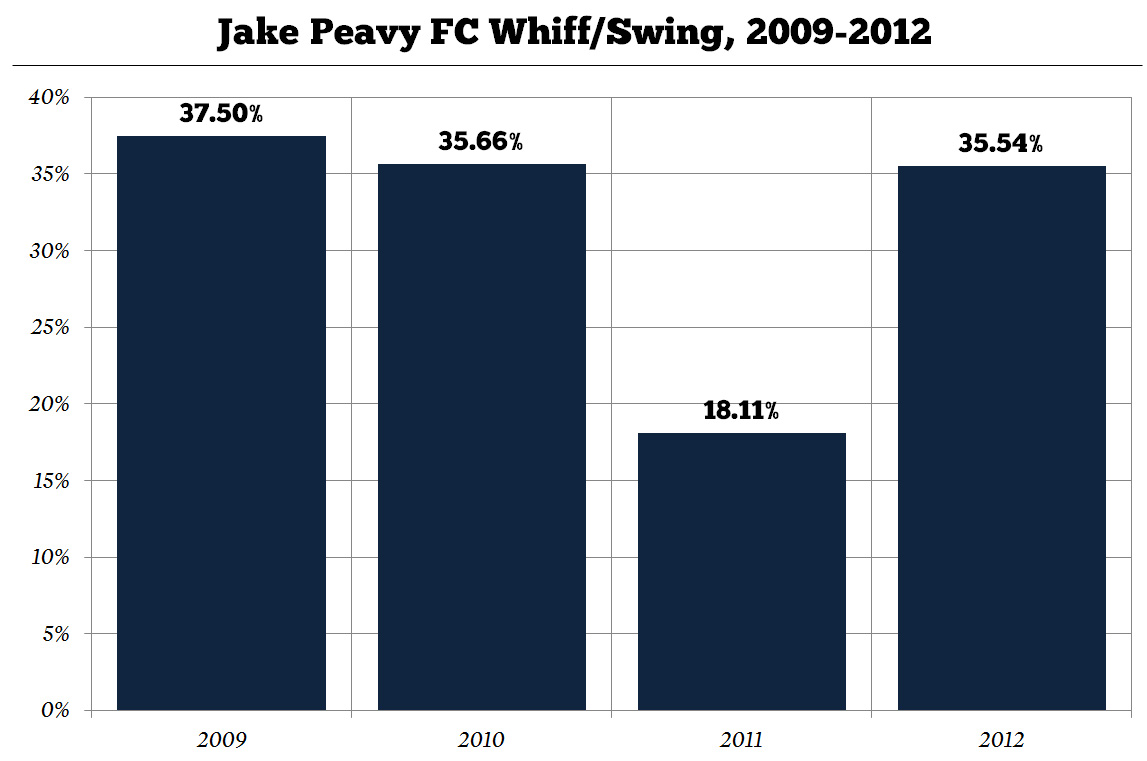 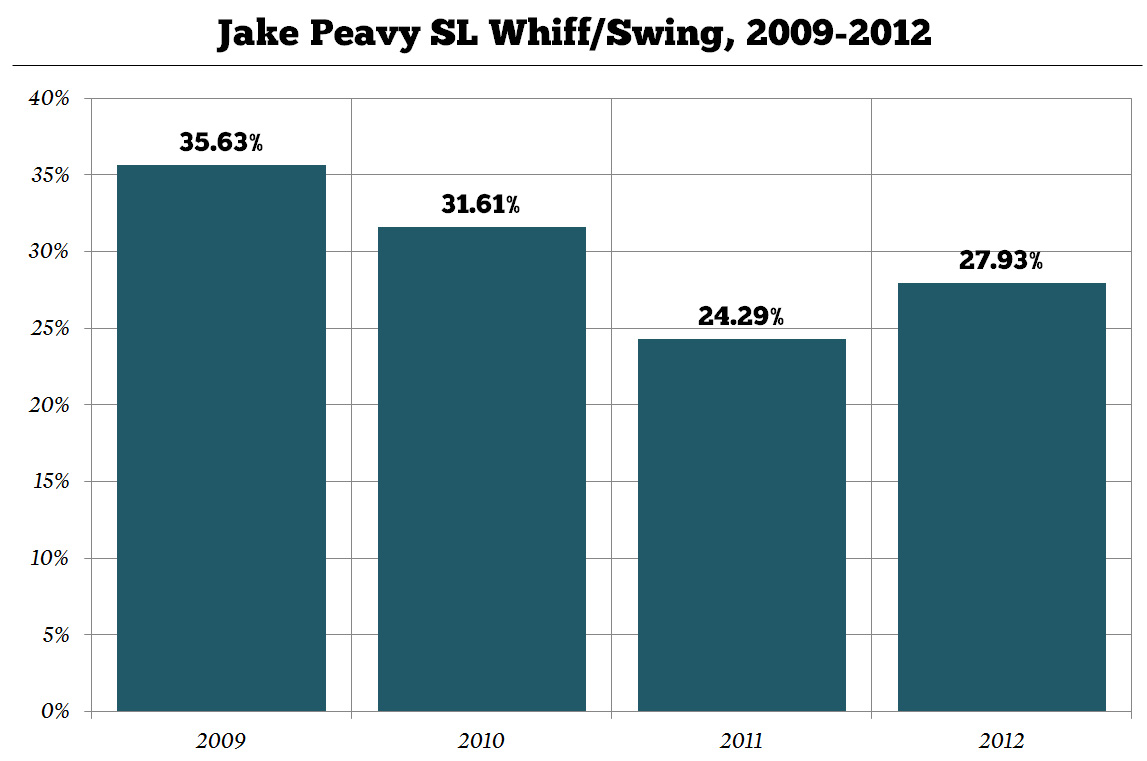 Peavy does a good job at generating whiffs, but he isn't a huge strikeout pitcher. In 2009 he struck out over 26% of batters, but since then he's hovered between 20-22%. He is able to limit walks though.

Even though he was able to generate whiffs, the results weren't there every year.

In 2011 Peavy's cutter was slightly below average, giving up -.59 runs per every 100 cutters thrown. This past season he saw that change though, as he saved .65 runs for every 100 cutters thrown. His slider on the other hand went from good the past few years, to poor this last year. Typically a pitch will range from +1.5 to -1.5 runs, so -.43 isn't terrible. Even though Peavy's fastball has lost about 1 MPH since his injury, it still remains an effective pitch. He had a little hiccup in 2010, but it appears to have returned to form.

In terms of overall value Peavy has been pretty solid when he's started. He's only generated 11.7 fWAR since 2009, but he also has never started a full season since 2012. Before that he averaged roughly 19 starts a season. 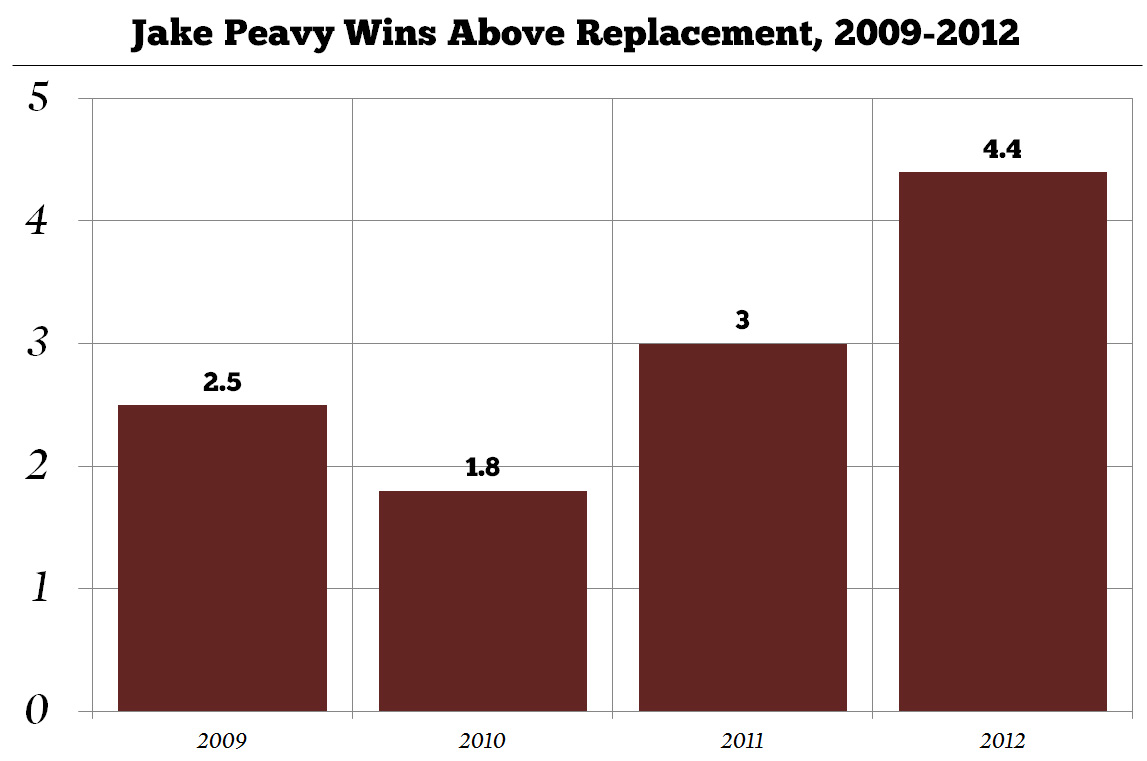 In 2011 he only made 18 starts, but still generated 3 WAR. That carried over to this past season where he started 32 games, and managed 4.4 WAR. Those aren't necessarily "ace" results, but I'm sure any team would take that nonetheless.

If Peavy can stay healthy he should be able to earn his contract. He's shown that he can be a good pitcher, but the second he gets hurt we could be looking at back at how disappointing it turned out.