In the fourth installment of Beyond the Box Score's 2012 awards, we offer our picks for the American League's best fielders at each position.

Two weeks ago, we kicked off our awards announcements by revealing our pick for MLB Executive of the Year, and last week we followed up with our Silver Slugger picks (AL, NL). This week, we turn our attention to the best fielders in baseball with our Gold Glove awards, starting with the American League (NL to come on Thursday). 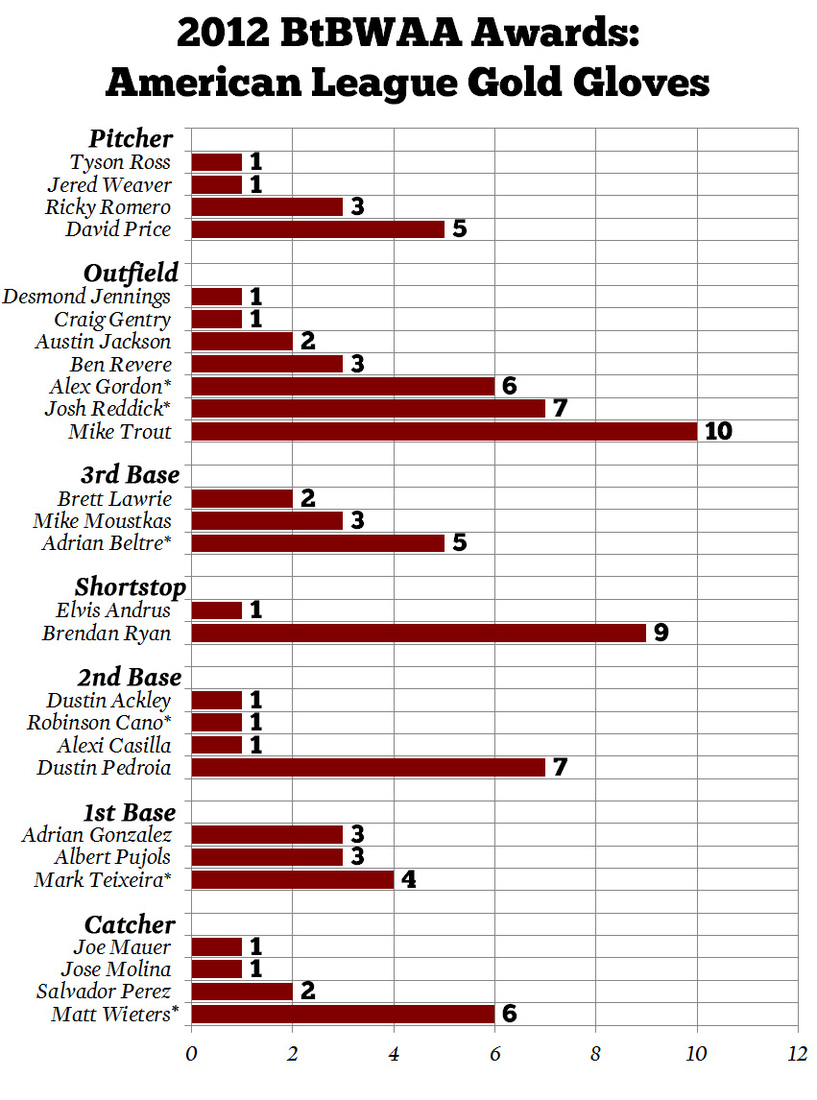 Let's start with the outfield (note that we used the pre-2011 Gold Gloves system, in which all three positions are grouped together). Mike Trout is our only unanimous Gold Glover winner in either league, just as (spoiler alert) he was for at least one other forthcoming award (okay, that probably wasn't much of a spoiler). Josh Reddick and Alex Gordon comprise the second tier and earn the other two honors, meaning we actually ended up with a player from each discrete position.

Going around the horn, Matt Wieters captures the Gold Glove behind the plate, with Salvador Perez as the only other candidate to earn multiple votes. Mark Teixeira barely edges out Adrian Gonzalez and Albert Pujols at first base in the closest race. Up the middle, Dustin Pedroia and Brendan Ryan coast to victory at second base and shortstop, respectively. Adrian Beltre beats out Mike Moustaka and Brett Lawrie at the hot corner, and David Price finishes ahead of Ricky Romero for the title of the AL's best-fielding pitching.

How did our vote compare with the official Rawlings-sponsored hardware? Well, we agreed with the real voters on Wieters, Teixeira, Beltre, Reddick, and Gordon, though we disagreed with their picks of Cano, J.J. Hardy, Adam Jones, and Jeremy Hellickson. Five-for-nine ain't bad for a group that gave Rafael Palmeiro the hardware in 1999 after he played only 28 games in the field.

What's fascinating to me is that our divergences were at the positions where we had the strongest consensuses. Pitcher wasn't exactly a blowout, but second base and shortstop were. But the worst was that Mike Trout—our only unanimous pick in either league—lost to Adam Jones, who didn't get a single vote from the BtBWAA. That's just whack.