Edwin Encarnacion smashed a career high 42 home runs in 2012. Will this lethal power continue next season? We take a look at five aspects of his power game in an effort to bring light to this question.

For Edwin Encarnacion, May 23rd, 2011 was one of the low points. On this fateful night, Encarnacion started at third base, and had just two fielding opportunities. One was a pop fly, that he handled. The other was a ground ball, that he did not handle. This marked his eighth error of the abbreviated season at the hot corner in just 16 games. From this point forward, the Jays made every attempt to avoid writing in the man so aptly referred to as E5 as the starting third baseman in their lineup. He made only 16 more appearances at third in the remainder of the season, five of which coming in the final days of the season.

With the emergence of Brett Lawrie as the team's everyday third baseman, Encarnacion was freed for good of the burden of manning the hot corner. Despite his lacking defense, Encarnacion has always had some offensive presence. Whether or not the lessened defensive responsibilities offered him more opportunity to focus on his work in the batter's box, something changed for Encarnacion in 2012.

As Dave Schoenfield pointed out at ESPN midway through his breakout season, Encarnacion made adjustments to his swing that gave him better plate coverage, helping to explain his success. He finished with a career best 42 home runs.

Questions always abound when a player suddenly destroys his career high in the home run department, especially with the publicity generated when doing so places him among the league leaders in this category. In an effort to understand how likely this power is to stay, we can compare Encarnacion's 2012 season to other 35+ home run seasons from recent years in a five different ways. We will use the sample of 47 such seasons between 2008 and 2012.

One way to compare such 35+ home run seasons is to examine the average length of all home runs hit during these seasons by these players. It would seem logical that hitters who on average knocked their home runs the farthest have flashed the most raw power and stand a better chance than others at repeating such home run prowess, all things being equal. 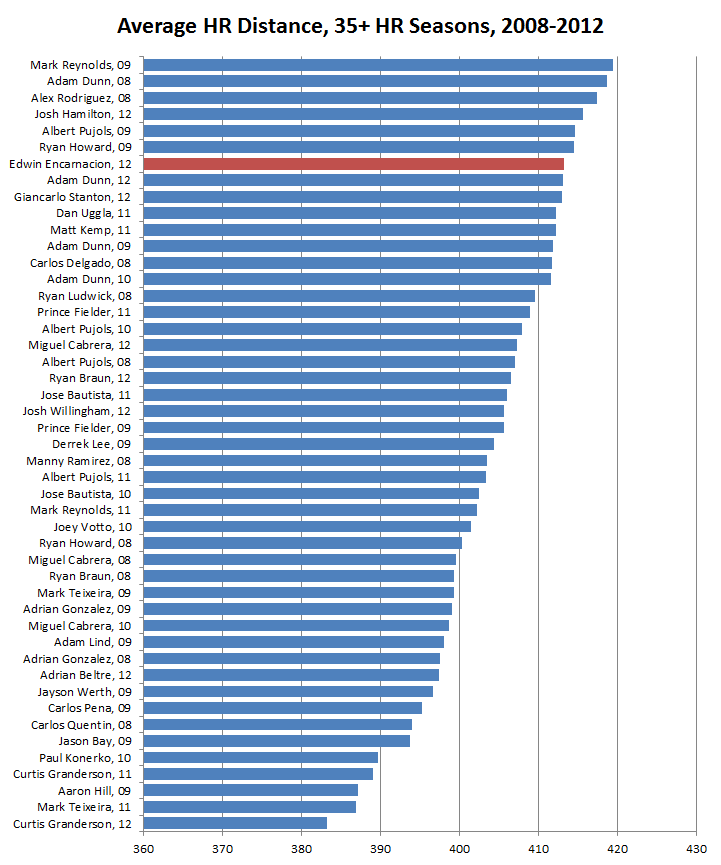 Encarnacion averaged a very respectable 413.2 feet on his home runs in 2012. This puts him in elite company, ranking seventh out of the 47 35+ home run seasons over the past five years, and placing second to Josh Hamilton of the 2012 qualifiers. Between the shorter swing giving him improved plate coverage and his robust home run distances, things look good at this point for Encarnacion.

We learned above that the average Edwin Encarnacion home run in 2012 traveled a great distance. If we expand our batted ball set to include not just home runs, but fly balls (hit at least 150 feet), it would reinforce our image of Encarnacion's power to see his name near the top of the leaderboard again. 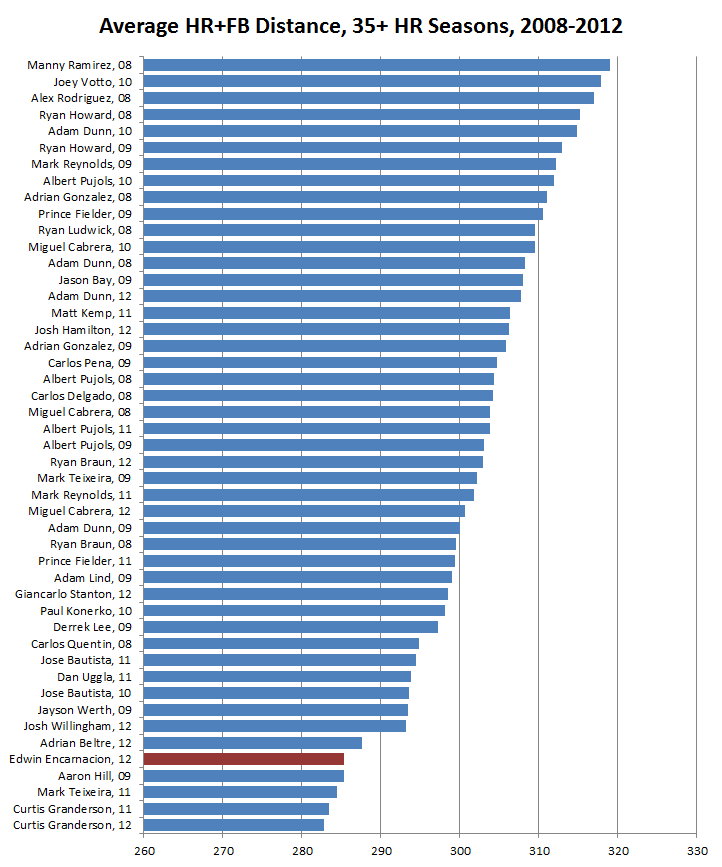 Surprisingly, Encarnacion posted a relatively poor average fly ball distance (including home runs) when compared with his powerful peers. Notice that the four players on the list who had shorter average home run plus fly ball distances also finished as the bottom four in average home run distance. It is interesting to note that the names at the bottom of the list all come from seasons played at Rogers Centre or Yankee Stadium. These two parks are not alone in the respect that many of the home stadiums for players on this list inflate home runs for the handedness of these hitters.

Certainly Yankee Stadium is an absolute haven for left-handed home run hitters, with park factors of 145 and 146 in the last two seasons. This of course helped buoy the home run totals of Teixeira and Granderson despite the relatively low average home run and fly ball distances. While Rogers Centre does its part to help right-handed hitters, the effect is muted compared to left-handed hitters in Yankee Stadium. The stadium played to a home run park factor between 110 and 121 for right-handed hitters since Hill's monster 2009 season, including a 118 in 2012. Nevertheless, the Jays' home park is beneficial and will assist in propping up home run totals over most other parks around the league.

While the Rogers Centre will help matters, adding this piece of perspective adds one piece of unsettling news to Encarnacion's power picture.

Obviously for a ball to clear the fence for a home run, it needs to be hit in the air. Hitting lots of ground balls is not the type of batted ball profile you would expect, nor want from a home run hitter. Seeing Encarnacion's name toward the top of the leaderboard in this metric would also be a good sign for future home run totals, all things being equal. 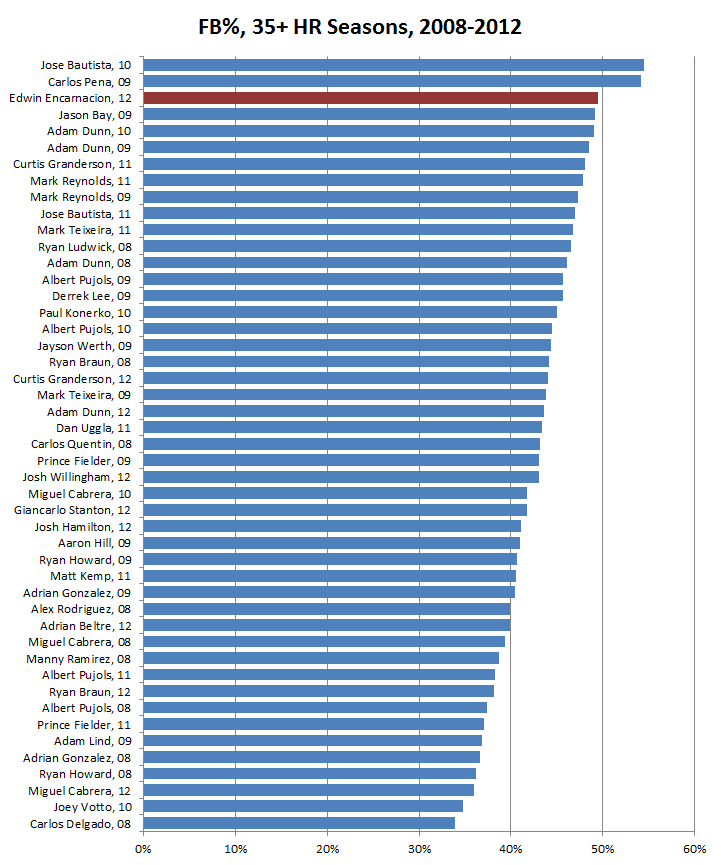 Another piece of good news! Encarnacion hits a lot of fly balls, even in comparison to these sluggers. More fly balls over the course of a season means less reliance on an elite HR/FB ratio to post high a high home run total. Hitting a high quantity of fly balls is a similar tact taken by former Jay Aaron Hill in his route to high home run totals in 2009 and again this season.

Hitting fly balls is certainly helpful for hitting home runs, although hitting infield fly balls is not going to get you anywhere. In comparing the rate at which these home run hitters pop the ball up in the infield, we would hope to see Encarnacion wasting few of his fly balls on this particular variety. 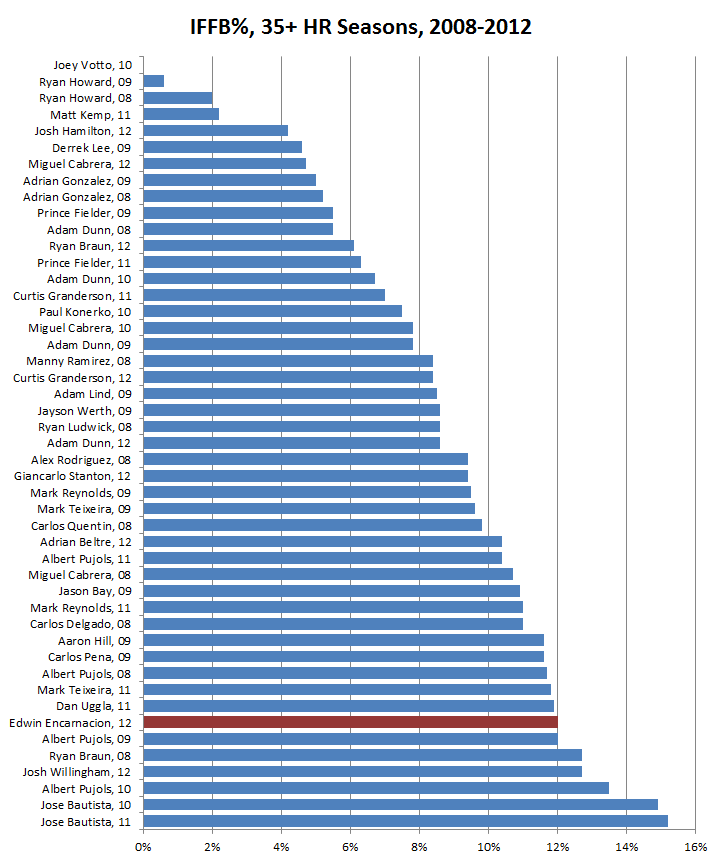 Hey, c'mon, Edwin! This is another indicator that is less than ideal, as Encarnacion popped the ball up at a higher rate than most others who managed 35+ home runs seasons recently. If you recall, the fly balls included in the home run plus fly ball average distance calculation had to be at least 150 feet, meaning they did not include infield fly balls. These two findings combined suggest that when Encarnacion hits the ball in the air, he either gets very little of it or gets all of it.

When making contact, fly balls are of course beneficial in generating home runs. While we know that Encarnacion hits a high percentage of his balls in play in the air, this advantage would be somewhat mitigated if he did not put the ball in play often enough. We can compare his strikeout percentage against his powerful brethren to complete this view of his power potential. 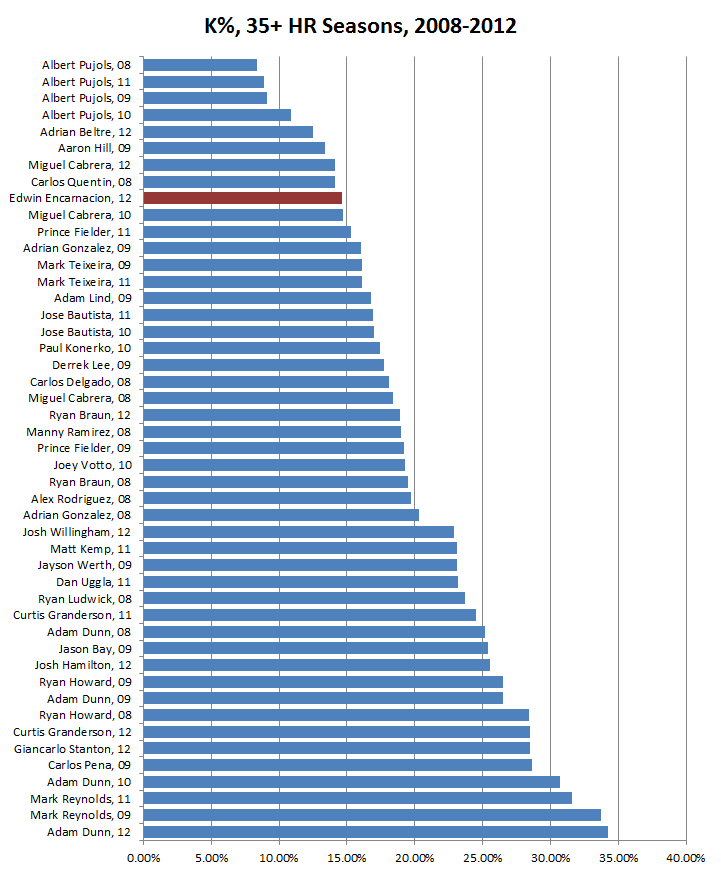 The strikeout picture is also positive, ending this roller-coaster of an analysis of Encarnacion. He is among the best of these sluggers at putting the ball in play, giving him more opportunities for his high fly ball percentage to be put to work and generate home runs. Encarnacion actually led the major leagues in fly balls (including home runs) with 161, putting him two ahead of Miguel Cabrera.

While there are signs pointing in both directions, from this assessment of Encarnacion's offensive capabilities there appears to be more supporting evidence than otherwise that his home run total was not a fluke. He put the ball in play more than the average home run hitter from recent years, and when he did he hit the ball in the air at a higher rate than most of his peers. While he did hit a higher than normal percentage of infield or otherwise weak fly balls, he does hit the ball farther than most when he does connect for a home run.

After inking Encarnacion to a 3-year, $29 million extension during the season, the Blue Jays must feel that his home run prowess is here to stay.

Credit and thanks to Baseball Heat Maps, ESPN Stats & Information Group, StatCorner and Fangraphs for data upon which this analysis is based.