Adam Dunn is likely to finish the season with a career Three True Outcomes ratio of 50%, making him the only qualified member of the 50% TTO Club.

Share All sharing options for: Adam Dunn and the 50% Three True Outcome Milestone

It is with great honor that I welcome Adam Dunn into his very own club. Adam Dunn is, depending on your cut-off criteria, the sole member of the 50% Three True Outcomes Club.

That is to say, as long as Adam Dunn doesn’t have five or more balls in play without an accompanying strikeout, walk, or home run, between October 2nd and 3rd, he will finish the season as the only qualified player in MLB history to have 50% of their career plate appearances end in one of the Three True Outcomes.

For some background on TTOs, you can check out a piece from August of 2000 from Rany Jazayerli at Baseball Prospectus that explains the Three True Outcomes in greater detail. As you probably already know, though, it can be summed up by saying that strikeouts, walks, and home runs are the only events that are solely pitcher against batter, without the impact of defense or luck. (Of course, a contrarian would say park factors and weather can have an impact, but contrarians are jerks.) As such, they are the truest outcomes of the pitcher-hitter battle.

There is not necessarily any value in being a TTO type of hitter, it’s more just an interesting statistical profile to examine. In a recent piece on FIP, James Gentile looked at TTO trends on a league-wide basis over time, and the trend is useful for the historical context we’re going to look at below -- TTOs have risen at a relatively steady rate over the course of MLB history, so it shouldn’t be much of a surprise that we’ve seen far more TTO batter profiles as time has gone on.

Beyond James’s work, Bill Petti of Fangraphs also looked at historical TTO data, particularly highlighting the historical trends in K%, BB% and HR%, as well as the all-time Goliaths of TTO. While Bill’s work looks at individual seasons of 45% or 50% of plate appearances ending in a true outcome, I wanted to look at career numbers to highlight Dunn’s career mark in proper context.

To be fair, as well, as I was refreshing myself on previous TTO research I came across this piece from Matt Klaassen at Getting Blanked where he looked at Dunn’s TTO dominance back in July.

Method
Building on what Bill and Matt had highlighted, I exported a Fangraphs custom table showing TTO information for any player with at least 2500 career plate appearances. I then summed their strikeouts, walks and home runs, and divided by plate appearances to get a TTO%. Bill and Matt had used slightly different methodology, with Matt leaving out intentional walks and including times hit by a pitch, and Bill just excluding intentional walks. I left out hit by a pitch but kept intentional walks in the equation, with my logic being that I wanted to look at the outcomes regardless of how they were achieved. Of course, had I eliminated intentional walks, Dunn misses the 50% plateau that I’m so excited about, so consider it a lucky coincidence that I just decided to use the basic (HR+K+BB)/PA formula.

Below you can see the spread of career TTO percentages for all qualified players, illustrating just how much these men are outliers historically. 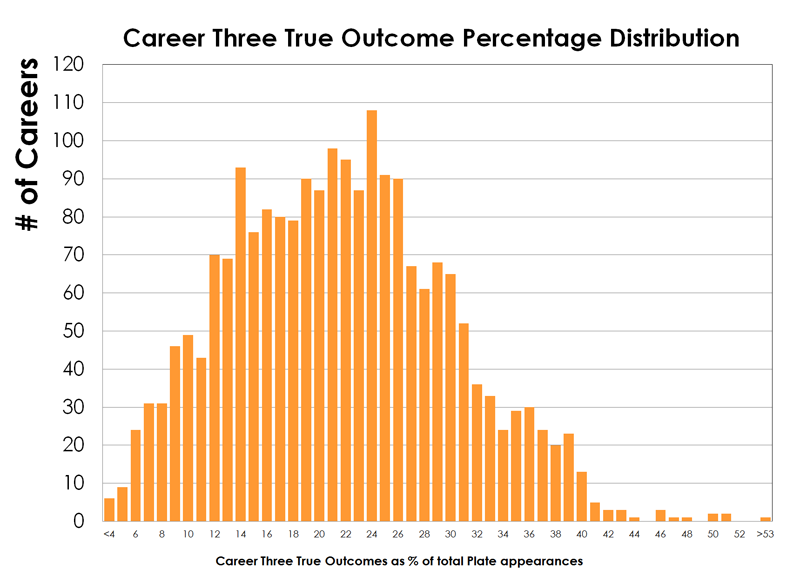 So Dunn is not the king, per se, since notorious TTO enthusiasts Cust and Branyan take the top two spots. However, it had been suggested to me that five seasons of 500 plate appearances was a better criteria as it "weeds out the stragglers and hangers-on while still catching some of the more inspired but short-lived careers," (thanks, Editor). While I’d argue that Cust and Branyan are interesting cases -- Cust because of his all-time extremist approach to batting and Branyan for his ability to hang around for 14 seasons but only hit 500 plate appearances once -- if we alter our criteria to further filter down the player pool, our leaders become:

Dunn now becomes the king of TTO batters with appreciable longevity, although Thome’s 10,306 career plate appearances give him the highest sum of true outcomes of all time, with 4,903 combined strikeouts, walks and home runs.

Of course, Dunn is not guaranteed to maintain this 50% mark for the rest of his career. It might be a temporary mark of pseudo-greatness, but it’s a neat milestone nonetheless. Out of curiosity, I also pulled the highest single season TTO percentages of all time, using a 450 plate appearance cut off. The all-time highest TTO% in a single season are:

Below you can see the trends for TTO% since 1990, roughly the beginning of the "FIP Era" where TTO rates enter their modern levels. 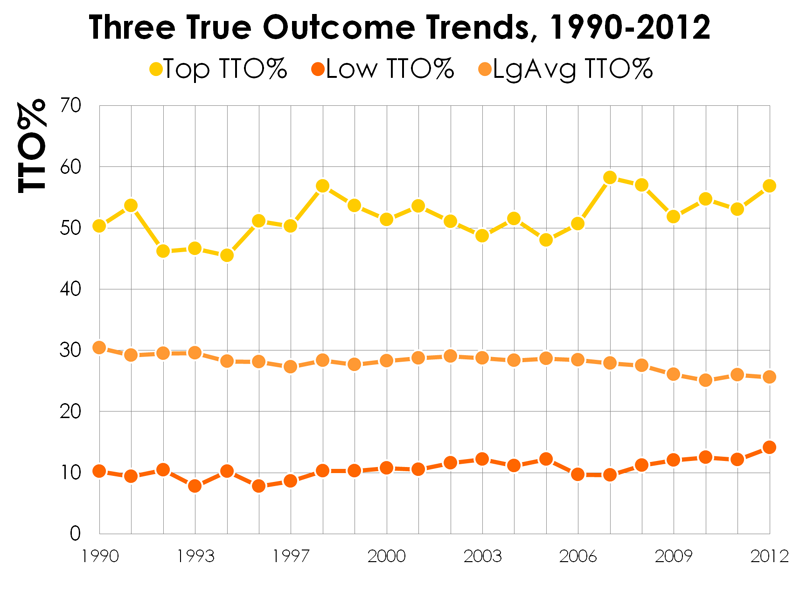 And again, these league-wide rates are slightly different than the pieces I linked to due to the small accounting differences at play. In the future, I’m hoping to compare TTO with some other data to find any interesting trends, but for now here are a couple of nuggets I found interesting when looking through the data:

*With some exceptions, TTO guys tend not to pack a ton of value in terms of fWAR. Perhaps this is because players who fit the TTO mould are generally sluggers, who we also tend to associate with poor defense. It’s also possible that large TTO ratios require a certain set of underlying skills to be successful, explaining why Cust’s career was so short, Branyan never stuck as an everyday player, and Dunn had a disastrous 2011.

*While batted ball data is only available as far back as 2002 in most cases, it was not surprising to see that just about every player among the leaders hits at least a league-average amount of fly balls. With the league average hovering around 36% for the past decade, the average FB% for the top-100 TTO% players with batted ball data available was 40.5%.

*That same group, unsurprisingly, also had an average HR/FB rate of 15.48%, well above the approximate 10% league average.