Is Francisco Liriano Worth a Gamble?

Ever since Francisco Liriano got Tommy John surgery he has not been the same. Going into the off-season is he someone that teams should gamble on?

Share All sharing options for: Is Francisco Liriano Worth a Gamble?

If you're a Twins fan (like myself) then you undoubtedly know how frustrating Francisco Liriano can be.

When Liriano debuted in 2006 he became the Twins second ace, next to the incumbent, Johan Santana. Liriano's slider was one of the best pitches in the game, and the results showed that. At seasons' end he had a 30.4 K% to go along with a 6.8 BB%. His 2.55 FIP was the best in the American League, and second behind league leader Ben Sheet's 2.43 FIP. His FIP- was an impressive 58.

Unfortunately, Liriano tore his UCL, and on November 6, 2006 Francisco Liriano went under the knife.

Since then he has never been the same pitcher.

In 2008 Liriano was able to make just 14 starts for the Twins. While the results weren't bad, they weren't as good as 2006. He saw a 10% drop in his strikeout percentage coupled with a 3% rise in his walk percentage. His groundball percentage also fell by over 10%.

That trend would continue in the next season, but in 2010 something changed.

His strikeout percentage did not reach his 2006 level ( 24%) but was still a good number. His walk percentage also fell, but, again, was not as low as his rookie year. As a result, Liriano boasted a well above-average FIP- of 64.

One of Liriano's main struggles over the past few years has been getting ahead in the count: 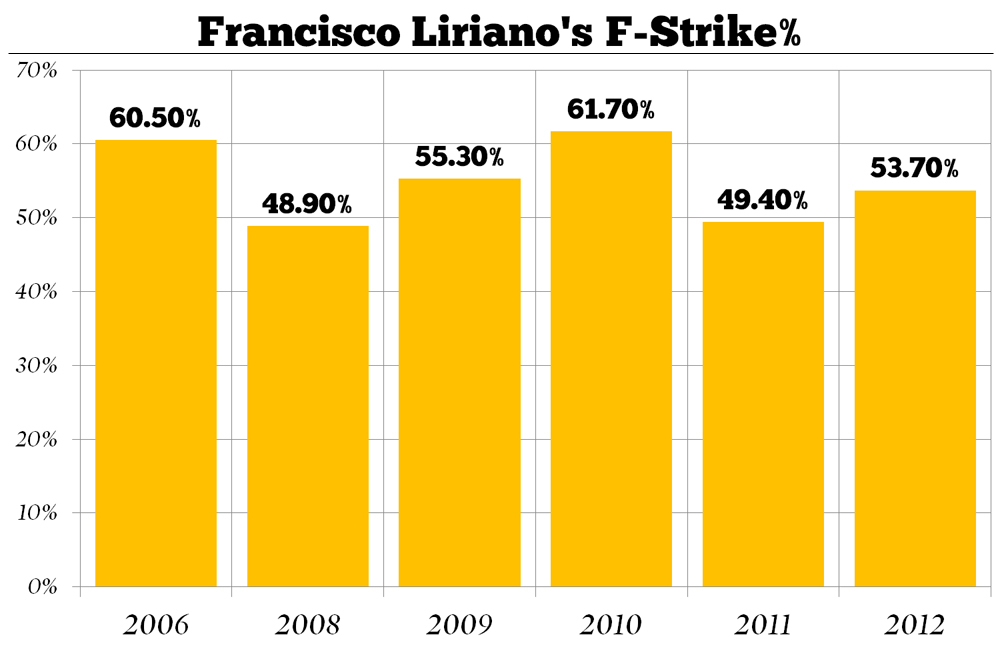 During his rookie season Liriano had a 60% f-strike%. That's right around league average, not overly impressive.

The next few seasons it began to decline, falling as far as 48% during his first season back from Tommy John surgery. In 2010 it rose above league average again, but then started a steady fall. Getting ahead in the count (throwing a first pitch strike) makes a pitchers job much easier.

One of the most interesting things about 2010 was Liriano's fastball velocity.

During the 2010 winter league season, Liriano for Leones del Escogido. He helped them reach the postseason, and in the postseason he went 3-1 with a 0.49 ERA in seven starts. He struck out 37, and walked only 5 as he helped lead his team to the championship. In 2012, he pitched 25 innings of winter ball and was less successful, with 25 strikeouts and 16 walks, despite the increase in his fastball's velocity.

As I'm sure most of you know, Liriano's slider is one of his most important pitches. In order to be effective though he needs his fastball to be working: 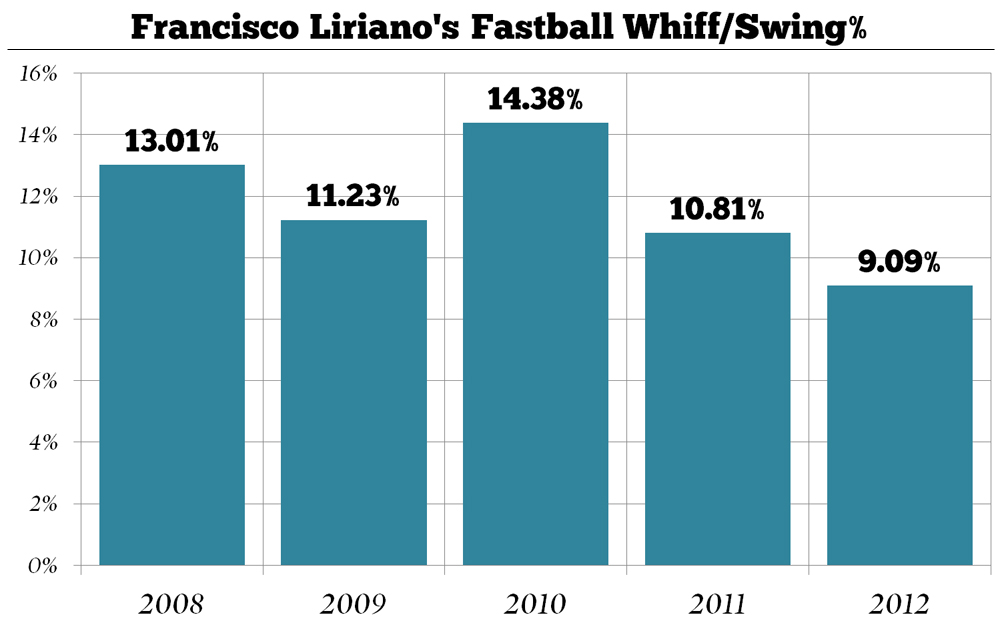 His fastball was the least effective this past season, in terms of whiff per swing percentage; batters only whiffed 9% of the time.

In 2010, when he had a bounce back season, batters whiffed over 14% of the time. His slider seems to always gets whiffs at a clip of over 40% of the time, but that doesn't mean much if his fastball isn't on.

Liriano is still a intriguing pitcher because so far he's always done worse than his peripherals. Here is his ERA, FIP, and ERA-FIP since 2006.

Besides 2006, his ERA was never better than his peripherals suggested. Just this past year alone he was a full run worse than his FIP showed. It's possible that park factors could be a contributing factor, or some other outside factor, but his 2010 FIP makes me think that Liriano could still be effective.

Liriano could be a good project for a team in need of a fourth or fifth starter, he's only 28 years old and I don't think it's time to lose hope just yet. One person even mentioned to me that the Twins should look at bringing him back. It can't hurt, their rotation was bad enough in 2012.

Whoever signs him will have to be patient though, but there's a chance they might just be rewarded with a 2010-esque Frankie.