A battle of wits: The Profar-d'Arnaud trade talks, simulated

Share All sharing options for: A battle of wits: The Profar-d'Arnaud trade talks, simulated

With recent unfounded rumors of a Jurickson Profar- Travis d'Arnaud swap, Blake and I decided to go head-to-head and see if there was a deal we could reach that was realistic. I played the role of Jon Daniels (JD), while Blake was Alex Anthopoulos (AA).
Obviously we don't have time to really scout the other team's minor leagues or do real in-depth analysis on the players, so if the trade ended up lopsided in either direction please excuse that person (Blake) for getting schooled by an incredibly handsome fellow (Spencer). We both really grew to appreciate how much goes into the GM's job by doing this exercise.
It would only be fair to mention that at the end of this negotiation, Blake had to finish up to go to an exam, meaning he had some added pressure in terms of the time constraint. I think at the end of the day that we came to a fair agreement.

AA: So, Jon ... I've read on the Twitter Machine that we've allegedly discussed trading Jurickson Profar for Travis d'Arnaud. I have no recollection of this, but I've been admittedly distracted by the knife my manager placed in my back.

JD: Well Alex, if it makes you feel any better I've been distracted by the knife my manager has placed in my last three season’s backs. Now, I assume you spelled Juremi wrong, am I correct?

AA: No, no. I need infield help, but not that bad. Now I think we have our long-term solution at SS in Adeiny Hechevarria, but your depth at the middle infield intrigues me ...

JD: Well Alex, we need catchers and all, but Jurickson Profar is the #1 prospect in baseball. He even homered in his first at-bat, and got a two-out base hit to keep our season alive in the Wild Card Game. d'Arnaud is a great prospect and all, and we certainly need a catcher, but that's a steep price. Why not throw in Hechavarria and your next two managers and we have a deal.

AA: Didn't we just give you a five-win catcher for Frank Francisco? Frank Mother**** Francisco? Now look ... injuries or no injuries, d'Arnaud is a stud. Have you seen those AAA numbers ... and our AAA team is in BUFFALO no less! 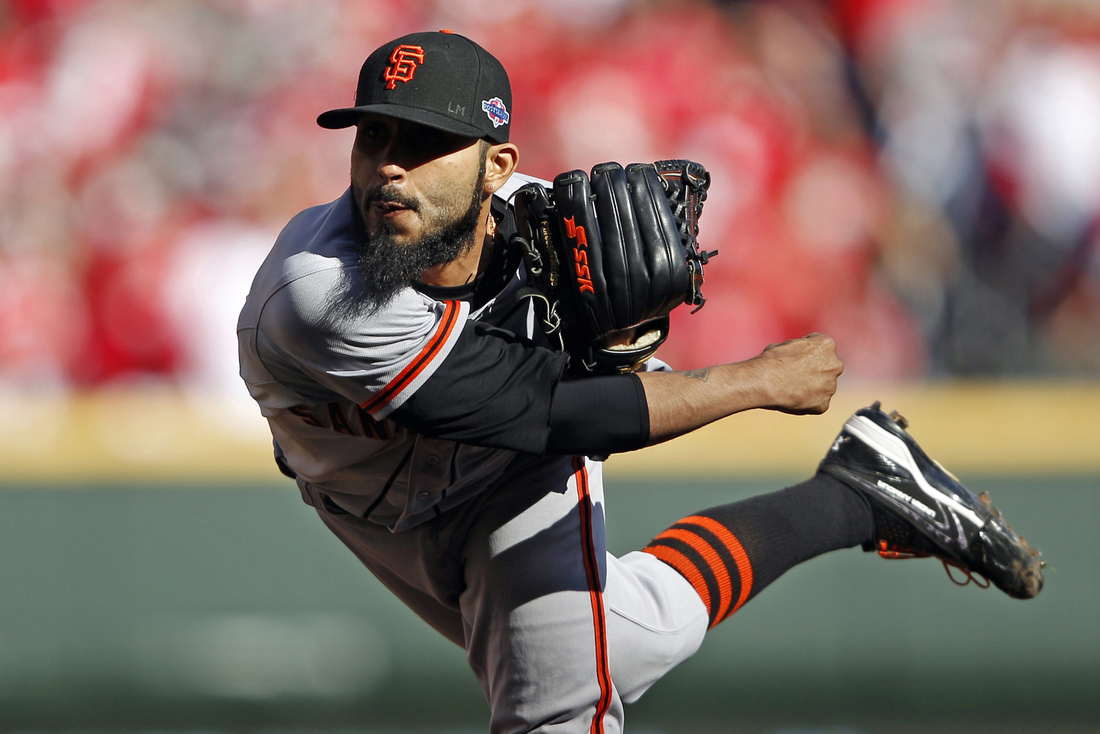 You can't be serious!

JD: You did say you guys weren't chicken, no? Hey! Now wait a second, I'm not a gambling man, but you guys were in Vegas last year! That park makes Yankee Stadium look like the Polo Grounds. Don't tell Sandy that he's in for a rude awakening when Jefry Marte bats .360 next year and he starts seeing TRAID WRONGZ columns from Joel Sherman.

AA: I do have a catcher that might interest you. J.P. Arencibia has five homers in eight career games at your ballpark ... Rogers Centre has a rep for inflating righty power numbers but Arlington is even more extreme...the kid could belt 30+ for you guys no problem. Small sample size with the five HR in eight games there, but Arencibia has established himself as a power hitting catcher with serviceable game managing skills and improving defense. He fits your park and lineup well....Napoli power at 1/9 the price (he made less than $500k last year and has just two years service time).

JD: We have some concern about his career 13.2% SwStr rates, two percentage points higher than Napoli's. 1.3 WAR is nice, but what would you like in return?

AA: Yes, the SwStr% is admittedly of some concern. I should note that undervalued in his WAR is some improved defense that goes undetected by defensive catching metrics. Dare I say he's now league average. I guess the big question in terms of return is what your plans are with your middle infield. I can't afford to take Kinsler off your hands, but if Andrus is going to be bumped out of town by Profar, I could certainly make room for his two-year, $11.7 million.

JD: Well Elvis is a player we value highly, it'll take more than Arencibia to take him off our hands. We need a power-hitting corner outfielder who is under contract though

AA: Oh absolutely more than J.P. In terms of corner outfielders, Adam Lind can't really play RF but can play an okay LF/DH. If you were looking on the younger or more controllable side, Moises Sierra has actually been called a young Nelson Cruz ... 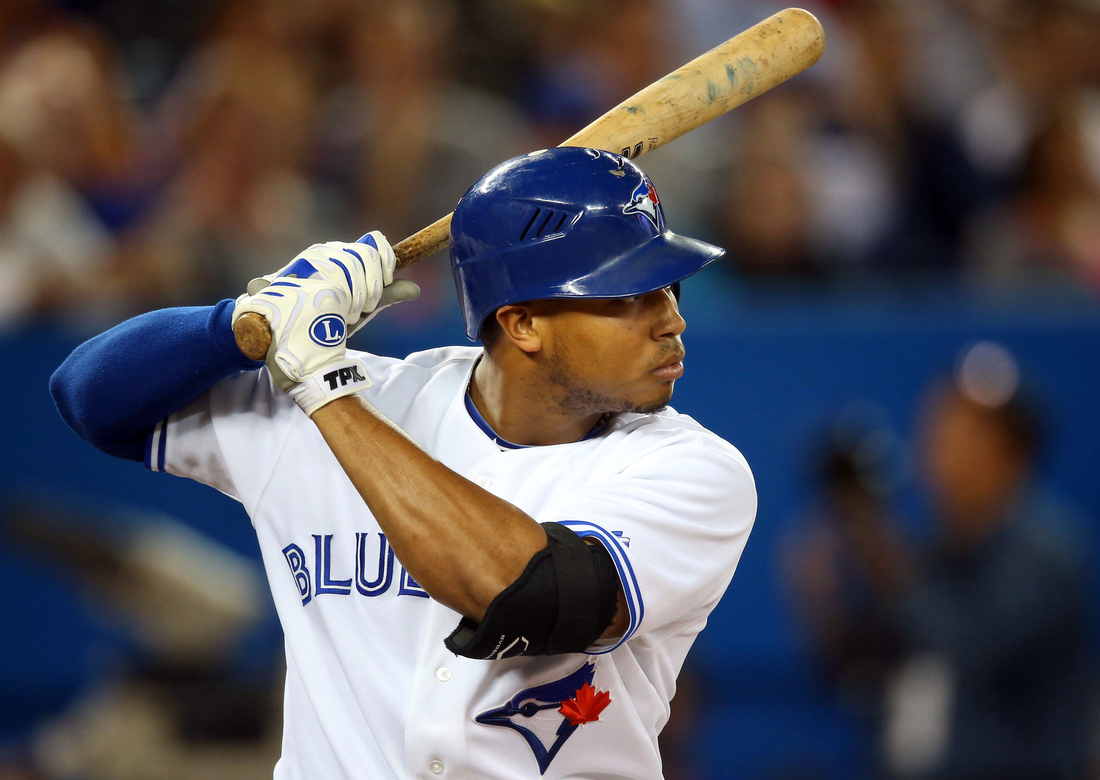 JD: Alex, Moises is a fine prospect, but we're looking for guys who can help us now. Besides -- we have unproven guys on the farm we could call up if we wanted to go that route.

AA: That's fair. I don't have much in terms of power hitting OF not named Jose Bautista though.

JD: What would he cost us? How about a few high-K middle relievers (I'm told you have an affinity for them lately)?

AA: More than you can afford. We think with a few additions we can challenge for a Wild Card spot this year, and I can't risk alienating our fanbase by hitting the reset button once again.

JD: I understand. What kind of money can you add this offseason?

AA: Well I've had Kelly Johnson and a few relievers come off the books, plus the support of management with a flexible budget, so I can definitely add, though my focus will be on the SP market. For example, a Kinsler would probably be too prohibitive.

JD: If only you guys had a stud like Yu Darvish ...

AA: With 6 starters in house, are you guys ready to move on from the Dutch Oven? Some big salaries on the horizon for a 1.5-win pitcher.

JD: We like Holland. He could be moved for the right price though.

AA: Is Arencibia the right price-ish?

JD: We want Marisnick and an arm as well. 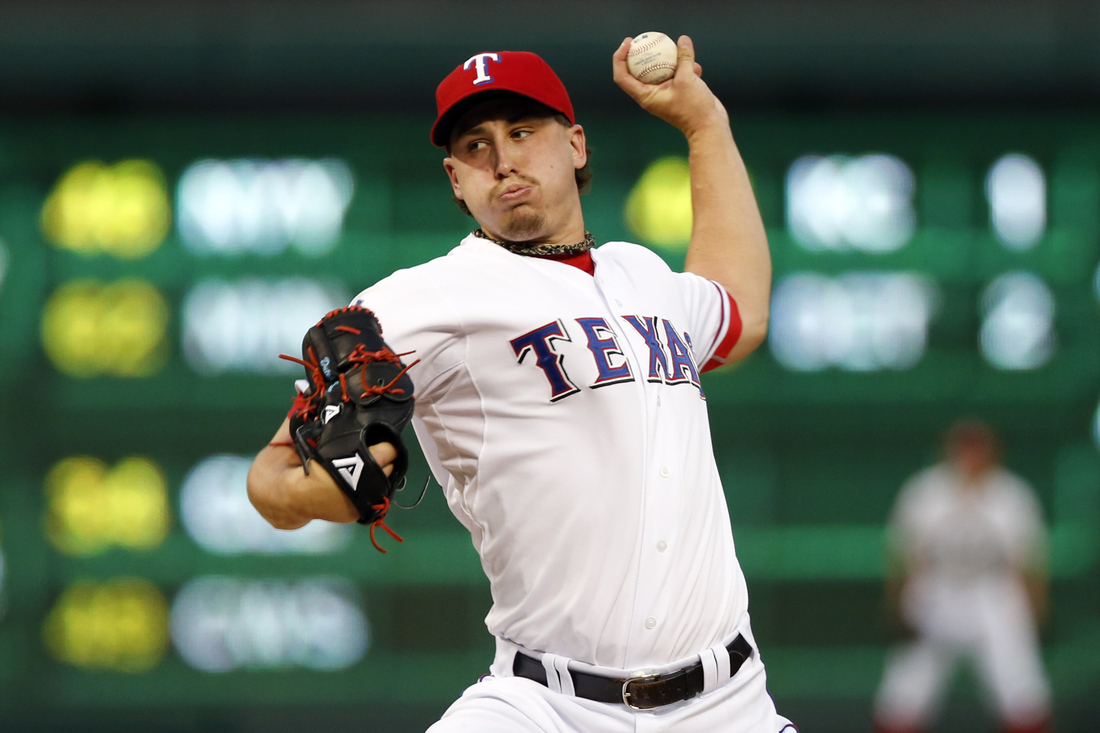 Yeah I'm not sure this is gonna work out.

AA: Holy hell. You realize Marisnick is my #2 prospect, right? Jon, I'm looking at the list of available catchers for this offseason, and it looks like unless you want to re-up Napoli and commit to playing him behind the plate (as he's allegedly requested), you don't have a ton of options. I think we have something with an Arencibia+___ for Holland framework.

JD: I need another piece of value for Holland. He's not only a good pitcher, but a positive influence in the clubhouse. We also don't know what to expect from Neftali coming off surgery. What do you guys think of Ogando? Think he can start?

AA: It's possible, though he'd obviously be on an innings limit after dropping from 169 to 66 IP this year. I'll have to look back at some of the reasoning for him moving to the pen in the first place. What's the type of "extra piece" we're looking at in a JP/Dutch swap ... and don't say Marisnick or so help me Youppi ...

JD: How about you guys throw in one of your pitching prospects, and a sixth starter type? Happ perhaps?

AA: I could do that ... Happ could slide in nicely as a swingman for you.

JD: Which pitchers would you guys feel comfortable with giving up?

AA: In the Happ mold, we could move a Laffey or Cecil (swing men/LOOGY options). If you wanted to take on more of an unknown, Chad Jenkins also looked decent down the stretch as a swingman for us. Well Jon, it definitely seems like we've got a framework here for an Arencibia + a sixth starter type for Holland. Let's go back and have a look at our respective systems, and touch base again tomorrow? It'll give you a chance to talk with your scouts about J.P., too. 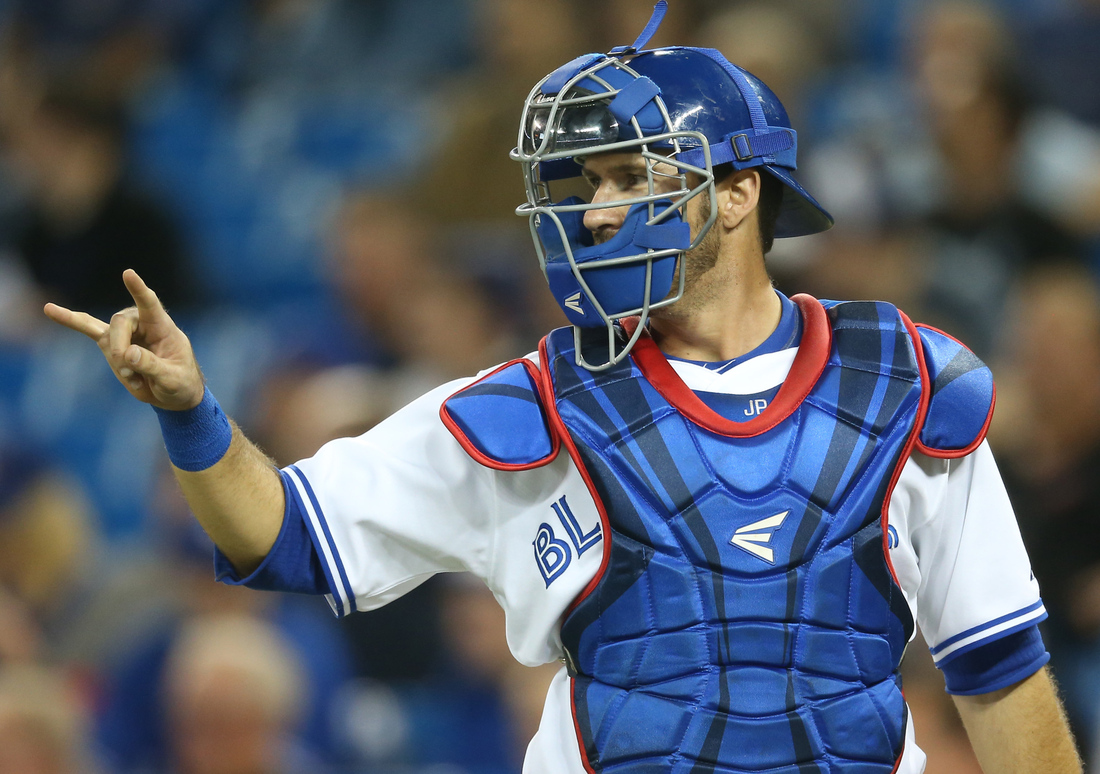 JD: I want to get this deal done tonight; we have a lot to do this offseason. Forget the swingman if you give us a good prospect from that group of Osuna / Nicolino / Norris / Syndergaard / Sanchez.

AA: Five names from my top 10 prospects ... What about Deck McGuire? He was our 12th-ranked pitcher. Struggled a bit this year, but the upside is obvious.

JD: Holland is 26-year-old lefty with a career xFIP of 4.06, he's a valuable asset to us. We see that group as relatively interchangeable, pick the one you guys like the least.

AA: Syndergaard would be the one we'd move. Syndergaard and Arencibia for Holland and 2B prospect Leury Garcia. As a second baseman, he's blocked for you guys and is a lot more valuable to us than you.

JD: Throw in Happ and it's a deal.

BtBers, who won the trade?