In the third installment of Beyond the Box Score's 2012 awards, we offer our picks for the National League's best hitters at each position.

Last week, we kicked off our awards announcements by revealing our pick for MLB Executive of the Year. This week, the series continues with the Silver Slugger awards. We started with the American League on Tuesday, so now we turn our attention to the best hitters in the Senior Circuit. 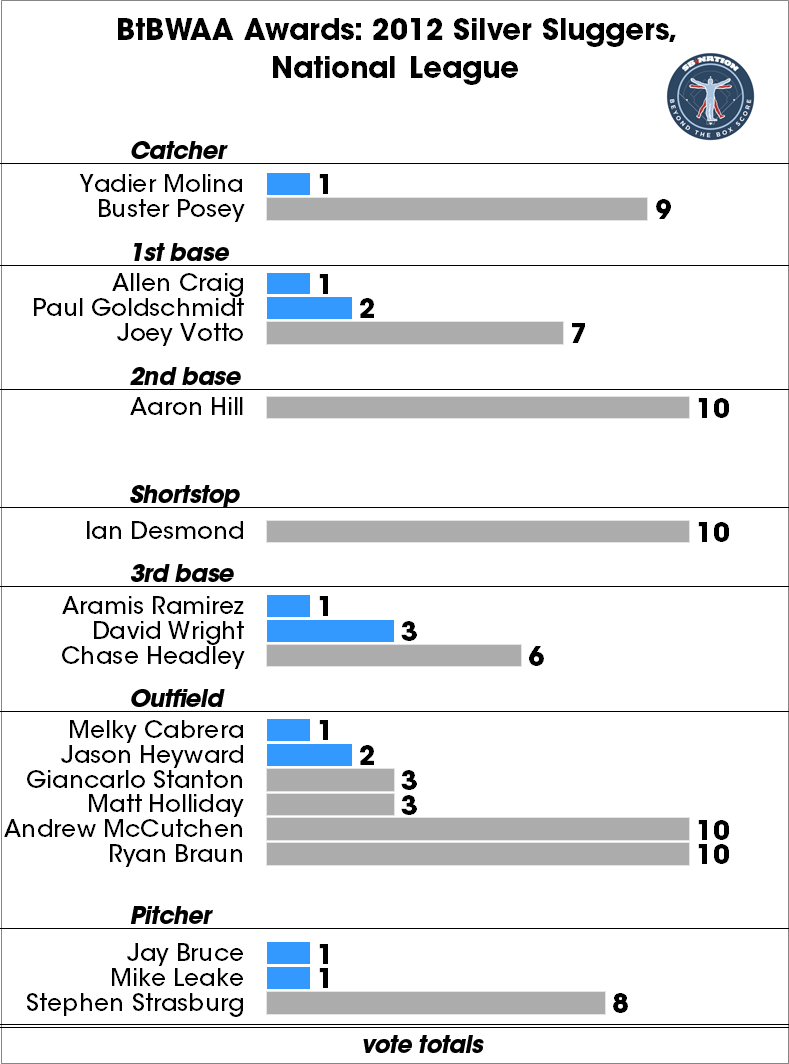 Of our nine winners (well, 10—we'll get to that in a moment), four were unanimous. As with the American League, there's no competition at second base as Aaron Hill gets 10 out of 10 votes at the keystone; Ian Desmond also gets our undivided support to be his double-play mate on this all-offense team. Meanwhile, Ryan Braun and Andrew McCutchen fill two of the three outfield spots without opposition.

Two more winners nearly joined the unanimity club too. Buster Posey comes just one vote away -- oddly enough, the lone Yadier Molina voter picked Posey for Most Valuable Player. Joey Votto beats Paul Goldschmidt and Allen Craig quite handily at first base, though I imagine he'd also have been a unanimous pick if he'd had 502 plate appearances instead of 475.

The remaining position players were much closer. I thought the difference between Chase Headley, David Wright, and Aramis Ramirez was quite small (each posted a wRC+ between 140 and 145), even if the third base race wasn't exactly a photo finish. However, we did have a tie for the third outfield spot betwitxt Matt Holliday and Giancarlo Stanton, with Jason Heyward, Melky Cabrera (how scintillating would it have been if he had won?), and Carlos Beltran getting support as well.

But my favorite vote of this whole segment is in the pitcher category, where Stephen Strasburg comes up victorious and Mike Leake ties for second ... with Jay Bruce. I won't reveal whose vote that was, but I will say his name rhymes with Blake Murphy.