The Tigers and Giants have earned their ways to the World Series. Each team boasts an MVP candidate in their everyday lineup, but a closer look shows that they have arrived here with radically different offensive makeups.

Share All sharing options for: 2012 World Series: A tale of 2 types of offenses

For those readers not familiar with fantasy baseball, there is one league structure where the players are dispersed to fantasy teams at the beginning of the season by means of an auction process. Each team starts with the same amount of money, and a full complement of players must be bought within this predetermined budget. While there are a number of strategies that fantasy team owners will employ in filling out their roster in these types of leagues, there are two overwhelmingly common philosophies.

The first is often referred to as "stars and scrubs". The idea here is to draft a few elite players (the "stars") early in the drafting process for high dollar figures, and rely on them to carry the team to glory. The bottom of the lineup is filled in with cheap, below-average regulars (the "scrubs"). With this technique, should the scrubs end up not playing regularly, or not playing well enough, there is opportunity to replace them on the roster with free agents available on a waiver wire. The thought is that it is possible to mix and match, ride the hot hands, and let the stars work their magic.

The second strategy, as you may be able to guess, involves passing on the superstars at the start of the draft. Let other owners pay, and often overpay, for the elite talent. Wait until that next tier of player comes along, the very good, but not great player, and then buy up a bunch of these guys. The thought is that the team will be more balanced, have few weak links, and be less prone to an injury to one star player ruining championship aspirations.

With respect to the 2012 World Series participants, Dave Dombrowski has employed the "stars and scrubs" approach to building the offense of the Detroit Tigers. Brian Sabean has chosen the more balanced approach in putting together the offense of the San Francisco Giants.

Here is the breakdown of the 2012 World Series teams by position: 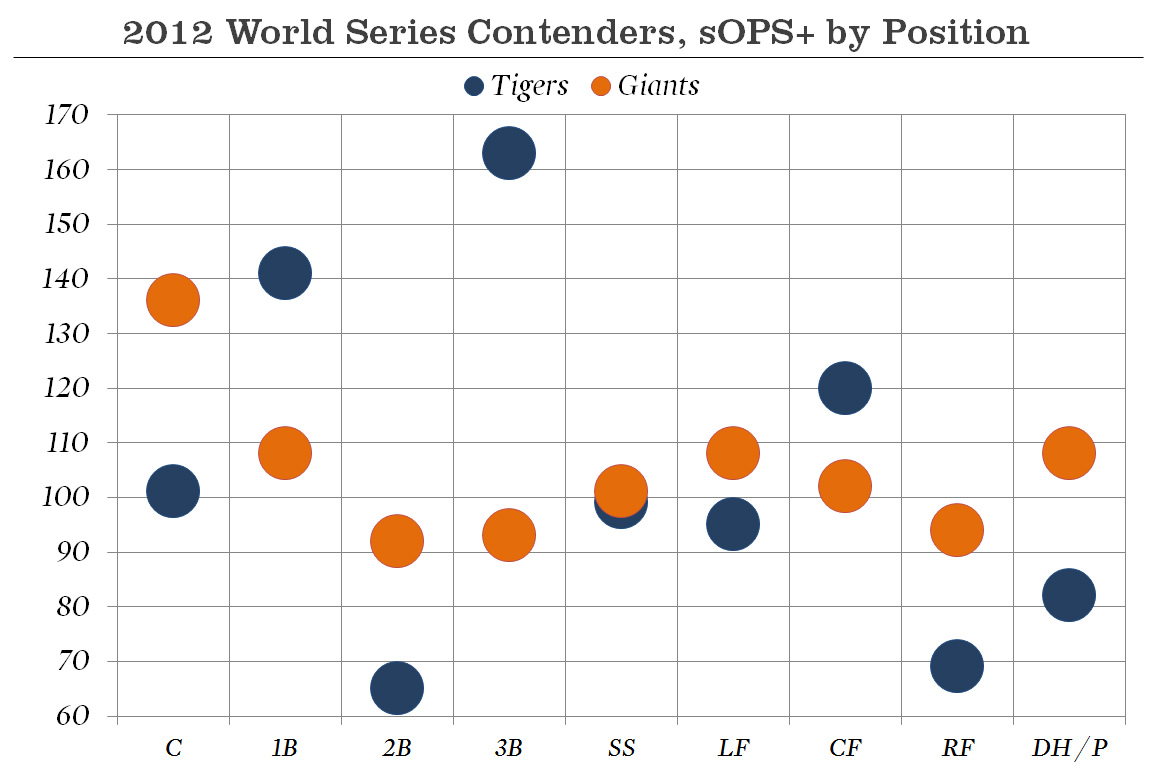 Consider first the AL champion Detroit Tigers. Led by AL MVP candidate Miguel Cabrera, the Tigers got excellent production from their "stars" at both corner infield positions as well as center field. Offseason addition Prince Fielder certainly pulled his weight (which is not as easy as it sounds!) and Austin Jackson continued his success out of the leadoff spot in the lineup. The most striking aspect of this Tigers lineup though has to be the two positions where the production was more than 30% below the league average. There are "scrubs", and there are scrubs. Certainly every lineup is bound to have a weakness somewhere, but the 2B and RF positions were black holes for the Tigers in 2012.

Dombrowski and Leyland certainly followed the "stars and scrubs" philosophy, in particular at the second base position, swapping in and out different players throughout the season, trying to find an answer. They used seven different players at second over the course of the year, four of whom received at least 80 plate appearances while at the position. Ramon Santiago and Danny Worth were given the first opportunities, with the idea that Ryan Raburn would play outfield primarily but could fill in at second base as needed. Not surprisingly, being known more for his glove, Santiago did not display much in way of offensive contribution. He posted a dreadful sOPS+ of 46. Likewise, light-hitting Worth managed just an sOPS+ of 65 in his chances. Raburn was then also given a look at the position, but slumped to an absolute disastrous season that included a stint in the minor leagues. The second base split could have looked even worse, but amazingly Raburn did his best work at the keystone sack, with an sOPS+ of 70. His outfield splits were abysmal, at 24 and -24 in left and right field, respectively. After three unsuccessful attempts, Dombrowski made his big move, acquiring the expected competent bat of Omar Infante from the Miami Marlins in a late-July trade. Bringing an sOPS+ of 112 from the Marlins looked like the perfect move to solidify what had been a sore spot all season for the Tigers. Unfortunately, while offering a slight upgrade given the competition, Infante regressed down to an sOPS+ of 77 while playing second in a Detroit uniform.

The goat in right field is a little more simple to identify, with Brennan Boesch accounting for close to 70% of the plate appearances at the position. Boesch had earned the confidence of his skipper after a solid 2011 season, where he played to an sOPS+ of 116 in right field. However things never really got going for Boesch in 2012, as he performed well below the league average right fielder for an sOPS+ of 70. In limited opportunites, Quintin Berry and Andy Dirks performed admirably with sOPS+ scores of 256 and 128, respectively. Their efforts were wiped out by equally disappointing results from Don Kelly, Raburn and Jeff Baker posting sOPS+ scores of 3, -24 and -26. Avisail Garcia rounded out the right fielders, with an uninspiring sOPS+ of 80.

To put into context how hard it is to succeed with two wasteland positions, consider this list of teams who had to endure such performances in 2012:

Only five big league clubs played the 2012 season with as many as two positions this far underwater offensively. The astute reader will notice that the four non-Tiger teams on this list all finished the season below .500. The reason that I have listed the team OPS+ and offensive park factors in this table is due to the fact that it would appear that sOPS+ is NOT park or league adjusted. The reason for this belief is that the sOPS+ split for "2012 season" gives a different result than the OPS+ value for a given team. Also, looking historically at World Series participants, AL teams have noticeably higher team seasonal sOPS+ scores than do NL teams. In the case of the Tigers, this only makes their sub-70 sOPS+ position splits worse, as the Tigers play in (1) the American League, and (2) a home ballpark that inflates offense slightly. Park and league adjustments would bring their sOPS+ positional scores down even further. Hence the team OPS+ being lower than the team sOPS+ in the table for the Tigers.

Playing good team baseball would appear to be difficult with two holes in the lineup. So is it common for a team with such a problem to reach the World Series? The answer, as you might expect, is not so much. 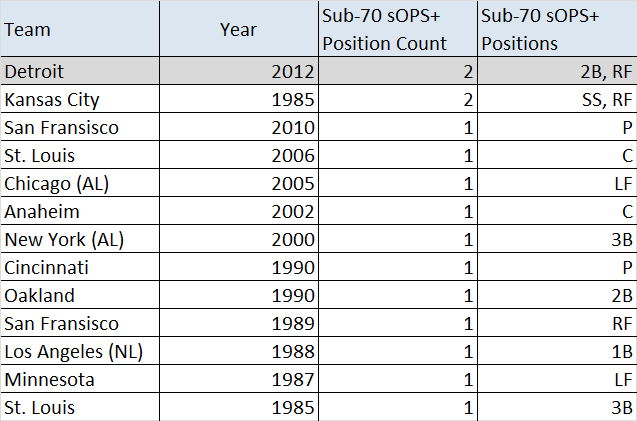 The last team to reach the World Series while having two sub-70 sOPS+ positions was the 1985 Kansas City Royals. Since that time, just 13 of of 54 Series participants have played with even one such liability. Of course park and league factors are not included in this stat, but it shows how rare it is for a team to overcome such issues to reach the Championship Series.

Returning to the original graph of sOPS+ by position, the most obvious observation for the NL champion San Francisco Giants is that every position not primarily manned by NL MVP candidate Buster Posey performed within the relatively tight +/- 10% band around the league average for that position. The 2012 Giants truly had no weak link, offensively speaking, with the worst performance coming from their second base spot, but even this was a much more manageable sOPS+ of 92.

GM Brian Sabean made his big acquisition at almost the same time as Dombrowski, trading for Marco Scutaro. Scutaro buoyed what had been an underwhelming second base situation, with Ryan Theriot getting the bulk of the playing time to that point. Theriot managed an sOPS+ of 83, while Emmanuel Burriss and others performed even worse, with Burris the next best of the bunch with an sOPS+ of just 46. Contrary to the Tigers' situation, Scutaro performed better than could have even been expected with his new team, to the tune of an sOPS+ of 155. His play over the final two months of the season salvaged a respectable overall performance from Giants' second basemen in 2012.

Hunter Pence was then acquired just days later in an attempt to upgrade an already adequate right field situation. The pickup proved especially wise after the Giants' other star, left fielder Melky Cabrera, tested positive for PEDs two weeks later and was suspended for the remainder of the regular season and beyond. After sporting an sOPS+ of 105 in right field for the Phillies, Pence unfortunately saw his performance suffer after the deal, as he posted just an sOPS+ of 76 in right field for the Giants. Luckily Nate Schierholtz and Gregor Blanco had good results in their opportunities in right field, with sOPS+ figures of 105 and 101, respectively.

Assembling a lineup full of solid regulars is a credit to Sabean, as well as bench boss Bochy for finding the right combinations to prevent a big hole in the order. Is it common for a World Series team to get more or less "average" contributions from nearly everyone in their offensive unit? The answer, again, is not so much.

Since the same 1985 season where Royals employed two sub-70 sOPS+ positions, the 2012 Giants are the only World Series participant with as many as eight players in the 90 < sOPS+ < 110 band. Again as a reminder, park and league effects are not included in sOPS+, but given the available context, they are alone in this respect. While the Giants clearly had one "star" in their lineup throughout the entire season in Posey, they successfully executed the balanced lineup strategy discussed earlier for the remainder of the positions.

Teams that reach the World Series are clearly making a lot of good decisions along the way. Of course pitching and defense play huge parts in deciding games, and neither of which have been discussed herein. When it comes to building an offense, the 2012 league pennant winners are good examples that there is no one way to succeed.

Detroit plays in this World Series with mid-season addition Omar Infante at second base, and will seemingly try its luck with Avisail Garcia in right field. San Francisco will trot out their regular lineups, sans Melky Cabrera, with less stars but less weaknesses.

May the best team win.

Credit and thanks to Fangraphs and Baseball Reference for data upon which this analysis is based.