The Rangers have a nice little problem on their hands: they have a good, young, cost-controlled shortstop in Elvis Andrus, a star second baseman under contact in Ian Kinsler and the best prospect in baseball, shortstop Jurickson Profar.

One of the hottest topics this offseason is going to be the Texas Rangers, and how they handle the expired contract situation of Josh Hamilton. Hamilton's situation and the middle infield one are actually very closely linked, as the Rangers could elect to move one of their middle infielders to center field and allow Hamilton to walk (just kidding, we all know Josh Hamilton can't take a walk).

There are a number of possible scenarios, and I will look at all of them

This is the most unlikely situation, as it would involve trading a player who is just starting a five-year, $75 million extension. At 30 years old, that contract is not going to be attractive to many teams. The scenario mentioned above also would leave potential for an offensive disaster in Arlington next season if Profar fails to put up a phenom season like all 20-year-old players are supposed to now (tongue planted firmly in cheek).

Baseball Prospectus's PECOTA projects Profar for just 0.3 WARP, and that would be if he plays shortstop next season. At second that number would be at or below replacement level because of the positional adjustment. Kinsler is projected by PECOTA to post a WARP of 3.1, meaning that this move would cost the Rangers about 3 wins according to the projections.

The factor that has not been mentioned to this point is that Kinsler costs extra money, and next year alone he will make $13 million, or $12.52 million more than Profar will. This money could be allocated towards a center fielder such as BJ Upton, Shane Victorino or even Angel Pagan. $12.52 million would be likely be enough to acquire any of those players, and their projected WARPs are 2.3, 2.4, and 1.6 respectively. (Craig Gentry, the Rangers incumbent CF, is projected for 0.5 WARP.)

Although I'm probably oversimplifying it, here is how this scenario would play out:

Rangers Get: Anywhere from 1.1-1.9 wins above what they would get from Gentry according to PECOTA, as well as some added payroll flexibility and the ability to start Profar from day one.

Rangers Lose: Ian Kinsler and roughly 2.8 WARP according to PECOTA.

This scenario would involve thinking outside the box a little bit, sliding Kinsler to the outfield while keeping all three middle infielders on the team that way. This scenario gives the most positional value, putting the three assets at the three toughest non-catcher positions. 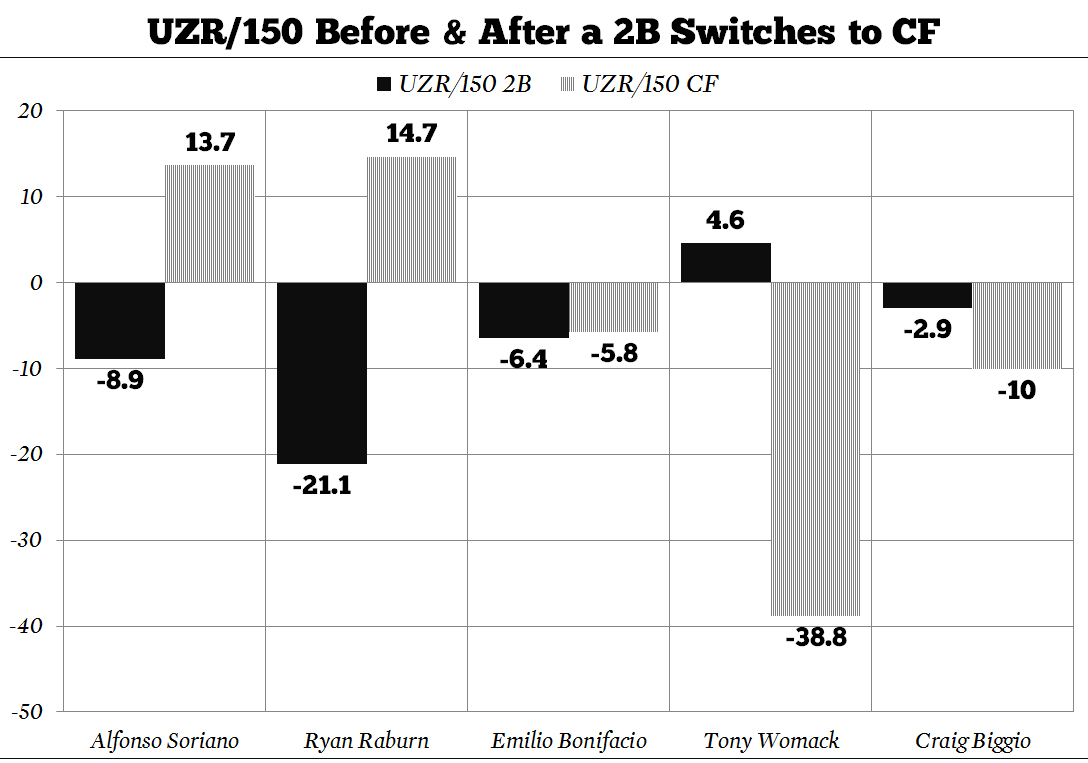 As one can see from the charts above, in an extremely small sample (I repeat: extremely small sample of the dangerously fickle statistic UZR/150), second basemen have had mixed results moving from their position to center field. It probably is not a good sign that the two biggest jumps came from the two smallest samples, and that the two negative impacts came from larger samples (although still small).

Although in terms of pure skill, Kinsler will probably do worse in center field than he would at second base, it is important to account for the position adjustment that switching positions would give him. The replacement level is lower in center field than it is at second base, meaning Kinsler's position value could cancel out any hit in defensive value. His bat would certainly be among the best at his position.

This one is the hardest to gauge in terms of projected value, because it is tough to project what would become of Kinsler in center field. The upside here is that if Profar appears over-matched, he can be sent to Triple-A without huge ramifications.

3.) Re-sign Josh Hamilton and send Jurickson Profar back to Triple-A.

This would be sticking with the status quo, which is not always the sexy thing to do, but it may make sense for Texas.

The issue with giving Hamilton 5-6 years is that, by the end of the deal, Texas could be severely overpaying for his services. Let's say Hamilton is given a five-year, $125 million contract (seems like that's in the ballpark of what he'll get) by Texas. In the first year of the deal he is projected for 3.4 WARP. That means it would cost Texas $7.35 million/WARP. This seems like an overpay, but when one factors in that Texas is in win-now mode, it makes sense for them to overpay for their star.

The problem here is that by 2017, the Rangers would be paying $36 million to Hamilton and Kinsler, two players who -- according to PECOTA -- are projected for a combined 3.4 WARP, meaning it would be costing the Rangers $10.58 million/WARP, which could be crippling.

The benefit here is in the short-term -- there is less risk for Texas, and it would position them better for a title-run now. The downside is that in a few years, sticking with the status quo could put them back where they were in the early-2000s: a high payroll and dead last.

This one offers the most hypothetical scenarios, as Texas could leverage Andrus for any range of needs that they have. Andrus could be enough to pry Justin Upton from Arizona (although that could be unlikely, as they just acquried Cliff Pennington), David Price from Tampa Bay or -- as I suggested on Twitter -- Yoenis Cespedes and prospects from Oakland.

All of the above trades would be fun and fill a sort of need for Texas, but despite the holes they could fill, I failed to mention the one it could create. Andrus is signed for next year at a price of $4.8 million. Of the four shortstops who ranked higher than him in fWAR in 2012 (Jimmy Rollins, Ian Desmond, Ben Zobrist and Jose Reyes), the only player signed for cheaper is Desmond, who is not arbitration eligible yet. Rollins is making $11 million in 2013, while Reyes is making $10 million and Zobrist is making $5.5 million.

The issue here as well is that the Rangers would be throwing Profar into the fire by starting him at shortstop on a team that is expected to win the World Series, something that could be potentially disastrous. Although Profar has good make-up and handled himself well in high pressure spots last year, he is still just a 20-year-old kid who is learning how to play the game and adjust to the major league level.

No matter which route they go, Texas is going to have some tough choices to make. Jon Daniels and the rest of the Rangers' front office have an opportunity here to shape the future of this franchise, depending on how they play this situation. It should be fun to watch.