In an extremely unlikely turn of events Barry Zito is starting Game 1 of the World Series. How does one of the worst pitchers since 2007 get to do that? He had some luck on his side.

Share All sharing options for: Barry Zito: From career-in-question to World Series starter

Tonight at 8 PM eastern time, Barry Zito will be taking the mound in game one of the world series for the San Francisco Giants. Think about that for a minute. Tim Lincecum isn't starting, Madison Bumgarner isn't even starting. After receiving one of the biggest contracts ever for a pitcher at the time, how did Zito get into this position? Let's find out.

In 1999, the Oakland Athletics had the ninth overall pick in the MLB draft. They used that selection on Pac-10 player of the year, Barry Zito. After spending a year and a half in the minor leagues, Zito made his major league debut. In 14 starts he was very impressive, posting a 57 ERA- and 81 FIP-. Although he struggled with his command, walking 12% of batters, he also struck out over 20% of batters.

In 2001, Zito became one of the better pitchers in the game. He improved his control as his walk rate droppd by 4%, and he struck out 2% more than a year ago. He had a 79 ERA- but his 82 FIP- was nearly identical to his 2000 season. Zito was beginning to look like an ace, but it wasn't like the Athletics didn't already have one at the time. Paired with Tim Hudson and Mark Mulder, the Athletics had one of the best rotations in the game, and in 2002 it was going to get even better.

2002 was the year Zito truly broke out. He won the 2002 Cy Young award and cemented himself as one of the best pitchers in the game. He finished with 6.9 rWAR, and beat out the likes of Pedro Martinez and Derek Lowe for the award. At the time he posted a career high in innings pitched, but also saw a dip in his strikeout percentage.

From 2003-2006 Zito remained a solid starting pitcher, totaling 14.8 WAR during that time, an average of 3.7 WAR per season. Yes he was still a good pitcher, but there were some signs that appeared concerning.

In 2007 Barry Zito became a free agent and landed a 7 year, $126 million dollar contract with the San Francisco Giants. The Giants were assuming that they just signed one of the best pitchers in all of baseball, but what they got was quite the opposite.

In his first season as a member of the Giants he was less than satisfactory - he posted the worst season of his major league career. His K% was the worst it had been since 2003, he had the highest ERA- of his career, and he pitched the fewest innings of his career. In fact, Zito would never pitch 200+ innings in his career again.

If you look at this graph it shows Zito's single season WAR totals, and as a member of the Giants he's posted a negative WAR three times! He didn't post one season with a negative WAR in Oakland. 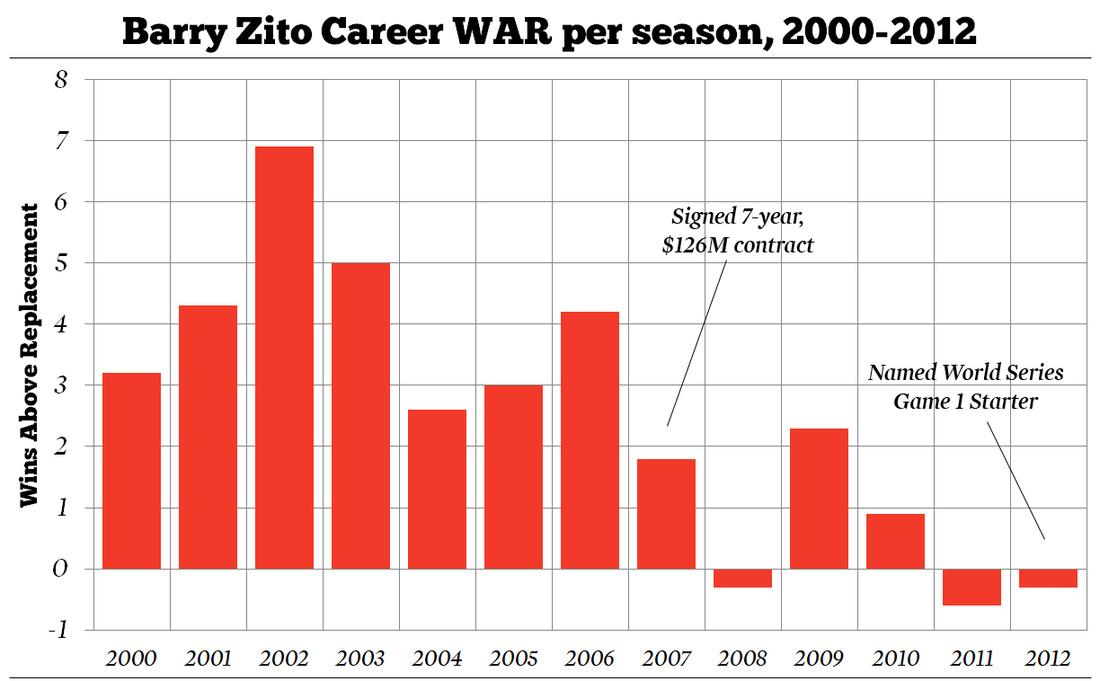 How did Zito go from one of the better pitchers in the game all the way down to one of the worst? One possible explanation is that he saw a drop in his fastball's velocity. During his time in Oakland, Zito's fastball sat around 87 MPH. In his last season he saw it drop to 85 MPH, which is definitely concerning.

During his first two seasons in San Francisco Zito saw his fastball drop to 84 MPH, but in 2009 he saw it rise to 86 MPH, in what was his best season as a Giant. The next three seasons it dropped one MPH, which means he finished 2012 with an 83 MPH fastball. Keep in mind that it was 83.9, compared to 84.1 last year, so not a huge drop at all.

If we look at some pitch values we see some more concerning numbers. 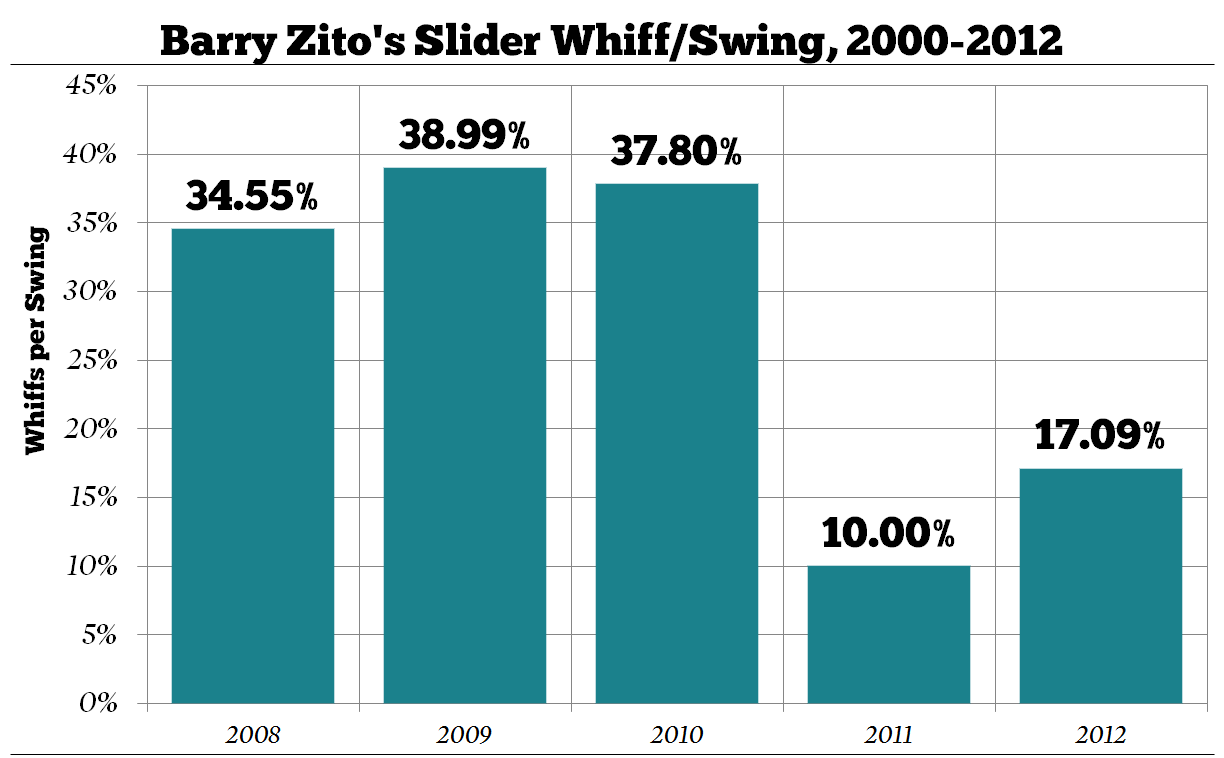 In this chart, notice how drastically Zito's whiff/swing% fell off when using his slider. 2009 was his best season as a Giant, and during that time he generated a whiff/swing% of 32% (meaning that 32% of all swings his slider generated missed). The last two years it's faced a pretty significant drop off though, coming in at 10% and 17.09%. The most logical explanation that I can think of is that his slider lost its movement that made it so good. In 2009 his slider had movement of -3.36 HOR and +3.23 VER. In 2011 it was -1.01 HOR and +4.49 VER. Finally, in 2012 it was -1.66 HOR and +3.36 VER, meaning that it probably was decreased movement that decreased its effectiveness.

After all of that Barry Zito somehow finds himself starting game one of the world series. If you would have told me that at the beginning of the season I would have said you were crazy. But that's baseball, and that's why baseball is the best game in the world.