Brad Ziegler did something very new this season. He recorded a higher percentage of ground balls than any other relief pitcher of record. Ever.

On July 31, 2011, the Arizona Diamondbacks made a deadline deal to acquire Brad Ziegler from the Oakland Athletics. The D-Backs gave up Brandon Allen and Jordan Norberto in the deal, and when it happened, my initial thoughts were something like "oh, the A's win that deal, they only gave up a reliever." Of course, Brandon Allen never panned out, and while Jordan Norberto was a decent reliever in his own right, Ziegler is still the name of note in this deal.

On October 2, 2012, Ziegler made his last appearance of the 2012 season, coming on in relief against the Colorado Rockies. He faced four batters, and allowed two ground balls (while striking out two other hitters), giving himself a 50% ground ball percentage. For Brad Ziegler, that's actually a pretty low percentage.

See, Brad Ziegler gets ground balls at a rate that, well, no other pitcher gets. In 2003, FanGraphs started tracking GB% on their site. Would you like to know how many qualified pitchers, starters or relievers, have managed to get a larger percentage of ground balls than the Diamondbacks' sidearmer?

Ziegler did something no pitcher has done before, that we know of. His GB% was historically low, passing Jonny Venters's 2011 mark of 72.5% for the highest percentage of grounders in history for a qualified reliever. In a year where we're talking about otherworldly K% from guys like Craig Kimbrel and Aroldis Chapman, relievers are also breaking new ground* in terms of GB rate.

For the purposes of this table, I wanted to show how Ziegler compared to league average, and to another pitcher: the Dodgers' Jamey Wright. Wright's a neat example, because he was the second-best reliever at getting ground balls for 2012, but instead of getting 3/4 of balls in play to be grounders, his rate was closer to 2/3. Not a small difference. I'd also like to point you towards that GB/FB rate. Do you see the massive differences both between Ziegler and Wright, as well as the difference between both pitchers and the league average?

The craziest thing is that Wright's GB/FB rate is the second-highest in baseball over the last 10 years. That means that in 2012, Jamey Wright hit the previous high mark for highest GB/FB rate that has been recorded, only to see it dwarfed by Brad Ziegler.

I also especially like the HR/FB stat for Ziegler. Ziegler gave up so few fly balls this season, it gives a remarkably small sample to see how many would fly over the fence. But even in that tiny sample, Ziegler wasn't over the league average for relievers by a crazy-high amount. In fact, Ziegler gave up his only two homers of the 2012 season in his last five appearances. Had he ended his season a little early, he would have escaped with no homers allowed.

So, how does Brad Ziegler get his ground ball outs? Well, for starters, he's a right-handed side-armed pitcher, which basically makes him a specialist at getting righties out. Take a look at this view for right-handed hitters: 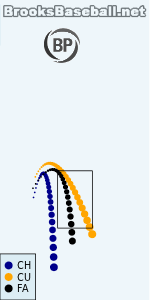 Basically, Ziegler's pitches (a fastball, curveball and occasional changeup) are very tough to pick up when you're a right-handed hitter. Beyond that, Ziegler works down in the zone, making it very hard for a hitter to loft the ball in the air. How hard? Refer back up to the stats above. Even if you can hit Ziegler, odds are that you're not putting that ball in the air. It's about a 1-in-4 chance of you getting the ball off the ground, in 2012.

And if there's a runner on base? Oh boy. Ziegler induced 21 double plays last season. That's good enough to tie him for 18th in major league baseball. Except instead of doing it in 160-210 innings, like everyone else on the list above or equal to him (exception: Derek Lowe, who got 23 GDPs in 142-2/3 innings), Ziegler did it in just 68-2/3 innings! That's a pretty staggering number.

The other thing about Ziegler and his role with the Diamondbacks, is that the team might benefit from using him in a bit more of a ROOGY role, when possible. Ziegler actually faced 85 left-handed hitters, as compared to 178 right-handed hitters. That's a little less than twice as many righties as lefties faced. The problem is, Ziegler is much, much less effective against lefties. Perhaps due to working out of the zone, or being willing to put a batter on base in order to get to a right-hander who could hit into a double play, Ziegler's walk rate skyrockets to about 14.1% against lefties, compared to just 5.1% against righties. But those left-handed batters got Ziegler in trouble last season, as he gave up more runs in the 19 innings pitching against lefties than he did in nearly 50 innings pitching to righties.

Brad Ziegler still isn't an elite reliever like Craig Kimbrel or Aroldis Chapman. But he does have an elite skill like those two fireballers in his ability to induce grounders. While a specialist in ground balls might never be as effective as an elite strikeout artist, if Brad Ziegler continues to get grounders at the rate he got them in 2012, he'll continue to be an incredibly effective reliever.

Not to mention a pretty unique pitcher.