In the second installment of Beyond the Box Score's 2012 awards, we offer our picks for the American League's best hitters at each position.

Last week, we kicked off our awards announcements by revealing our pick for MLB Executive of the Year. This week, the series continues with the Silver Slugger awards, starting with the American League (NL to come later this week). 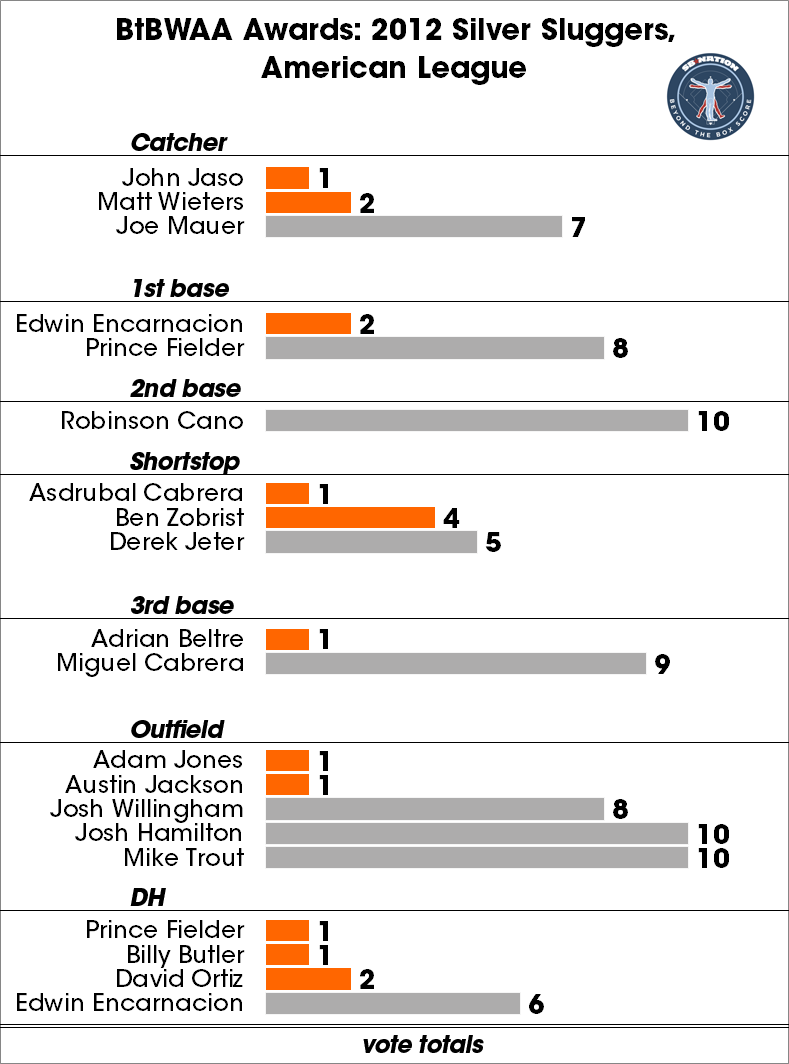 First off, let's give a big hand for our three unanimous picks: Robinson Cano, Mike Trout, and Josh Hamilton, all of whom had excellent seasons and are well deserving of the honors (but of course you knew I was going to say that because I was one of the voters). I also think it's fascinating that a Triple Crown winner wasn't the unanimous choice at his position. I don't want to give any spoilers about the awards to come, but that doesn't bode well for his chances in the MVP race.

Moving on, Joe Mauer ends up victorious behind the plate, though I'm intrigued by how much support Matt Wieters got (I'd love for someone who chose him to explain why). Prince Fielder handily dispenses with Edwin Encarnacion at first base, but that's because most of us considered Encarnacion a designated hitter. Derek Jeter barely squeaks ahead of Ben Zobrist at shortstop—I'm guessing the vote would have been far more skewed in either direction if there had been broader agreement about what position Zobrist should be categorized as—and Miguel Cabrera runs away with the voting at the hot corner, though a solitary vote for Adrian Beltre prevents him from achieving unanimity.

Personally, I voted for Mauer, Encarnacion, Cano, Asdrubal Cabrera (I would have voted for Zobrist, but he played more games in right field and at second base than at shortstop), Miguel Cabrera, Trout, Hamilton, Josh Willingham, and David Ortiz.