Transitioning from relief to rotation: does velocity come back?

Twenty pitchers moved from the bullpen to the rotation since 2002. Two years after the move were they able to see their velocity return?

Share All sharing options for: Transitioning from relief to rotation: does velocity come back?

Just over a week ago I took a look at how pitchers performed after moving to the starting rotation. I looked at changes in their ERA-, FIP-, and K%. I wanted to go a little further though, and see how their fastball velocity was affected after making the transition. I hadn't seen this study done before, so I was intrigued as to what I would discover.

I went to FanGraphs' custom leaderboards and gathered all pitchers who pitched at least 40 innings as a reliever, and then the next two years became starters. Since FanGraphs only has fastball velocity since 2002 I was only able to come up with twenty one pitchers. I understand that the sample is small, so bear with me.

First I looked to see how much velocity pitchers gained or lost when making the switch to the rotation. 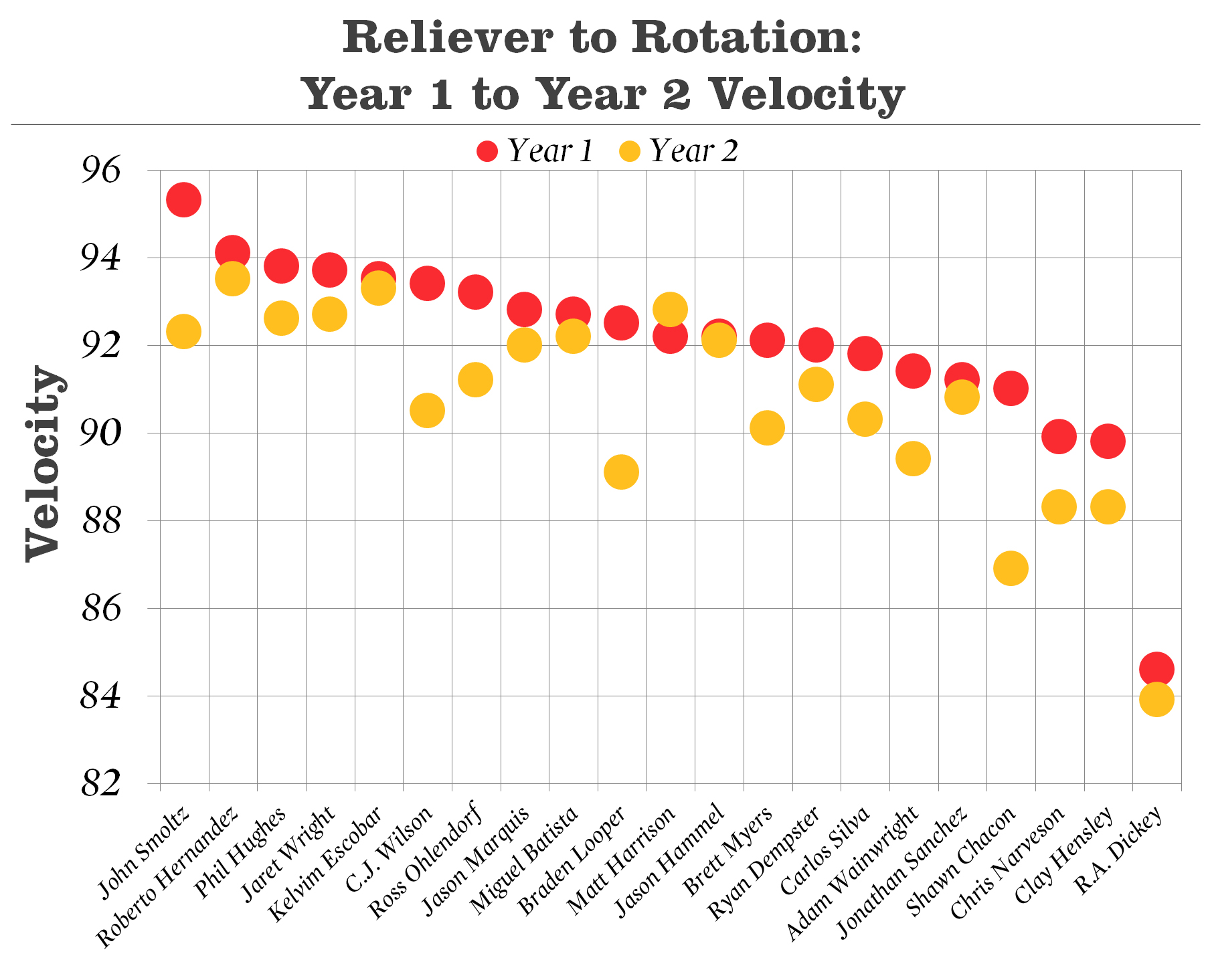 This first chart shows how the pitcher's fastball velocity changed after switching to the rotation during year one and year two. Generally pitchers didn't see a huge spike or loss in their velocity when switching from the bullpen to the rotation. We can see that 75% of the variability of a pitchers' fastball can be based on his velocity when he was in the bullpen. That doesn't mean that there weren't some extreme cases though. If we look at our chart we can see that Shawn Chacon lost almost 5 MPH on his fastball. C.J. Wilson and Brandon Looper also saw losses. They each lost around 3 MPH off their fastball.

Next I found the p-value for the pitchers' fastball velocity in year one and year two. The results of the t-test were not that significant, it only returned a p-value of .5. 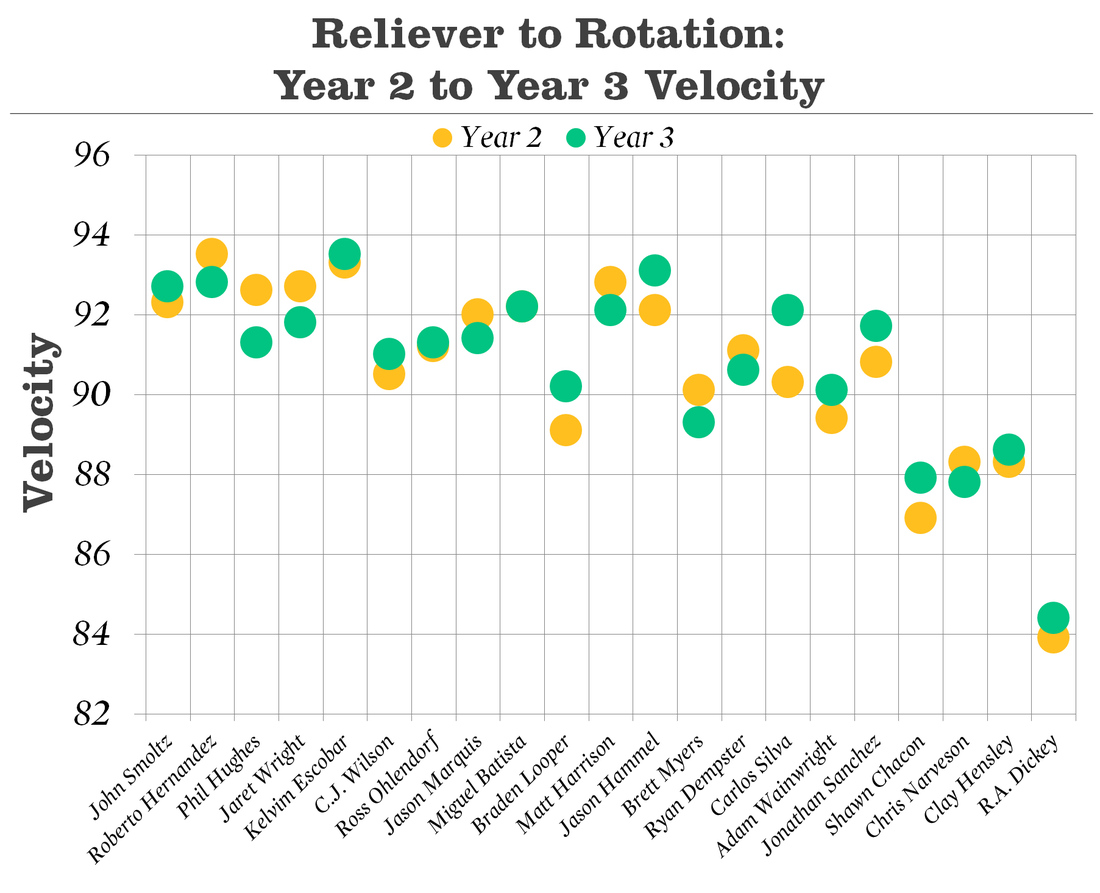 After pitching in the rotation for two years, starting pitchers didn't regain velocity. In fact, in some cases they lost a little more. Jason Hammel was an exception, he actually gained 1 MPH on his fastball. During his last year in the bullpen his fastball hit 92 MPH, and in his second year starting it hit 93 MPH. Phil Hughes managed to lose over 2 MPH on his fastball, as did Roberto Hernandez, formally known as Fausto Carmona. So even though these pitchers had a chance to stretch out, after two years they stillweren't able to regain velocity. Personally, I found that interesting.

The last thing that I did was I looked to see how much the pitchers fastball percentage fell after their first year starting. 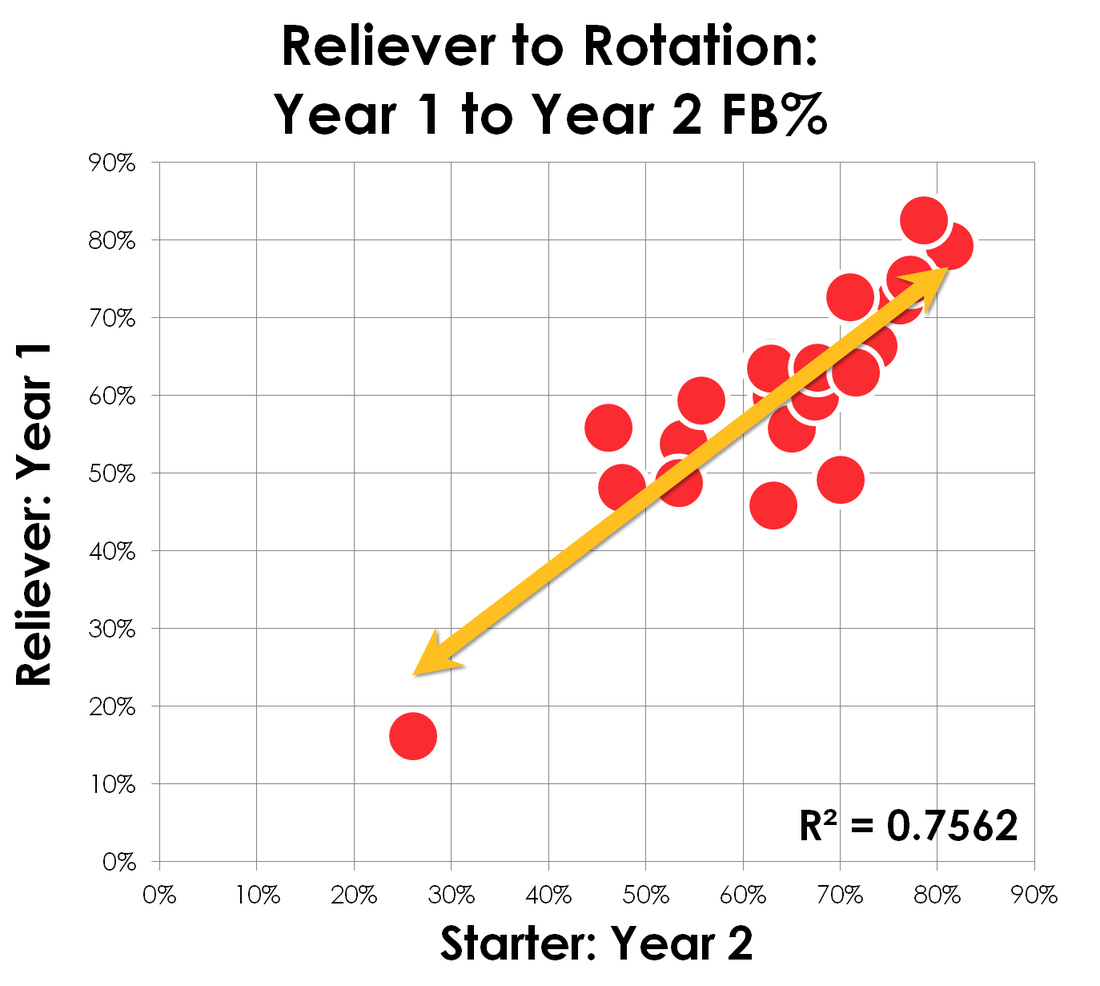 This chart shows the pitchers' fastball usage before and after they became a starter. Just by looking at this chart we can see that there were some pretty big declines. C.J. Wilson cut down his fastball percentage by 21%, going from 70% all the way to 49%. Chris Narveson also saw a substantial decline, going from 63% to 49%. The adjustment appeared to work for C.J. Wilson, but Narveson hasn't been as fortunate. 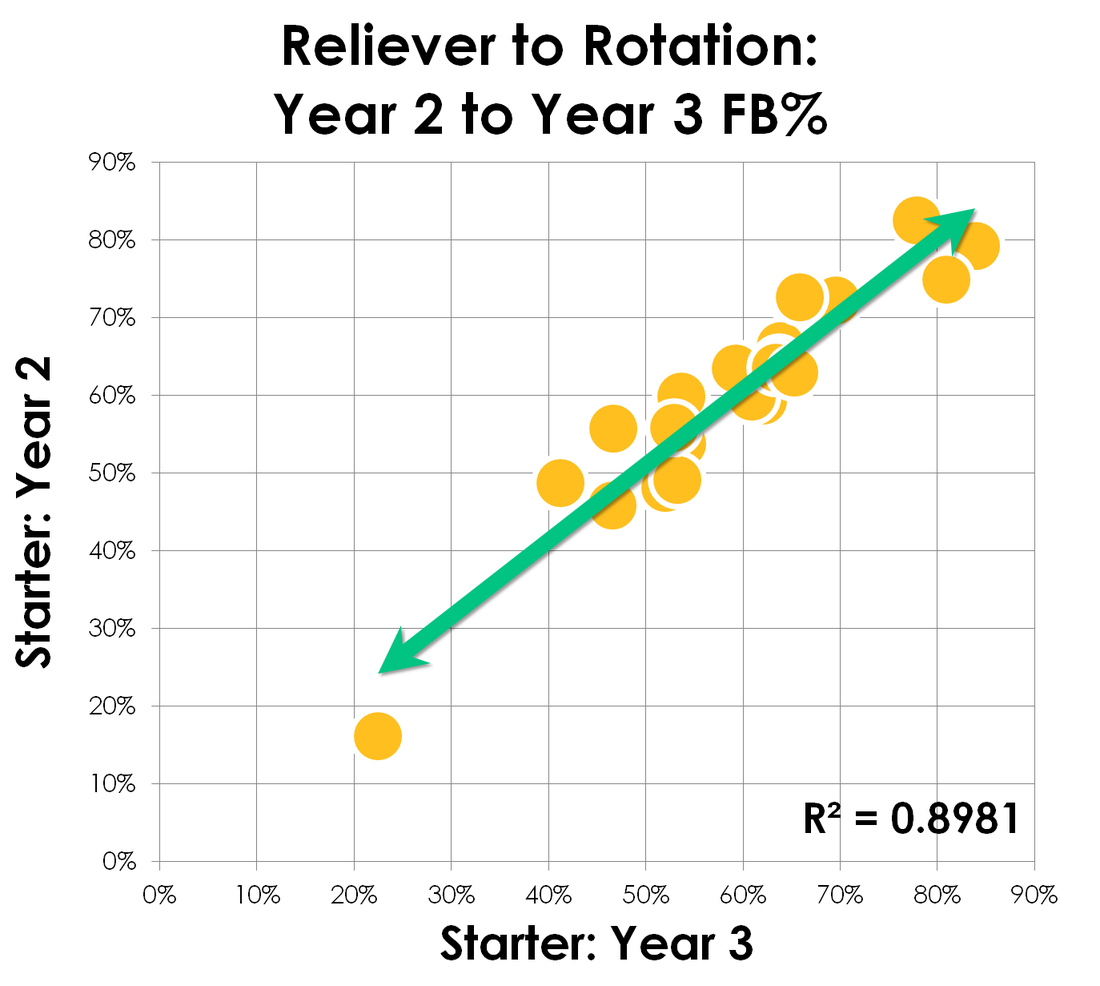 I ran a linear regression to see how well fastball percentage in a pitchers' first year starting compares to his second year starting. Generally their fastball usage remains pretty constant, but their are a few players who saw a decline or rise in their usage. John Smoltz saw one of the biggest drops. During his first year starting he used his fastball 55% of the time. In his second year he saw it drop 9 points, falling to 46%. Rather then use his fastball as much, he began to throw his slider more. Jonathan Sanchez also saw a decent drop. He went from throwing his fastball 72% of the time, all the way to 65% of the time. A good number of pitchers saw their fastball usage rise by roughly 3-4%, one example is C.J. Wilson. In 2010 he was throwing his fastball 49%, but in 2010 he started to throw it over 53%. 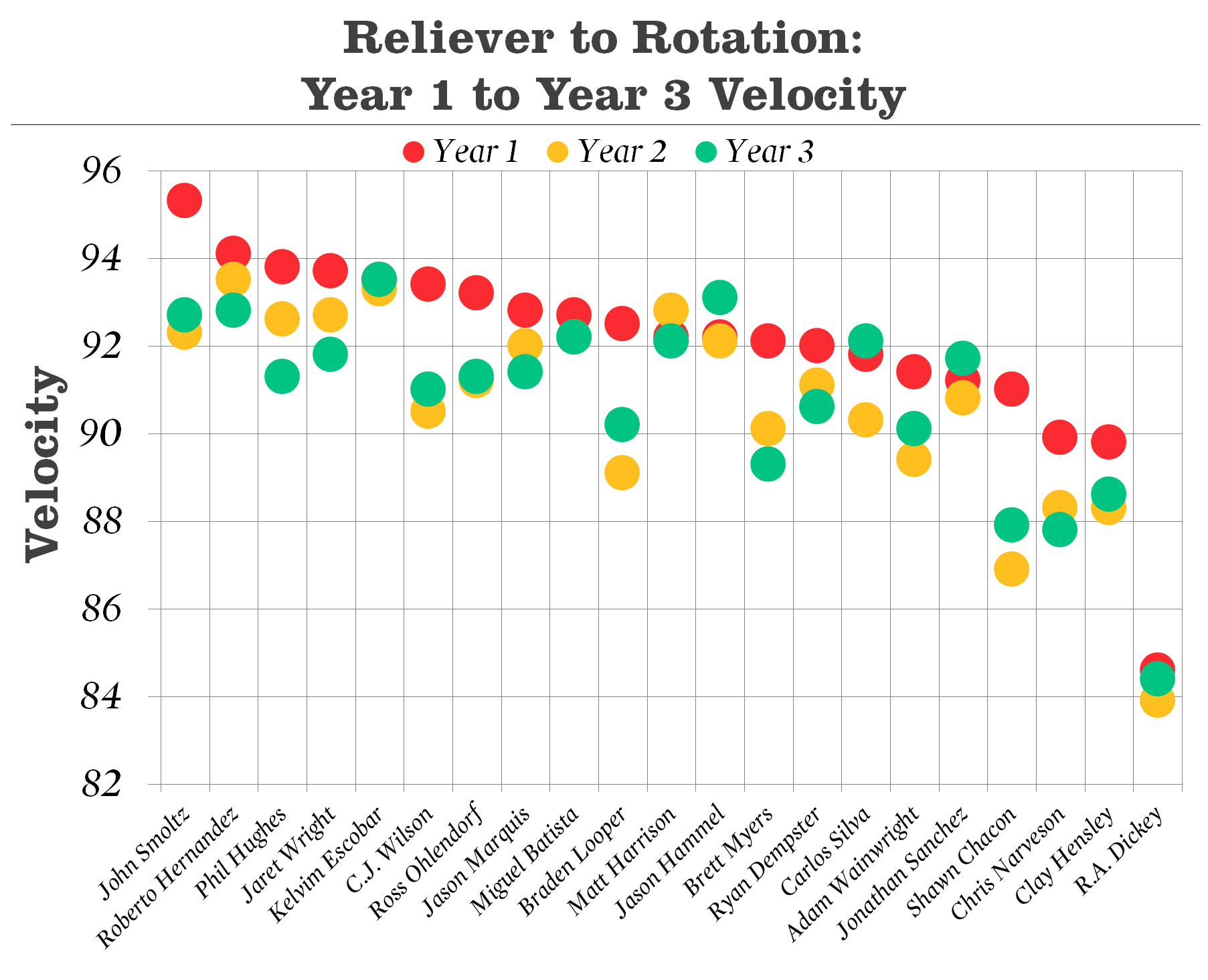 This final chart just shows the overall velocity changes that these pitchers have faced. Generally pitchers didn't lost around 0-2 MPH off of their fastball. Like I stated earlier, there were some cases where pitchers constantly lost a mile or two off their fastball, and in other cases they remained fairly static. 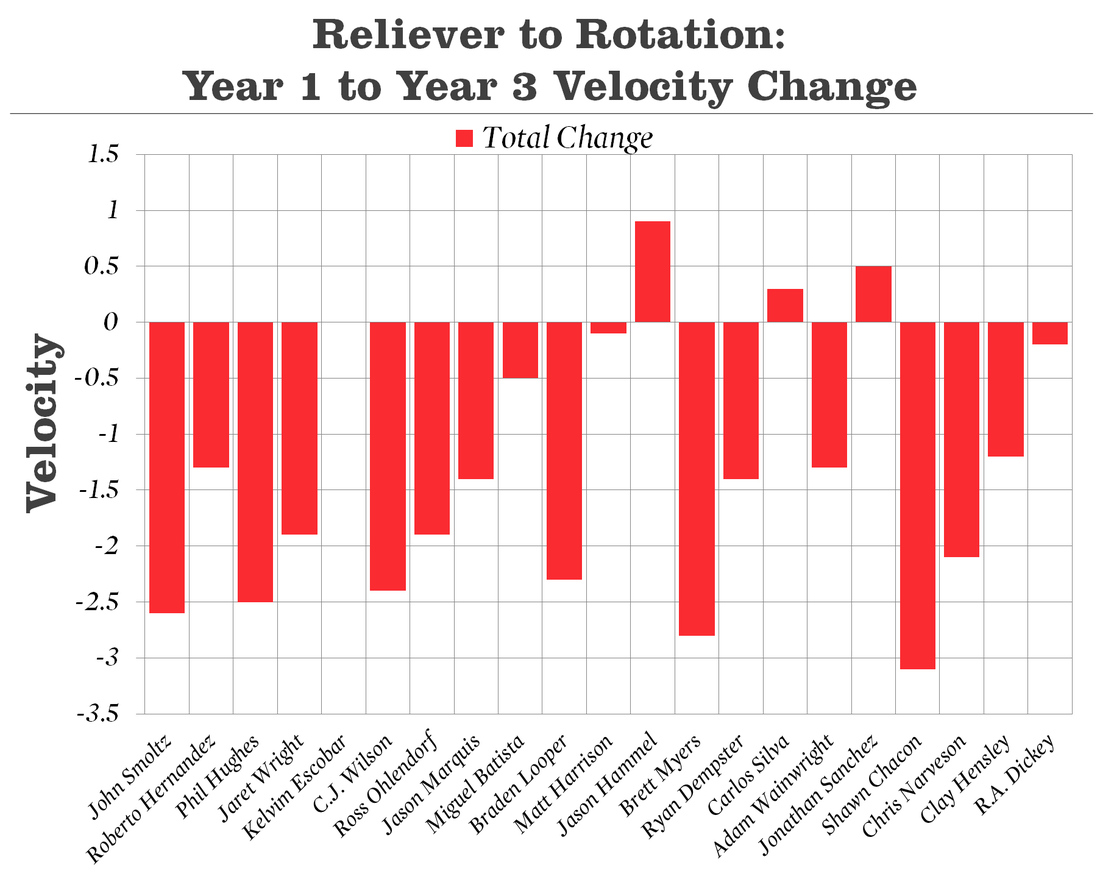 Overall there were some pretty significant drops, but this makes sense. When you're starting you need at least three or more pitches in order to succeed. As a reliever, C.J. Wilson used his fastball 70% of the time, but during his first year in the rotation it fell all the way to 49%. Chris Narveson also saw a big decline, going from 63% all the way to 45%. On the flip side, Ryan Dempster saw his fastball usage go from 46% to 55%. Jaret Wright also saw his increase by 4%, going from 78% to 82%.

The sample in this study wasn't huge, but I still think we got some useful information from it. We discovered that even after two years in the starting rotation, pitchers still don't regain the velocity that they had in the bullpen. This could be attributed to pitchers not trying to throw as hard, or some other factors. It will be interesting once more pitchers make the move in the future though. Maybe we will get a better sense of what to expect.

I want to give a huge thanks to FanGraphs writer, Bill Petti, for help on gathering the information and help on some calculations. I also want to thank Justin for helping with the graphs.