Does a long at-bat create an advantage for the hitter?

Share All sharing options for: Does a long at-bat create an advantage for the hitter?

Few moments in baseball are more thrilling than the walk-off homer, especially one that occurs in the post-season. If that post-season walk-off home run comes off of a hard-fought 13-pitch at-bat, it is utterly jaw-dropping.You may have forgotten after all the drama of the subsequent League Championship Series, but let me remind you that this scenario is exactly what happened to the Washington Nationals' Jayson Werth in the 9th inning of Game 4 of the NLDS.

Werth began the fateful at-bat in question by quickly falling behind 0-2 on two called strikes delivered by Cardinals' similarly-bearded closer Jason Motte. After patiently evening up the count at 2-2, Werth fouled off the next six pitches in a row, took the 11th pitch for another ball, fouled off the 12th, and then finally put the 13th pitch of the sequence ball in the outfield seats in Nationals Stadium. Here is his exact pitch sequence as depicted by Baseball-reference:

But how uncommon is it for a hitter to ultimately tattoo this 13th pitch into the bleachers after such a lengthy stand-off with a pitcher? Well, honestly, I'm glad you asked. In the 1015 plate appearances that went at least 12 pitches in that same time period, batters homered 3.84% of the time. In the 50858 plate appearances that went less than 12 pitches long, batters homered only 2.68% of the time.

To put that into perspective, a 1.16% increase in HR/PA over the course of a 650 PA season is the difference of about 7 HR.

But HR rate isn't the only aspect of the pitcher-batter matchup that seems to benefit from the extended plate appearance. In fact, in the 245 plate appearances that have gone exactly 13 pitches long from 2002-2011, the wOBA of those outcomes is a startling .381!

Good question. That is probably too small a sample to draw any significant conclusions from, yes. So let's attempt to increase the sample size of these extra-deep at-bats by expanding the reach of our data set back to 1988-- the year retrosheet's pitch counts first became available. With the new data, our 13-pitch sample nearly doubles to 460 PA, while the wOBA in those at-bats remains steady at .380. 460 PA may still not be an ideal number to work with, but consider that Batters also happened upon some of their best results in 12-pitch at-bats with an even more shocking .415 wOBA in just over 1300 PA.

Notice the slow but certain gains in wOBA batters make as the pitches pile up during an individual plate appearance: 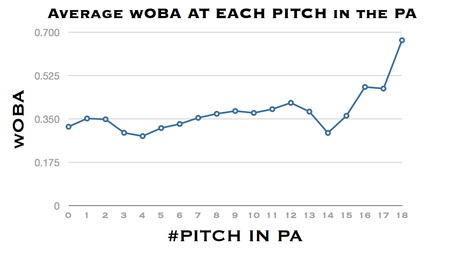 Now, keep in mind the sample size gets obscenely small towards the deepest at-bats here-- just 64 PA in 15-pitch at-bats, and even smaller beyond that. So reference those numbers at your own risk. But where the sample remains at least above 1000 PA, from 4-pitches to 12-pitches, there is a strong indication that the Batter gains an advantage the deeper in the count he goes.

Here is the full table for the 1988-2010 data, with K%, BB%, and other metrics included (Remember this table is measuring the outcome of those PA's that ended on the 'PA Pitch Count'):

What's interesting here is the source of the wOBA surge in those later at-bats. K% steadily decreases from it's peak at 27% at 5 pitches, then quickly falls down to 22% by pitch #9. Conversely, BB% steadily rises to 24% at pitch 9, where it remains through pitch #12. BABIP sees a small but significant increase from pitch-4 to pitch-9, but then begins to jump around quite a bit afterwards.

Perhaps a look at what happens after each pitch in the PA pitch count can help eliminate some of the fluctuations in these numbers. 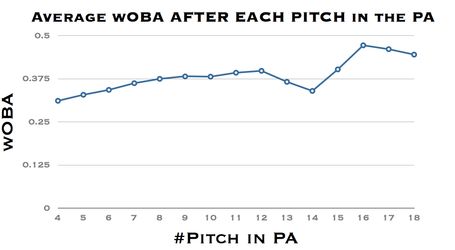 And the Corresponding Table (with OBP/SLG added):

It makes sense, intuitively, that the deeper into an at-bat a hitter goes, the more acquainted he'll become with a pitcher's delivery, release point, and most importantly, the velocity and movement of the pitches. With this increasing familiarity, it is certainly conceivable the hitter gains a decisive advantage. But is it that simple?

The first thing that came to my mind after running these tables is 'Sample Bias'. In other words, is the wOBA increase in these deeper at-bats only because the pitchers who find themselves in these counts are simply not as effective as pitcher's who don't?

I ran a quick check on the pitchers who had most often gotten themselves into counts of at least 10 pitches or more who had at least 500 BF from 2002-2011. No pitcher had more than .5% of his PA run more than 10 pitches long, and only 3 pitchers had 10-pitch PA percentages higher than .35%. Among the top 50 were plenty of no-names for sure, but among the best were late-inning flame-throwers with excellent reputations: Eric Gagne, Jonathon Papelbon, Brian Wilson, Heath Bell. The average FIP and wOBA-against of those top-50 pitchers over that time wasn't very convincing of a bias either-- their 4.35 FIP was just a hundredth above league-average in that span, while their .319 wOBAA was actually below average.

The problem with this group is that .5% of 500 PA is just 3 at-bats. And 3 at-bats is just too little to make any assumptions on. But if we attempt to raise the BF requirement, we are likely eliminating a lot of the ineffective pitchers we were hoping to find since, presumably, many of them never made it to more than 1000 BF.

Another possibility is that better hitters are more likely to work these extra-deep counts. As it turns out, Batters may have a slightly higher tendency to regularly work an at-bat into a +10-pitch count. Using the same 500 PA criteria from 2002-2011, I found 13 batters that worked extra-deep counts at least 1% of the time. But other than Jeremy Giambi, that list isn't all that impressive:

So is there a bias in the wOBA increase in these long at-bats? Maybe. But, I'm willing to entertain suggestions on how to test for it.

All data courtesy of the fine folks at retrosheet, includes post-season. All wOBA values from The Book, all FIP constants set at 3.2.