How is Kyle Lohse Doing This?

Kyle Lohse is one big reason why the St. Louis Cardinals are still playing baseball into late October in 2012. Despite his considerable success this season, many traditional sabermetric measures suggest that his numbers finished rosier than expected. Was this due to good fortune, or does Lohse have a secret recipe for success?

Share All sharing options for: How is Kyle Lohse Doing This?

After being drafted in the 29th round by the Chicago Cubs in the 1996 amateur draft, expectations may not have been particularly high for Kyle Lohse. He worked his way through the minor leagues, finally arriving at the big league level in a Minnesota Twins uniform midway through the 2001 season. Lohse recorded solid seasons as a starter in his first two full seasons in Minnesota, working with a fastball/slider/curveball/changeup pitch mix. According to the first available data from Baseball Info Solutions, Lohse offered his fastball 63.0% and 64.6% of the time in his early days in the majors, while throwing his curve over 10% of the time.

Fast forward to 2008, where, after brief stops in Cincinnati and Philadelphia, Lohse found himself with a fourth team in as many years, the St. Louis Cardinals. Lohse put together his best season to date in 2008, posting a 15-6 record with a sub-4.00 ERA for the first time in his career. The Cardinals obviously liked what they saw, and rewarded him with a four-year, $41 million contact at the end of the season.

Lohse did not provide much bang for the buck in the first half of that contract, throwing less than 120 innings in each of 2009 and 2010, with unsavory results. He rebounded in 2011, going 14-8 with a 3.39 ERA. This recovery, along with injuries to their other starters, led the Cardinals to look to Lohse as their opening day starter in 2012.

Lohse posted a sparkling 16-3 record with a 2.86 ERA in 2012, and may see some votes further down in the National League Cy Young standings when the results are revealed for this season. That said, if we look at some sabermetric viewpoints of his 2012 season, it looks much more average than the final stat line would suggest.

Wow, that's a lot of ways to analyze the same season! To start, we can see that his FIP, and in particular his xFIP and SIERA, are all much higher than his actual ERA. Much of this discrepancy stems from his below-average K% rate, which negatively affects all three of these metrics. His above-average home run per fly ball rate gets tossed aside in xFIP, making it look worse for Lohse than regular FIP. His low strikeout and low BABIP combination would not be seen in a positive light by SIERA, making it the highest of the three. Lohse's batted ball profile suggests a much higher BABIP, thanks in part to a pitiful, career worst in LD% given up of 23.9%. His LD% ranked him 4th worst of all qualified starting pitchers in the major leagues in 2012.

So far this isn't sounding promising. Sabermetric assessments of his season have soured what had appeared to be a stellar 2012 campaign. If we look a little closer, can we find any reasons for optimism that he can continue outperforming his peripherals?

In recent years, Lohse appears to have done exactly what many pitchers will do to survive as they age and lose velocity on their fastball - develop a new pitch. The addition of the new pitch for Lohse has run concurrently with his loss of more than 1.5 MPH from his average fastball velocity. According to Pitch F/X data, since his time with the Cardinals, Lohse has added a sinker into his pitch mix, which in the past two seasons has become his pitch of choice.

It would appear Lohse has been transitioning from his four-seam fastball to his sinker. This level of sinker usage ranked Lohse in the top ten in the league in 2012 among qualified starters. With this in mind, we can compare his performance on his most utilized pitch to other sinkerballers around the league. To start, in general a sinker would be a pitch that typically generates a lot of ground balls, as batters swing over the top of the ball, beating into the ground. The following graph compares Lohse's GB% generated by his sinker to his peers. It is organized such that the x-axis shows pitchers from left to right in decreasing order of sinker usage. 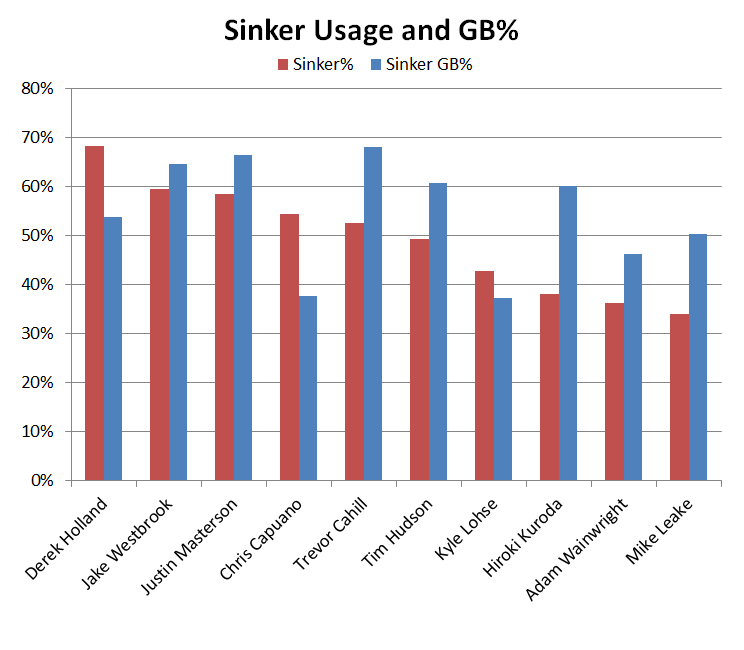 The graph shows that most of these sinkerballers generate ground balls on more than half of their sinkers. Lohse ranks last of the ten, at only 37.25%. So what kind of sinker is this so-called sinker? We can take a look at the horizontal and vertical movement his sinker gets compared to others on the list. 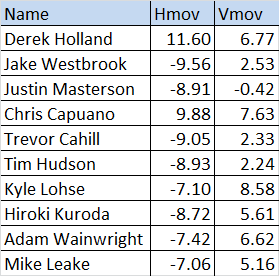 It feels counter-intuitive to see that most sinkers have positive vertical movements. A sinker is supposed to sink, right? The reason for this is the way that this movement is defined in the Gameday files, which is the amount of vertical break in the vertical axis compared to a ball with zero spin. Fastballs thrown by these pitchers would generate even higher vertical break numbers due to more backspin. Curveballs are typically pitches with negative vertical movement readings. Understanding this context, we can see a strong correlation between lower vertical movement figures in this table and higher ground ball rates, which makes perfect sense.

So Lohse does now throw a sinker, but it is not a heavy, ground ball inducing machine like most other starters that live and die by their sinkers. Where Lohse is the same is in his usage of the sinker at a much higher rate when ahead in the count than behind in the count, at least to left handed hitters.

The fact that this pitch is used so heavily when the batter is ahead in the count is likely a reflection that this has become the "control" pitch for these pitchers. That is to say, when they feel like they absolutely need a strike, they tend to turn to the sinker as the pitch they are most comfortable in hitting their target. Not surprisingly, given his low K%, Lohse ranks near the bottom in whiff/swing rate of the group. In fact in general, whiff/swing rates on sinkers are lower for these pitchers than others in their repertoire - they must really be meant to induce relatively safe contact more so than generate whiffs. Notice that Lohse throws the sinker to right-handed hitters at a similar rate regardless of the count. This would suggest that he either feels that he has no better knockout pitch against same handed batters, or he feels confident in the kind of contact righties will make on his sinker.

So what has his sinker really bought Lohse? In giving him a pitch that he can command, he has been able to get ahead of hitters at a much higher rate than before. How often, you ask? He in fact placed 3rd of all qualified starters in baseball this year with a first strike percentage of 68.8%.

The elite F-Strike% does a few positive things for Lohse. To start, we know that F-Strike% correlates strongly with BB%, so this is without a doubt a contributing factor to his career best 4.4% BB% in 2012. Limiting walks is obviously good for preventing runs, as limiting walks limit baserunners. It also means should Lohse walk a batter, it is less likely to develop into more of a rally due to multiple walks.

Getting ahead in the count also typically changes the way the batter has to approach the remainder of the plate appearance. As an example, look at Lohse's performance when up 0-1 compared to down 1-0 over his entire career and in 2012 alone.

He certainly improved across the board this season, but the main lesson here is that getting ahead in the count gives Lohse the upper hand and leads to a large improvement in plate appearance outcomes.

Pitching while ahead and throwing lots of strikes also has the effect of making hitters expect that every pitch could be in the zone. Lohse is now taking advantage of this, by having more of his out of zone pitches swung at than ever before.

Having hitters swing at offerings off the plate is desirable whether the hitter makes contact or not, as in theory you would expect weaker contact in these cases.

Unfortunately, to my knowledge there are not any good, publicly available measurements for the "quality of contact" for all types of balls in play. Perhaps the best we can do is consider the average length of home runs plus fly balls hit off of Lohse this season, and compare that to his career norms.

Certainly there was some tangible improvement in 2012 in how far batters hit fly balls (including home runs). This agrees with the theory that Lohse has been able to get ahead, stay around the strike zone, limit walks and force batters to chase more, causing weaker contact.

It may appear that Lohse is pitching at a level beyond what his underlying skill set suggests based on common sabermetric measures. There does, however, appear to be optimism that his changes may be more sustainable than those primary metrics indicate. As he reached his early 30s and saw his fastball velocity decreasing, he found a new pitch, the sinker, to replace his four-seam fastball as his pitch of choice. It has become the pitch he trusts the most, throwing it when behind in the count to hitters on both sides of the plate. He commands it so well that he has become among the league leaders in first strike percentage. Getting ahead of the count has put hitters on the defensive. They are chasing more of his offerings than ever off the plate. There is at least some evidence that the quality of contact hitters are making is weaker than ever. The sinker also has improved his control, giving him an elite BB% to keep runners off the basepaths. This, in part, has been Lohse's recipe for recent success.

The bottom line to Cardinals fans, I'm sure, is that they don't care how he's doing it, as long as he keeps doing it.

Credit and thanks to Fangraphs, Brooks Baseball, Baseball Prospectus and Beyond the Boxscore for data upon which this analysis is based.