How Far Back Do You Trust FIP?

Fielding Independent Pitching is a wonderful tool, but how relevant is it to a historical discussion of player value?

Share All sharing options for: How Far Back Do You Trust FIP?

But first, a couple of clarifications. I love FIP. I love DIPS. I love Fangraphs. I also recognize like any rational human being, that fielding independent statistics have their limits, just as anything else in life. I also hope Fangraphs pitcher's WAR remains based on fielding independent data because A.) we should have options, and B.) The option Fangraphs gives us is more often a better evaluator of true-talent in single season samples than RA/9, in my opinion.

But, when we begin to examine pitchers historically, I'm not sure FIP is as helpful.

Most readers of Beyond The Box Score are aware that one of FIP's best qualities is that it predicts next year's ERA so well. Typically, a pitcher's FIP in one season correlates to his next season's ERA at about r = .46 while Year 1 ERA correlates to Year 2 ERA at somewhere around r = .38. BTBS alumnus Bill Petti showed us these correlations for seasons 2004-2011 not too long ago. This high correlation is true only for recent seasons, however.

Because as we cruise back through the decades, the correlation between FIP and next year's ERA fades.

Baseball has grown increasingly dependent on the components of FIP, aka the Three True Outcomes, as it's matured. Strikeouts, Walks, and Home Runs are now monopolizing the outcomes of more Plate Appearances than ever before. If we look at 3TO%, (K+BB+HR)/PA, through the years we can see the trend matches the rise of FIP's predictive powers almost perfectly: 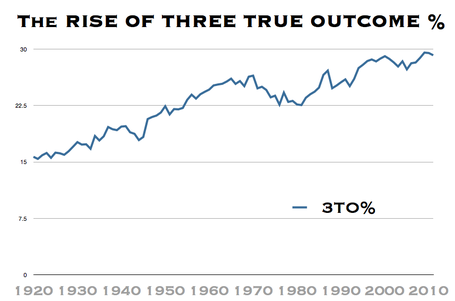 I've always used 1992-1993 as the break point at which I begin to use or weight FIP less, though I've never done the hard analysis to confirm if that is the best time to do so. Does this mean I believe FIP has zero value prior to 1993? Not at all. The entirety of FIP's value is not solely found in it's predictive abilities. It still is a measure of what happened, uninfluenced by the pitcher's defense, and that is always an asset when estimating pitcher value. But I've realized I've chosen to weight it substantially less in seasons prior to 1993 because of how different the game was played prior to that season, and I'm curious if others do this as well.