How Average is Average?

On a season-to-season basis, "average" players may not be the same players that we would typically associated with that term.

Share All sharing options for: How Average is Average?

According to Baseball-Reference the scale of Wins Above Replacement (WAR) is as such:

Given these distinctions, a player who is worth ~2.0 WAR is typically considered to be an average major league regular. Names like Jamey Carroll, Darwin Barney, Mark Ellis and Carlos Quentin come to mind when we think about average major leaguers. However, when we throw on a pair of blinders and look at just one season of baseball, the players who end up in the ballpark of league average is fairly fun and interesting.

So, I set to find the list of players who were about league average, this season, in terms of WAR.

I controlled for players who were worth between 1.5 and 2.5 WAR based on FanGraphs' calculation of the statistic. There were 76 hitters who qualified as "average" and 65 pitchers. Both lists contained some fun (and unexpected) major leaguers. 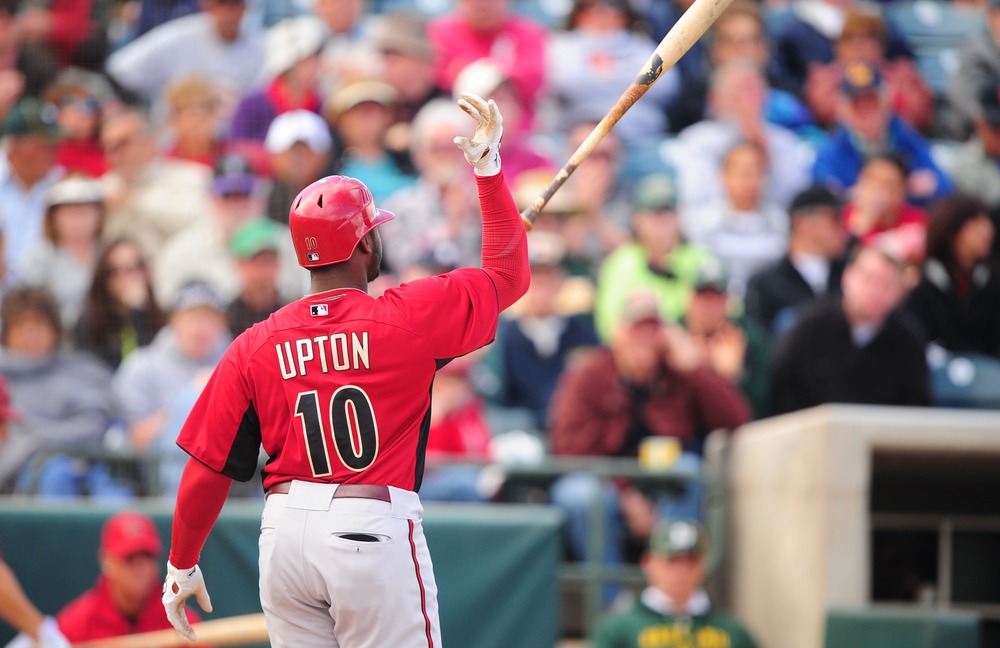 The Stud and the Dud:

Wikipedia defines regression toward the mean as:

The phenomenon that if a variable is extreme on its first measurement, it will tend to be closer to the average on a second measurement

This idea applies to baseball in many different ways. In this case of this list, it applies spectacularly to the cases of Justin Upton and Adam Dunn.

Upton made a strong case for the NL MVP, in 2011, by leading Arizona to the playoffs and ranking fourth among NL hitters in WAR (6.4). Dunn made an even stronger case for baseball's least valuable player, ranking dead-last in the MLB with a WAR of -3.0.

Upton's power was zapped this season, as his slugging percentage dipped from .529 to .430. The Arizona right fielder followed up an MVP-caliber campaign with only a slightly above average season (2.5 WAR)

Dunn's 40-home run power returned this season, and his average and OBP broke the .200/.300 level, respectively, which allowed him to return to being an almost league average everyday player (1.7 WAR).

Alex Rodriguez has had a strange postseason, to say the least, but he also finished as the third-least valuable player in baseball, according to my list from last week. When the Yankees signed A-Rod to a ten-year extension after the 2007 season, I don't think they expected him to be a league average player (2.2 WAR), just five years later.

In 2006, Brian McCann was in the midst of an All-Star/Silver Slugger rookie campaign, behind the plate for Atlanta. At that time, the Braves had a top-20 catching prospect coming up through their system in Jarrod Saltalamacchia.

Six years later, they both would finish at exactly league average (2.0 WAR); however, McCann is still with the Braves, while Salty resided behind the dish for Boston.

Given the fact that WAR has a playing-time component, a player with 400 PAs will have a higher WAR than an equivalent player (in offense, defense and baserunning) with 200 PAs.

Two of the game's superstars, Evan Longoria and Troy Tulowitzki, had seasons that were marred by injuries. They combined to play in just 121 games; which was disappointing for their respective teams. However, Tulo (1.5 WAR) and Longo (2.4 WAR) were able to be near league average in 2012, despite their injuries.

Last offseason, the Padres shipped off their ace, Mat Latos, in exchange for a collection of prospects headlined by first baseman Yonder Alonso. The Padres already had a big first base prospect in Anthony Rizzo though. So, Rizzo was sent to the Cubs in exchange for reliever Andrew Cashner.

Both Alonso and Rizzo would turn in "average" seasons, 2.0 and 1.8 WAR respectively, for their new ballclubs. Rizzo did so in a much more efficient-fashion, amassing his value with 368 plate appearances to Alonso's 618.

At the mid-way point of the 2012 season, the Brewers' Rickie Weeks and the Mets' Ike Davis were arguably the two worst regulars in baseball. Both hitters would enjoy resurgent second-halves, that brought their seasons out of the depths of negative value, and back to league average (both finished the year with 1.6 WAR).

Oakland and the Unexpected

Coming into 2012, Josh Donaldson was a catcher with .275 career average in the minors. When Scott Sizemore experienced a season-ending injury, Donaldson was thrust into the Athletics' Opening Day lineup at third base. Donaldson was able to pull off a surprisingly valuable 2012 campaign (1.8 WAR) and help Oakland make the postseason.

Brandon Moss (2.4 WAR) was another key to Oakland's playoff run. Moss was in the majors as 23 year-old with Boston, in 2007. The former outfield prospect spent most of last season with the Phillies Triple-A affiliate, the Lehigh Valley IronPigs. Moss began 2012 by hitting a ton of home runs for the Sacramento Rivercats, and he didn't stop once Oakland gave him the call, hitting 21 for Oakland in just 84 games. 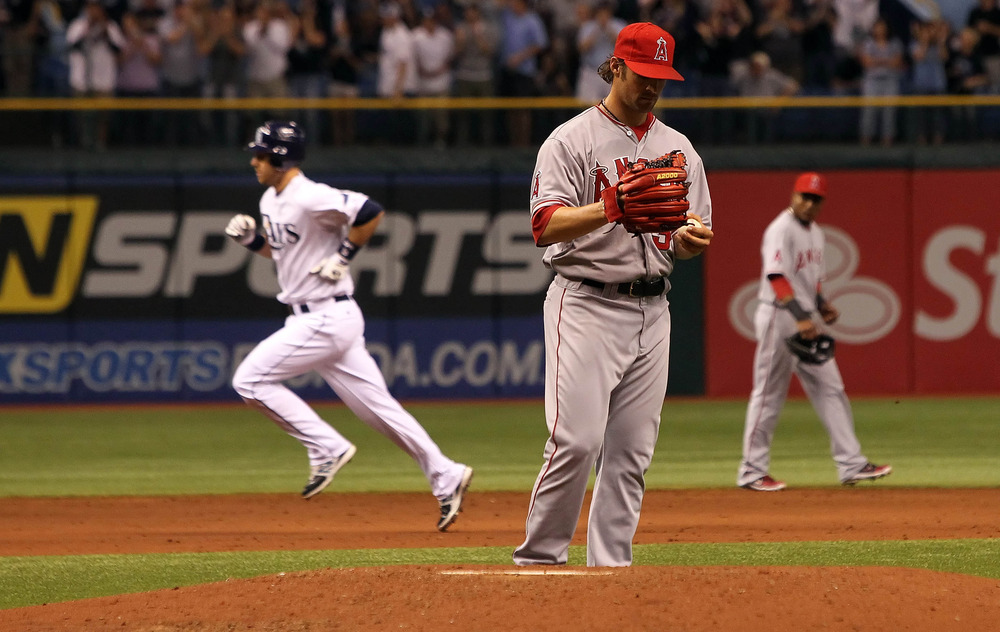 Last offseason, C.J. Wilson and Mark Buehrle were the top free agent starters on the market. Wilson inked a five-year deal with the Angels worth $77.5 million, while Buehrle signed with the Marlins for four years and $58 million.

Both pitchers rewarded their new ballclubs with league average seasons, (2.5 WAR for Wilson and 2.1 for Buehrle), not exactly what either team had in mind.

This heading is technically false, as the Yankees' top-two starters, CC Sabathia and Hiroki Kuroda, both amassed over 2.5 WAR.

But the Yankees rotation was ridiculously deep on paper, last offseason, even after the trade of A.J. Burnett. Unluckily, Michael Pineda would miss the entire season due to injury, leaving the Yankees with Phil Hughes, Ivan Nova and Andy Pettitte as the back-end of their rotation.

All three of those starters would not reach the two-WAR "average" threshold, with WARs ranging from 1.6 to 1.9.

In 2012, Tim Lincecum and Roy Halladay both made $18+ million, but their performances weren't up to par with their salaries. Lincecum's ineffectiveness almost caused him to fall below this list (1.5 WAR), while Halladay's season was negatively affected by injuries and a velocity drop.

Before the season, I don't think anyone predicted that both Lincecum and Halladay would finish the year as "average" starters.

Bobby Valentine's time as a the manager of the Boston Red Sox was as peculiar as it was unsuccessful. The Red Sox were bad in 2012 for a bunch of reasons that had nothing to do with Valentine's personality or managerial ability, including a lack of good starting pitching.

Jon Lester was Boston's only above-average starter, and his WAR was just 3.3. Felix Doubront (2.1 WAR), Josh Beckett (1.8) and Clay Bucholz (1.9) were all mediocre. Boston's record is a testament to the fact that a rotation full of average starters just won't cut it in the AL East.

Stephen Strasburg was worth a stellar 4.3 WAR before being shutdown prior to the end of the 2012 season.

Before the season, the Rays' starter Matt Moore was drawing serious comparisons to Strasburg. Moore was serviceable for Tampa Bay, but he struggled with controlling the strikezone and thus, ended up with a WAR of 2.3.

Ross Detwiler started in place of Strasburg for the Nationals in Game 4 of the NLDS. Ironically, Detwiler's WAR was 1.9, supplanting right in the middle of this list.

The moral of the story?

Over the course of just one major league season, average players are not always as mediocre or boring as we would expect them to be.