Is Roy Halladay beginning to decline?

Roy Halladay has been one of the best pitchers of our generation, year after year finishing at or near the top of every measure we consider valuable. But In 2012 he was not himself ... is it possible that he's beginning to decline?

Share All sharing options for: Is Roy Halladay beginning to decline?

From 2006-2011 Roy Halladay was the epitome of consistency. He was a workhorse in every sense of the word, and he posted the results to back it up. He didn't become a strikeout pitcher until 2008, typically he hovered around 15-20%, but in 2008 he started striking out over 20% of the batters he faced. Halladay was always excellent at limiting walks, never walking more than 5%. There wasn't much that he didn't do well, and that's why he was one of the best in the game.

Here's how he stacked up against nine other pitchers during the 2006-2011 stretched that I mentioned earlier. I set an innings limit of 450, for those that are wondering. In this particular list Halladay was arguably the best pitcher in the game. He had the best ERA-, as well as the best FIP-.

You'll notice that his strikeout percentage is a little low, but that's largely due to him striking out only 15% of batters in 2006 and 2007. Halladay was also the most durable pitcher, pitching twenty one more innings than CC Sabathia. He only landed on the disabled list twice during that span- once in 2007 after getting an appendectomy, and again in 2009 after he hurt his groin.

In 2012 something happened though. The Roy Halladay that we saw wasn't the one that we were used to. He was throwing his cutter 2 MPH less than the previous year. His strikeout percentage was down to 20%, 3% lower than last season. His walk percentage on the other hand was still excellent. Typically, Halladay does a good job of inducing groundballs, as well as keeping men on-base. In 2012, however, he struggled with both. His GB% was 10% below his career average, and his LOB% was 4% below his career average.

In 2011 Halladay's cutter averaged 90.6 MPH, but during the 2012 season it only averaged 88.6 MPH. I looked at Baseball Prospectus PITCHf/x leader boards to see how his cutter fared by month, and these are the results.

Halladay never touched 90 MPH once with his cutter all year. Bill Petti found that based on how fast a pitcher's fastball is by June we should have a good idea of what to expect going forward. He also found if the pitcher's fastball isn't the same speed as the previous June we shouldn't expect that velocity to return. Halladay didn't pitch in June during the 2012 season, but during July of 2011 his cutter hit 91.4 MPH. This year it was 89 MPH. That's a difference of over 2 MPH, and going forward that could be a cause for concern.

This chart gives us a look at Halladay's plate discipline stats since 2007. For the most part not much changed. He did get batters to chase more, but he also saw a decline in his zone%. Since this didn't tell me much, I decided to look at his whiff/swing% profile. 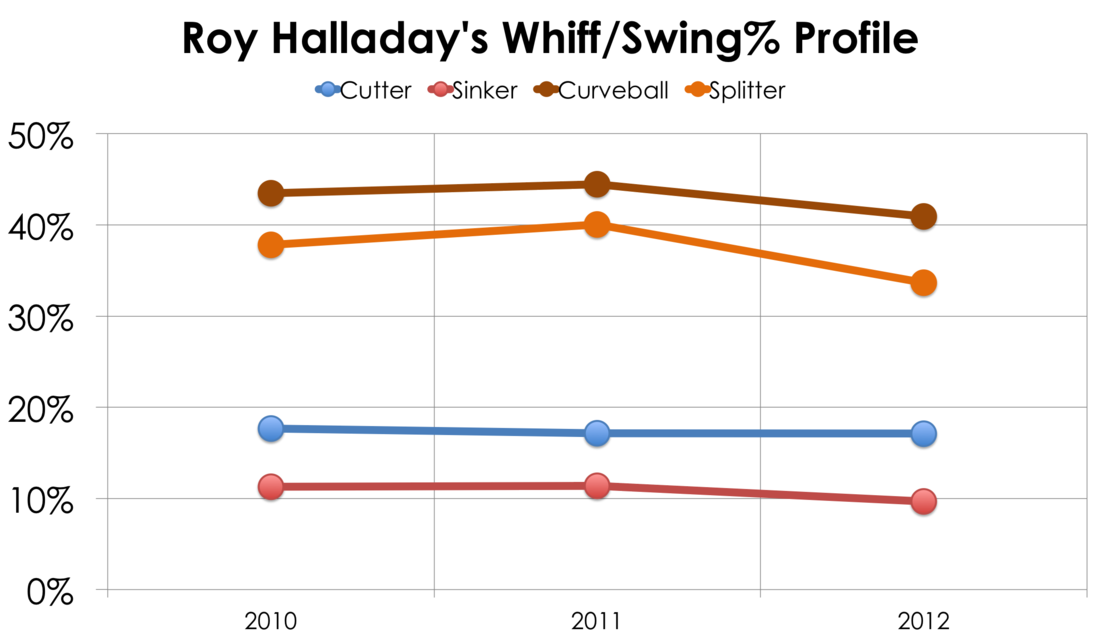 Halladay also struggled when it came to generating whiffs. Last year his curveball generated a 44% whiff/swing%, and his splitter generated a 40% swing/whiff%. This season he saw his whiff/swing% drop for both pitches. His curveball fell to 40.91%, and his splitter dropped to 33.65%. I started the chart at 2010, because that is when Brooks Baseball started to show Roy Halladay throwing a splitter.

The drop in his swing/whiff% for his splitter appeared concerning, so I went to Baseball Prospectus, and looked at their PITCHf/x leader boards. I made the minimum 200 total change-ups for the year. Here are the top six biggest deltas for whiff/swing% from 2011-2012:

Going forward it will be interesting to see how big of a concern this is. If he's able to get back to generating more whiffs with his splitter it would be a big help.

This past decade Roy Halladay has been one of the best pitchers in the game, and has been extremely fun to watch. This year he didn't look like himself, and showed some signs of decline. Whether it continues next year remains to be seen. I for one hope it doesn't.