If consistency is a virtue, does constant change count as being consistent? Let's look back in baseball history to bring to light those hitters who oscillated the most in year-to-year performance.

Alex Rios is somewhat of an enigma. Just ask J.P. Ricciardi, Kenny Williams, Ozzie Guillen or any fantasy baseball participant over the last few years attempting to assess his expected performance for the upcoming season. Over the past five seasons, Rios' wRC+ has scored as the following astounding sequence: 110, 77, 108, 59, 125. Since wRC+ measures a player's runs created relative to the league average, this means that Rios has toggled between being well above the league average and well below the league average in alternating seasons over that stretch.

While all players have some year-to-year variation in performance, Rios has taken his to a level far beyond most big leaguers. It would be interesting to look throughout baseball history to find other players who managed similar roller coaster rides. 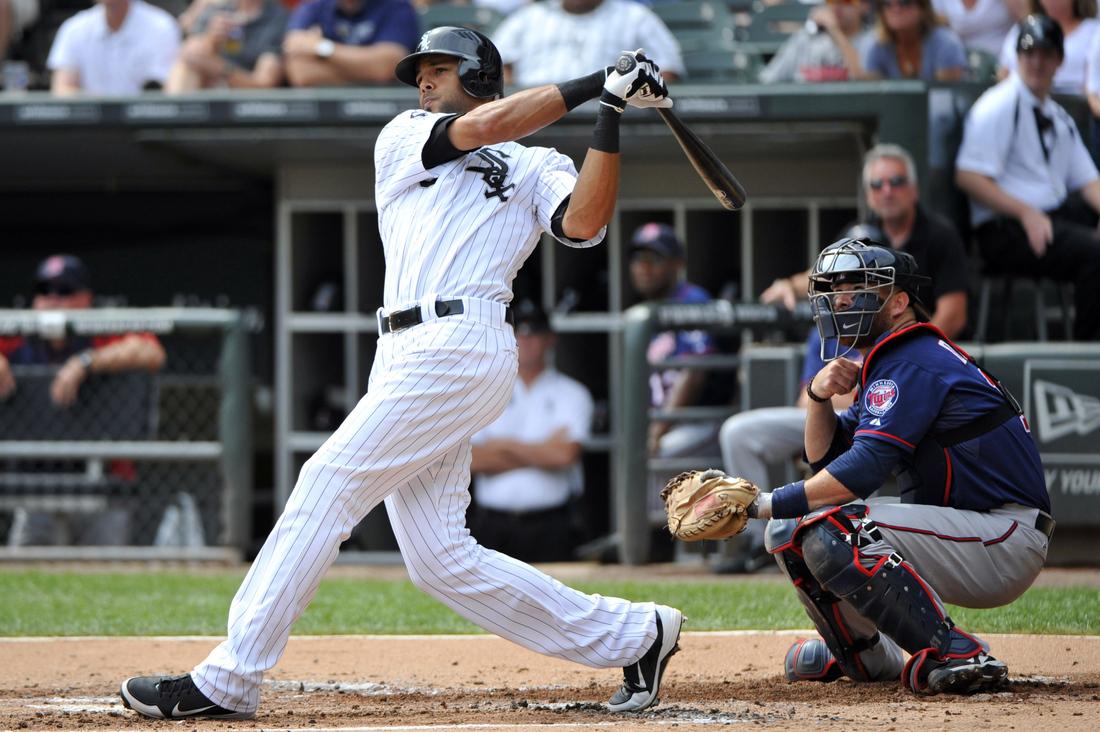 To start, we need to decide on a single metric to measure yearly performance. While one of the all-encompassing WAR(P)s could be useful, there are a couple of reasons that these may not be ideal in this situation. For one, these stats are cumulative, meaning more playing time leads to more opportunities to accumulate WAR(P). Additionally, when picturing what an alternating boom-and-bust sequence might look like in my mind, I picture offensive production, and not so much potential yearly changes in defensive performance. wRC+ appears to remove both of these obstacles, and is also both park and league-adjusted. wRC+ feels like a good measure for such an investigation.

The next question to consider is regarding minimum plate appearances. Should we only look at qualified hitters in each season? This would seem to be inappropriate in this case, as I would suspect many players would receive far less plate appearances in some of their "bust" seasons of the sequence. Given this, we will essentially remove all minimum plate appearance restrictions in the investigation, making the minimum just ten trips to the plate.

The final question will be, what criteria should be used to define such an up-and-down sequence? Initially, we will look only for sequences of years with alternating wRC+ deltas of positive and negative. Using this definition, we get the following list for longest streaks of all-time: 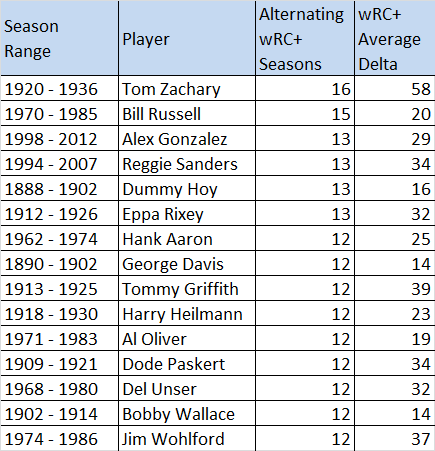 I had expected to see a number of pitchers make the list, given the unpredictability that comes with small sample sizes of plate appearances that pitchers would make. Surprisingly, only Zachary and Rixey that appear on the list were pitchers. Interestingly, shortstop Alex Gonzalez has the longest active streak at 12 consecutive alternating wRC+ change seasons. Having suffered a season-ending injury in early May this year, Gonzalez' 2013 option with the Brewers will not vest. Should he sign on with a team in 2013, he has a good chance at extending his streak, given that his shortened 2012 season ended with a career-high wRC+ of 113. This marked the first time that he has created runs at a level above the league average in the major leagues.

Seeing Hammerin' Hank Aaron's name on this list typifies the reason that this particular definition of "boom-bust" sequence is not the most appropriate. Certainly nobody could accuse Aaron of having real "down" seasons, as the Hall of Famer produced at an above-league-average level in all but his penultimate season the in bigs.

To get at the heart of what is amazing about Rios' last five seasons, it is not just the direction of the wRC+ change, but the magnitude of that change in every single season of the streak. Rios has posted wRC+ deltas of at least 30 in each year of his streak. Let us search anew, this time redefining our criteria for alternating seasons of wRC+ improvement and decline where the absolute value of such change exceeded 30 in each year. In addition, we are really more interested in position players, so we will filter pitchers from the results. We now get the following list of players: 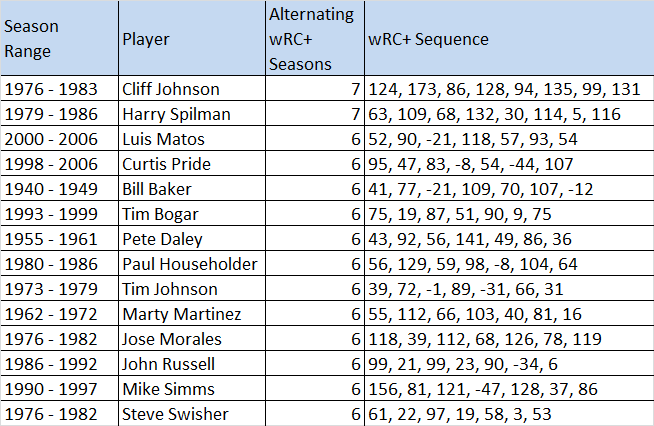 The most interesting name on this list is right at the top. Cliff Johnson not only has the longest such streak in history, but he is also the only player on this list to post at least 200 plate appearances in every season of his roller coaster sequence. His streak spanned across playing for four different teams: the Astros, Yankees, Athletics and Blue Jays. Amazingly, in the 11-year span between 1972 and 1983, the smallest year-to-year wRC+ change that he registered was 19. Johnson truly was the king of the yo-yo in MLB history. [If we include all players, pitcher-turned-celebrity-golfer-extraordinaire Rick Rhoden also matched the longest streak at seven seasons.] 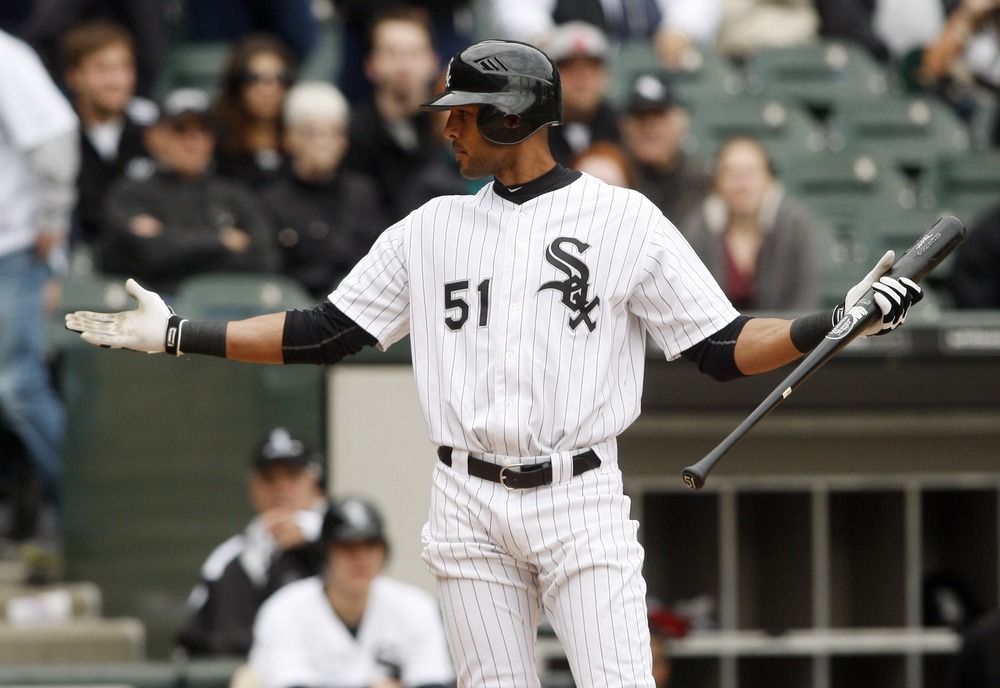 Noteworthy in the above table is the lack of Alex Rios and his four consecutive oscillating yearly offensive results. Apparently many others have accomplished what he has in years past. However, Rios has managed to receive enough plate appearances to qualify for the batting title in each of the years of his streak. None of the players on the list above can make that claim. Although we started out deciding to consider basically all seasons in our investigation, if we do consider only streaks made up of all qualified seasons, we finally see Rios' name at the top of the list:

We see some more recognizable names on this list, including Bobby Thomson, who smashed the "Shot Heard 'Round the World" following the last season of his roller coaster streak. Gaetti won both the World Series and ALCS MVP Award in 1987, right in the middle of his streak. Huff also won the World Series during his streak, with the 2010 San Francisco Giants. He finished seventh in NL MVP voting in that same season. So Rios is in some select company here.

Out of interest, we can finally list the players with the longest active streaks of this type, again removing any yearly plate appearance requirements:

Both Helton and Murphy have sustained their roller coaster rides an extra season over Rios to date. Helton is the most interesting new name, both because of his resume as well as the fact that he has accumulated at least 280 plate appearances in each season of his streak. Rios stands out from all other active players as having endured the entire season with significant playing time even in his trough seasons.

If asked, it would be likely that the players on this list could not give a confident answer as to why every year ended so differently that the one just prior. In considering potential reasons, the first explanation would be the small sample of plate appearances that many of these hitters made in several of the seasons during their streak. The variability in results from these small samples could certainly explain a lot of the roller coaster ride. Related to this, some players had seasons cut short due to injuries, while no doubt some played through debilitating injuries that additionally hampered some of their trough seasons. BABIP can introduce some variability as well. In the case of Alex Rios, over that many plate appearances it would seem that BABIP differences would not be solely "luck", but partly quality of contact as well. Certainly his robustly higher LD% in 2008 and 2012 promotes a much better expected BABIP than in the other three seasons.

Sure, consistency is a virtue. But variety is the spice of life, right? 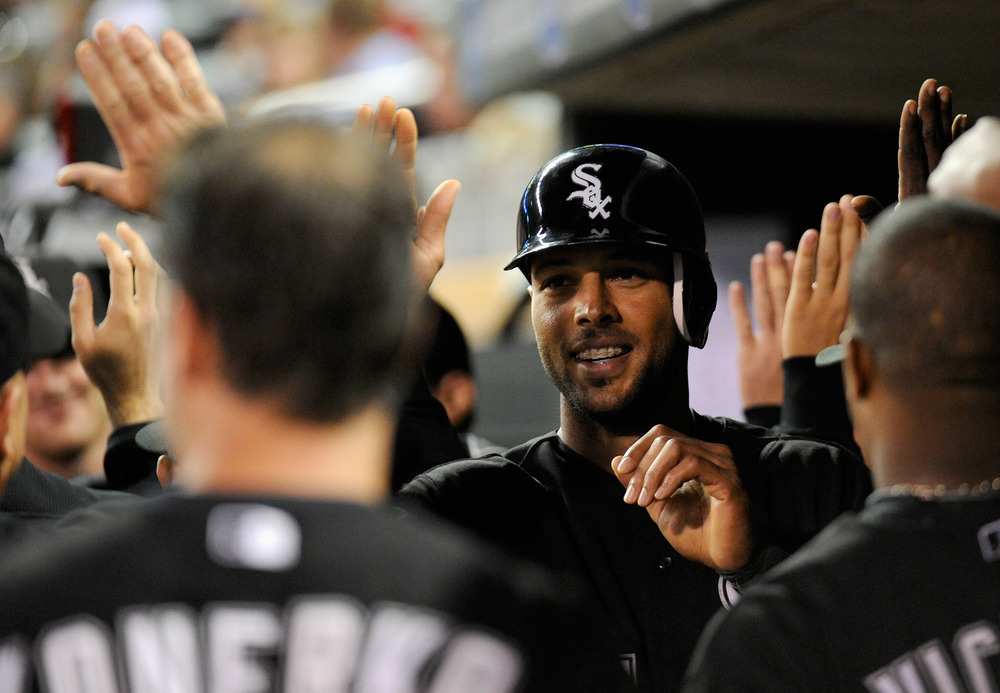 Credit and thanks to Fangraphs for data upon which this analysis is based.