Can Ricky Romero be fixed?

2012 was a year to forget for Toronto Blue Jays pitcher Ricky Romero. Is it possible for him to fix his mistakes, or is he destined for the bullpen?

Share All sharing options for: Can Ricky Romero be fixed?

From 2009-2011 Ricky Romero was a good, not great, starting pitcher. He posted above average strikeout numbers, and did a good job at inducing groundballs. He posted slightly below average walk numbers, and also gave up his share of home-runs. Other than that, he was a typical middle-of-the-rotation-type pitcher.

In 2012 something happened though. His strikeout percentage dropped, and he saw an uptick in his walk percentage. His home-run per flyball percentage saw a 2% increase, and overall was just way too high.

Besides his struggles with the three true outcomes, he also struggled at stranding runners. A 75% LOB% is considered above league average, but a 67% LOB% hovers between poor and below league average. The one positive is that his GB% faced little to no change.

What was the cause of this sudden change? Can he make the changes that are needed, and bounce back in 2013?

First I decided to take a look at Ricky Romero's average fastball velocity. If he was experiencing some sort of decline, then that would be a huge factor. 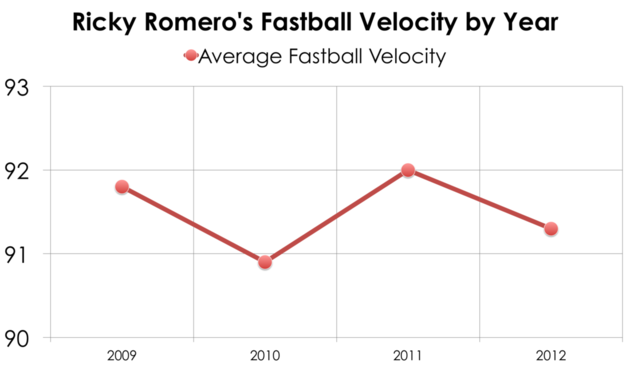 If you take a look at this graph, notice the pretty significant loss in velocity that Romero experienced this year. Former BTBS writer Bill Petti wrote a series of excellent articles regarding fastball velocity, and concluded that the odds of regaining velocity are low. He found that 27-year-olds have .25 times the odds of regaining velocity, but they only regain .3 MPH. Romero did regain velocity last year, but going forward it still remains a big concern. 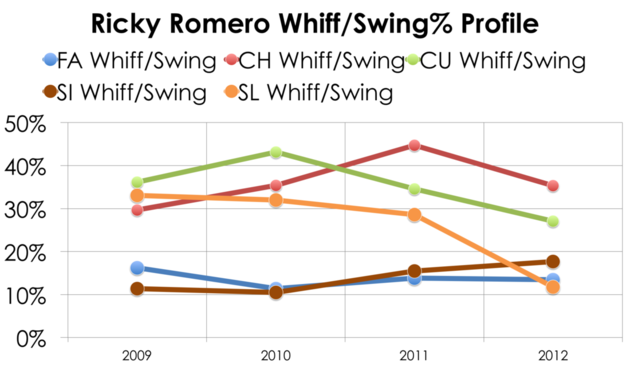 From last season to this season alone, Romero saw his change-up whiff/swing% decrease by a total of 9%. That's an enormous amount, and as a result he struck out thirty fewer batters with that pitch. His curveball's whiff/swing% sustained a 7% loss, and resulted in eleven fewer strikeouts.

Lastly I looked at standardized runs by pitch. This shows how many runs a pitcher saved or gave up when using a particular pitch. It's based on a standardized 100 pitch type scale. I gathered the data from FanGraphs.

His only pitch that saved runs was his change-up, and that was only .65 runs. His worst pitch was easily his slider. That pitch cost a total of 10 runs, and was a big contributor to his struggles. For the most part pitches should be between +1.5 to -1.5 runs. Extremes aren't out of the ordinary though. Romero has some changes to make.

*Brooks Baseball lists his slider as a cutter this year. I am not sure if that is due to mis-classification.