The 2012 wins above replacement leaderboards can be very useful for a cost-profit analysis that reveals baseball's least valuable players for this season.

Last week, I released the final standings of 2012's most economically valuable players. For that piece, I used a simple profit equation to analyze which players were the most valuable.

I used FanGraphs' calculation of wins above replacement (WAR) as the quantity of value a player contributes to his team. Then I combined WAR with a dollar value, I used $4.5 million as the price for one WAR, to get a "revenue" amount for each individual player. I used a player's salary for cost. The revenue and cost amounts were then combined into this profit equation:

In order to rule out hitters with large salaries that missed almost the entire season due to injury (for example: Carl Crawford $19.5 million, 0.4 WAR), I set a minimum number of plate appearances at 200.

I did the same thing for pitchers, by setting a minimum number of innings at 50. 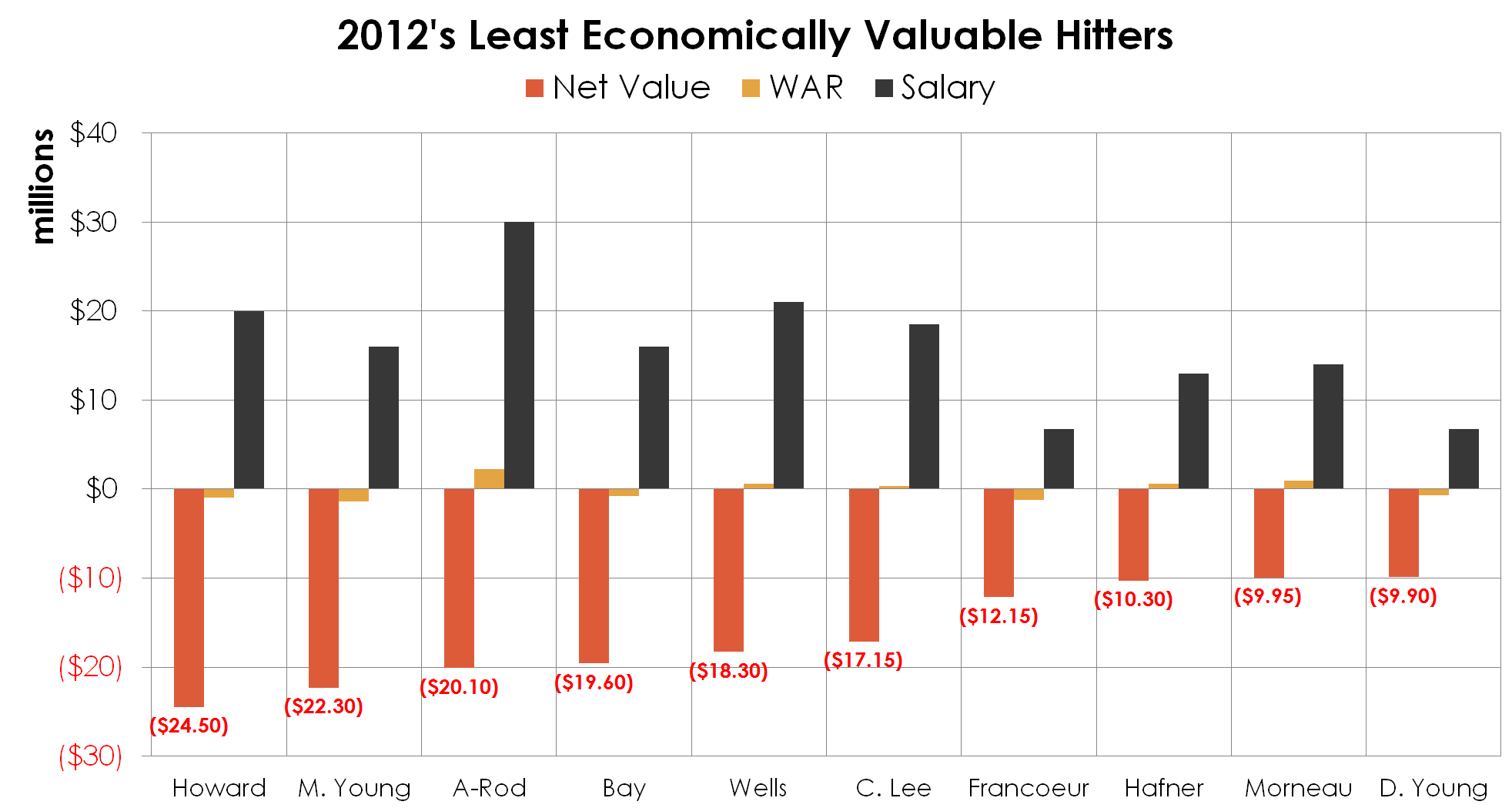 Howard missed the entire first half due to an injury he sustained on the final play of the Phillies 2012 season. Howard played in enough games (72) though to contribute less than replacement level value to the Phillies. Howard's on-base percentage sat below .300 for the first time in his career (.295). Howard's wRC+ of 86 was well below average, especially for a slugging first baseman who is expected to hit 40+ home runs, based on his salary.

Michael Young was continually inserted into the Rangers lineup in premium spots in the order, typically third or fifth, despite having one of baseball's worst offensive seasons (wRC+ of 77).

Alex Rodriguez has been criticized by a fair amount by the Yankees fan base this postseason, but his regular season also wasn't even close to being worth biggest contract in baseball. 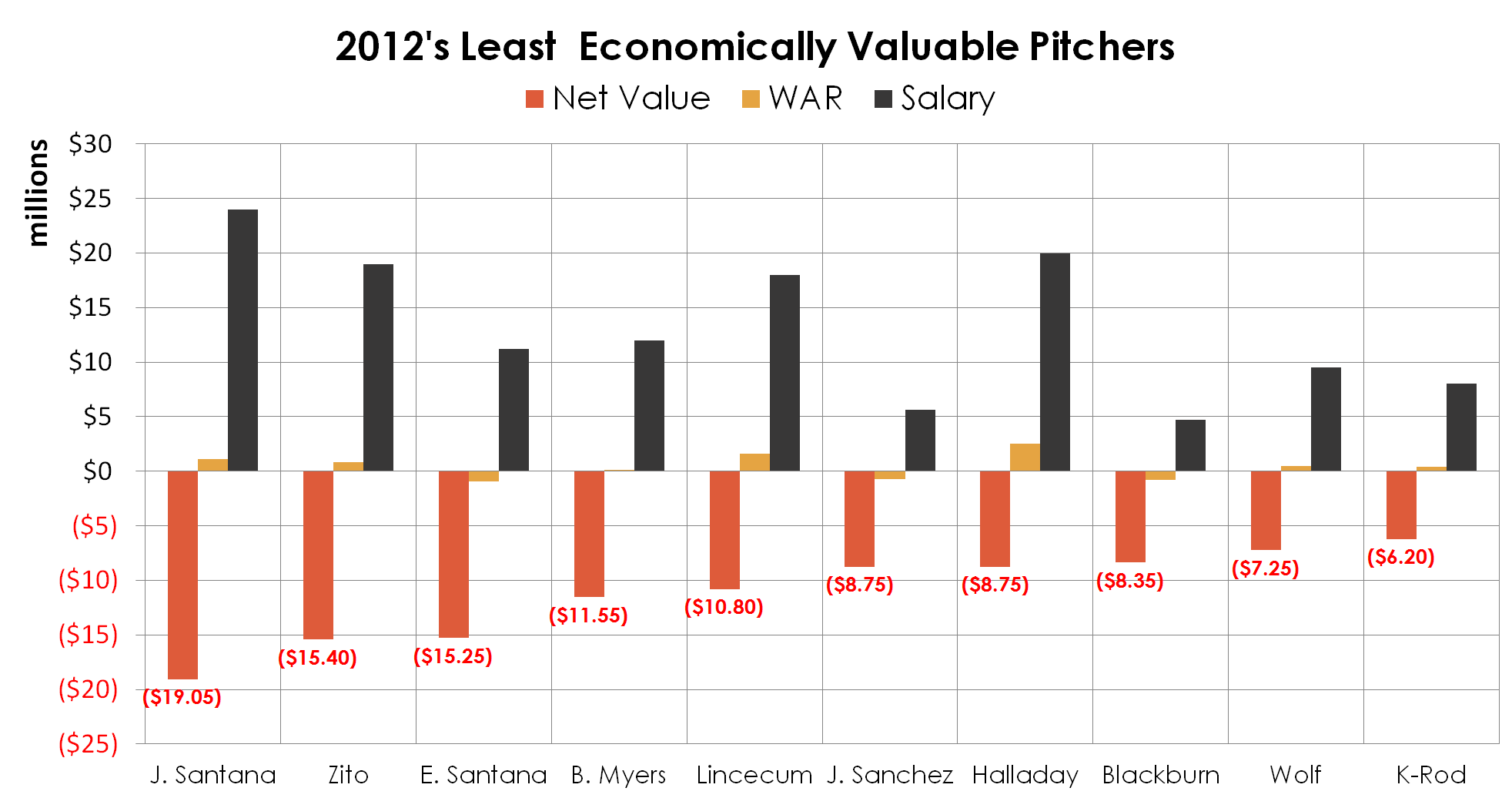 The New York Mets starter Johan Santana wins the title of 2012's least valuable pitcher. Santana's June 1st no-hitter was one of the more memorable moments of the 2012 season. However, Santana was in no way worth his $24 million salary.

Barry Zito didn't have his worst season with the Giants in 2012, but his performance was still not even in the ballpark of his pay. Zito's teammate, Tim Lincecum, joined him in the top-5.

Luckily for San Francisco, their pitching staff was deep enough to be able to live with plunging $37 million into their fourth and fifth starter, and still make the NLCS.

Ervin Santana gave up the most home runs in baseball in 2012, and his rough season will result in his 2013 option not being exercised this winter.

The most surprising name on this list has to Roy Halladay. Halladay makes "Roy Halladay money", but an injury kept him from being the 200 IP, sub-3.00 ERA/FiP guy, the Phillies traded for.

I think Halladay's 2012 season is a pretty good cautionary tale. When teams pay starting pitchers salaries in the $20+ million range, it has to be almost a guarantee that the starter throws 200+ innings.

The Yankees' ace, CC Sabathia was injured for a brief period this season, which limited his innings to "just" 200. Sabathia's 2012 WAR (4.8) wasn't enough to break even with his $23 million salary.

I think this tale adds a little take away to this primarily pure-fun article.

Baseball is baseball; anything can happen from season-to-season, it's completely unpredictable. Heck, four years ago, Scott Kazmir was a 24 year-old two-time All-star, this season he pitched for Sugar Land Skeeters.

When a team signs a free agent to a big, lengthy contract, they are paying for past performance. They obviously dish out all that money, in hopes that the player continues to be as great going forward, but with baseball that's impossible to be sure of.

All statistics come courtesy of FanGraphs. All contract information comes from Cot's Contracts.

Many thanks to jbopp for the assistance in creating the charts for this piece.