A look at dramatic season-to-season power upgrades, whether they tend to be sustainable, and what this means for the four players who muscled up in 2012.

Share All sharing options for: Are unexpected power surges sustained?

Ian Desmond, Chase Headley, Aaron Hill and A.J. Pierzynski have something in common: all of these hitters managed major power surges in the 2012 season, with each player turning single digit home run totals from a year ago into surprising 25+ home run seasons.

Perhaps the best way to represent batting power is through Isolated Power (ISO). As a quick summary, ISO is just the difference between slugging percentage and batting, measuring the "extra" bases a hitter averages per at bat (with walks specifically excluded). The particular achievement that these four players realized in 2012 was a yearly ISO increase of .100 or higher.

How common are spikes in Isolated Slugging?

To first understand how common such a year-to-year increase has been over the course of baseball history, we can observe how many players achieved this very feat by year: 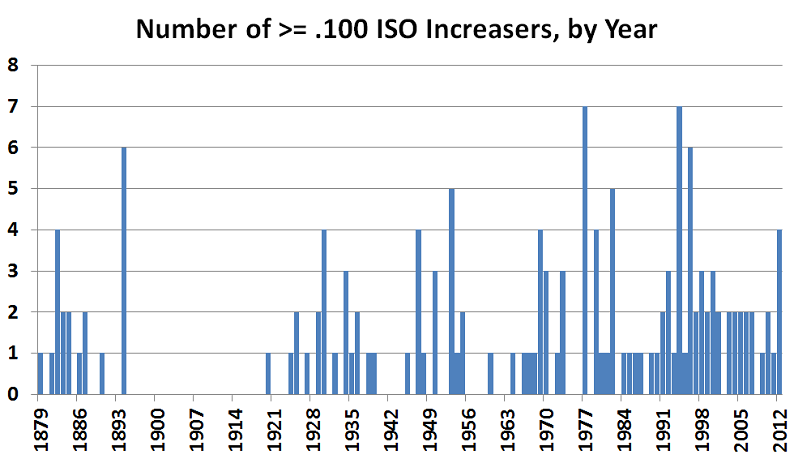 Since 1871, there have been only 147 instances of this degree of a power surge in one season, including the four players from 2012. You may not be surprised that Jose Bautista's 2010 season was the highest year-over-year ISO increase of all time, at an amazing .197. We can see that the graph is becoming more dense in recent decades, indicating a slight increase as of late in this accomplishment. Clearly it has occurred since the beginning of baseball history, with a noticeable gap during the "Dead-ball era" that most date from 1900 to 1919. Overall, we see that this level of increased power is not common.

At what age do ISO spikes typically occur? 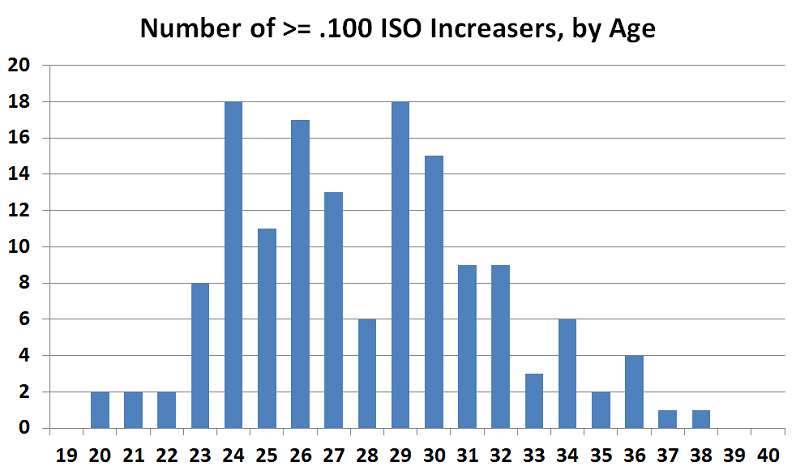 Not surprisingly, we see the decade between age 23 and 32 accounts for the large majority of such yearly power spikes. This age range would cover both the majority of players in the league at any one time as well as the anticipated peak power period for hitters.

What happens the year after a spike in Isolated Slugging?

We can then consider what happened to these newly powerful hitters in the year after such a surge: 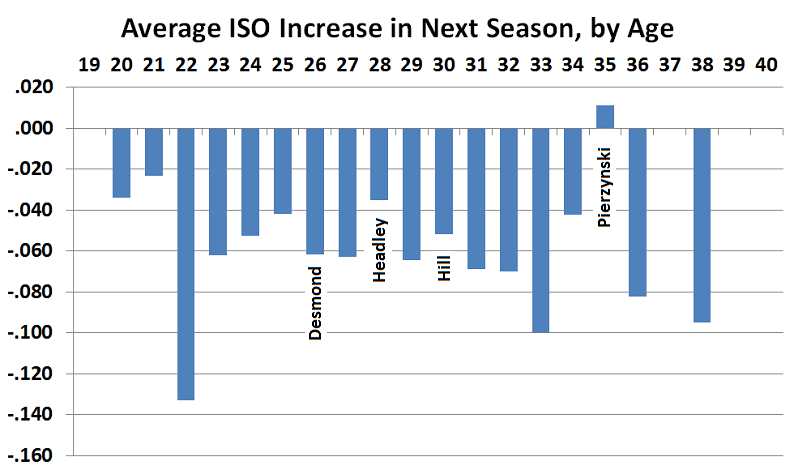 To be expected, most hitters saw their ISO shrink the following season. The average ISO loss has been -.059, meaning hitters tended to give back a little more than half of their additional extra bases from the year prior. Age does not appear to be a factor in this case - a repeat season is difficult regardless. Only 15 hitters managed to increase their ISO yet again, while 116 had ISO losses. Note that some players did not receive enough plate appearances to qualify in the following year, so they are not included in these totals. The four players from 2012 are shown in the graph by their age. Coincidentally, Pierzynski is the same age as Tony Phillips, who at age 35 accomplished this feat and then followed it up with a slight ISO increase in his age 36 season. Obviously a sample size of one is not of particular relevance in this case, as the overwhelming majority of players saw regression following their breakout power season.

Given what we have learned from history, ISO improvements in 2013 do not look promising for these four players. However, we can drill a little deeper into the four seasons put up by these players in an effort to understand which, if any, may show underlying signs to indicate a new sustainable power level.

From a first look, Hill is the only player of the four to have ever produced with this amount of power at the major league level. (That's not completely true, as Desmond posted a .280 ISO in 2009, but his season consisted of just 89 plate appearances so was not included in the list of seasons from which the previous high was selected.) Desmond was the only one of the four to post a career high in FB%, with a slight increase over his previous high. Both Desmond and Headley saw large jumps in HR/FB rate. Pierzynski appears to have only relied on a small uptick in HR/FB rate, but his previous career high was back in 2005, and he had been seeing consistent drops in this metric since that time prior to his resurgent 2012. Hill posted a 2012 closely resembling his 2009 season in Toronto, when he set his career high HR/FB rate while posting an ISO just ticks below his 2012 output.

There are some additional measurements we can examine that could also assist in determining how sustainable these players' output might have been in 2012:

The most encouraging numbers from this list are from Desmond and Headley, who generate the most ball speed off the bat, leading to flyballs and home runs that are on average 10-15 feet further than Hill and Pierzynski. Headley, the only switch hitter of the four, is also the only one of the bunch playing half of his games in a home ballpark that suppresses extra base hits more than the league average. This puts him at a marked disadvantage over the other three, especially since the majority of his at bats come from the left side, where Petco Park plays particularly tough.

Ian Desmond appears to have real power, with better than average flyball and home run distance generated by good bat speed. After a brief 2009 where he smashed the ball as well, he posted very pedestrian HR/FB rates in the past two full seasons. Desmond has bought into the Nationals new hitting approach to stay inside, seeing a marked improvement in performance against inside pitches and fastballs in general. While his HR/FB may not stay as high as it was, he represents a good candidate for maintaining more of his 2012 power surge than the average player who has accomplished this feat.

Chase Headley also appears to have considerable power, posting the longest average flyball and home run distances of the group. As mentioned, his home ball park is brutal, and while his HR/FB will likely not shrink back down to 4.30% as in 2011, it will almost certainly not repeat at 21.40% as in 2012. Overall he seems like a candidate for a normal regression from his power surge year.

Aaron Hill hits by far the most flyballs of the group, so does not need to reply on an elite HR/FB rate in order to buoy his ISO. He plays in a very favorable home stadium for right handed hitters, and appears to have recovered from a 2011 season where his average flyball and home run distance plummeted to 258.59 feet. His 2012 average of 282.58 feet is more in line with his seasonal averages from his years in Toronto. While entering his early thirties, Hill also seems to be a candidate to hang onto more of his ISO increase than average for power surgers in 2013.

A.J. Pierzynski managed an 18.60 HR/FB ratio in 2012, after not seeing a double digit rate since 2006. He does not hit flyballs and home runs particularly far, and is not hitting more flyballs. Despite the follow-up success experienced Tony Phillips, and the home run friendly home stadium, at 36 next season he will be pushing up to an age where most observe significant decline. Also, given that he is a catcher, his body will have gone though more pounding than the average position player. Pierzynski seems like a candidate for a significant power decline next season.

Credit and thanks to Fangraphs, ESPN Stats & Information Group, Baseball Heat Maps and StatCorner for data upon which this analysis is based