The running game is an exciting part of baseball, but studies show the impact it makes on scoring runs does not match the excitement level that it generates. If a team performs well on stolen base attempts over the course of a full season, can it really be a difference maker?

Share All sharing options for: The Running Game Still Matters

What is the most exciting play in baseball? A close play at the plate? A long bomb? A legged-out triple? Baseball has its fair share of captivating events, and the stolen base attempt is certainly among them. Speed gets people out of their seats. Speed on the bases forces pitchers to divide their attention between the batter and the runner. While the stolen base does impact the game and the way that it is viewed in these ways, there is a general conclusion among the sabermetric community that stolen bases are not particularly important.

[* Tom Tango gracefully pointed out that the original values used in this article to convert from game events (including stolen base and caught stealing) were actually the contribution they make to wOBA, not to runs. My confusion stemmed from the fact that the contribution that SB and CS make to wOBA and runs are actually quite similar. In the most recently available data that I can find from 2008, again from The Book Blog, a SB contributed 0.24 to wOBA and 0.20 to runs. A CS contributed -0.51 to wOBA and -0.42 to runs. Since 1871, the run contribution for a stolen base has been 0.20, so it seems safe to select this as an acceptable value for 2012, without having the latest data. For 2001-2008, the run contribution value for a caught stealing attempt fluctuated between -0.42 and -0.44. Selecting -0.43 seems like a good approximation for the purposes of this exercise, without having the 2012 data available. It is likely the actual 2012 values may be slightly different, but in the context of this particular analysis, that difference would be negligible.] 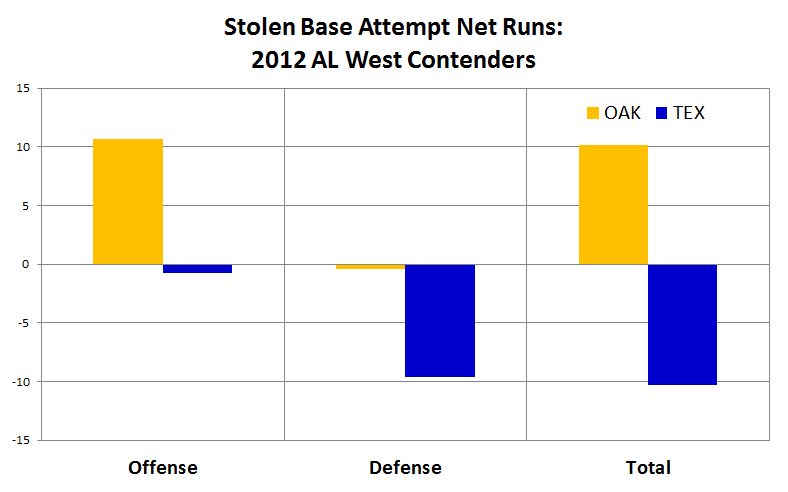 Under this light, the two teams vying for the American League West Division crown on the final day of the season executed on opposite sides of the running game spectrum this year. The eventual division winning Athletics ranked second in the MLB in overall stolen base acumen, while the runner-up Rangers languished as the second worst in the league in this respect. The difference in net runs between the two clubs was 20.5 runs. Using the runs to fWAR conversion of 10:1, this equates to a seasonal difference of two wins based solely on managing stolen base attempts.

You can make the argument that teams are built differently, and one based on speed and defense would tend to score higher in this area than one built on pitching and power, for example. It is worthwhile to note the fact that the Rangers, with almost the exact same group of players, had ranked as the second best team in the league in 2011 at overall stolen base management. A year ago, Texas finished with 12.0 net runs in this metric, meaning that they experienced a whopping 22.3 run year-over-year drop, or two wins. This drop was balanced across the offensive and defensive side of stolen base attempts, losing 10.0 runs on offense and preventing 12.4 less runs on defense.

On the defensive side, Yorvit Torrealba and Mike Napoli handling the majority of the catching duties in both 2011 and 2012, with Geovany Soto also in the mix this season. Torrealba and Napoli both neutralized the running game in 2011, preventing 0.4 and 1.0 net runs on stolen base attempts, respectively. This year they both regressed, with Torrealba allowing -2.1 net runs and Napoli ceding -3.7 net runs. Newcomer Soto did not help either, allowing -2.6 net runs in the running game while Napoli recovered from injury. This pales to compare with third-string catcher Taylor Teagarden from 2011, who in limited action threw out more runners than he allowed to steal, contributing 1.8 net runs.

The bottom line is that had the Rangers maintained some semblance of the base running execution that they had in the previous year on both offense and defense, 2012 may have gone down differently in Texas.

Much research has proven the relative worth of a stolen base, the cost of being caught stealing, and the required success rate to make stolen bases a good idea. Compared to other events that take place during the course of a particular game, the stolen base attempt is less of a factor than many other plays. When zoomed out and summed up over the course of a long season, the way a team handles stolen base attempts becomes just another small, but not insignificant part of the puzzle that contributes to runs. Scoring and preventing runs is the name of the game, after all.

With the Tampa Bay Rays organization famously concerned with any aspect of the game that could give them that "extra two percent" to get over the top, the stolen base attempt must be taken seriously. The Texas Rangers should realize that more than anyone as they watch the rest of the 2012 playoffs from the sidelines.