It's Hall of Fame Season, that time of year when baseball folk are most apt to consider the career value of a player. Of course, it's not just the total value that matters in these discussions, but also how that value was accrued. In general, given two equal career values, there's a bias toward players whose value is concentrated in a smaller number of seasons. Those with a higher peak, in other words.

By contrast, we have the players whose career value is more evenly spread out. These players are sometimes called "compilers," a term used almost as a slur in some circles. Personally, I don't consider being a compiler to be a bad thing. Having exceptional peak value is nice, of course, but I think there's a place in the Hall of Fame for players with lower (but still high) peaks and exceptional longevity.

To determine which pitchers were the most compiler-y, I created a junk stat that I call "Compiler Rating."* The basic idea is to compare a player's total career value (by Baseball-Reference WAR) to his value in his 5-season peak. It's admittedly arbitrary, but the results are nonetheless quite interesting. 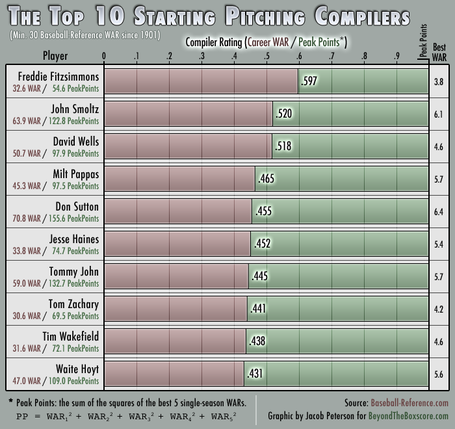 After the jump, I analyze the top 10 and discuss a few other notable players. Plus: a bonus graphic of the 10 greatest non-compilers in MLB history.

The top 10 contains several names that I expected; Don Sutton and Tommy John, in particular, are among the players most commonly tarred with the "compiler" brush. It's hardly a surprise to see guys like Tim Wakefield or David Wells on the list, either. They pitched so long, and for many years so consistently, that they make total sense.

One player on the list surprised me, however: John Smoltz. Having watched him for basically his entire career, I never once thought of him as a compiler. I think what's going on with him is that A) injuries probably hampered his peak value, and B) his years in the bullpen skew the results a bit. In the latter case, a great bullpen year like Smoltz's 2003 (3.2 WAR) is considered just a pretty good year by starting-pitcher standards.

Of course, Smoltz still ranks 5th on the list if you remove his 3 full-time relief years. It's possible that if he had started full-time from 2002 to 2004, he'd have added to his peak value, though. After he went back to the rotation, he did post two of his best seasons (in 2006 and 2007).

The only pitcher to rank ahead of Smoltz is Freddie Fitzsimmons, or "Fat Freddie" as he was apparently known. He somehow managed to earn over 30 WAR without ever having a 4-WAR season. Fitzsimmons is the only starting pitcher to accomplish that feat, thouh Earl Whitehill and Bob Buhl each had just 1 4-WAR year.

It's important to note that a player can be a "compiler" and still be a very worthy Hall of Fame candidate. Don Sutton is in the Hall, of course, and while he's not in the upper echelon of HoF pitchers, he is clearly deserving to anyone but the strictest of "small Hall" advocates. Similarly, Smoltz is a solid candidate, "compiler" or not, and Tommy John isn't far from being deserving, either.

I find that amusing.

The highest-ranking active player is Wakefield (assuming he's still active) in 9th place. Behind him, you have Freddy Garcia (30th, .362) and Mark Buehrle (37th, .345). Oh, and possibly Jamie Moyer, who ranks 20th with a .407 Compiler Rating. Cross your fingers on that one, everybody.

Oh, I should mention that there are 178 pitchers in the sample (SPs to accrue at least 30 WAR since 1901, counting years before 1901 for those who played before then).

On to the bonus graphic. These are the pitchers with the 10 lowest Compiler Ratings in the sample. The guy on top should come as no surprise. 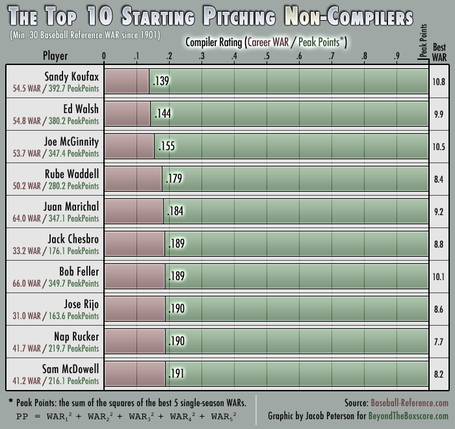 One thing I love about this list: both Juan Marichal and his son-in-law Jose Rijo made the top 10.

It's fun to compare guys on this list with guys on the other list with similar career WARs. Would you rather have Wakefield's career or Rijo's? Slow-and-steady or burn-bright-but-burn-out? In many ways, I think Wakefield's career is more impressive, though a part of me admits that Rijo's career probably was more valuable.

The active player with the lowest Compiler Rating is Johan Santana, whose .225 mark puts him 36th-lowest. After him is Roy Halladay (50th lowest, .243).

Using "Peak Points" as a measure of peak value, here are the pitchers with the 10 best peaks:

Pedro Martinez, Randy Johnson, and Greg Maddux are all in the 16-20 range.

If you have any questions about Compiler Rating or how a particular pitcher ranks, just let me know in the comments or on Twitter (@junkstats). Below, I've also included a brief explanation of how Compiler Rating was derived. Thanks for reading!

* You may be wondering where the formula for Compiler Rating came from. I wanted to emphasize the value of a player's peak, and in particular, I wanted to emphasize the difference between, say, a 6-WAR season and a 5-WAR season. That's where squaring the individual season's WAR values comes in. The decision to use the top 5 season WARs for Peak Points was pretty much arbitrary; you could just as easily run the same numbers with a shorter or a longer peak.

Here are a couple examples using the top and bottom compilers above: