A Graphic Look at the Nationals with Gio and Prince

Share All sharing options for: A Graphic Look at the Nationals with Gio and Prince 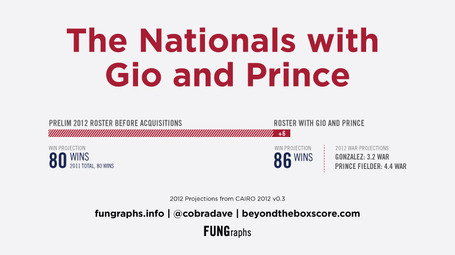 As many of you would probably argue, this may be a little early to start predicting where your team would end up in the standings, but with projections season amongst us, how do you think the Washington Nationals would fare with their acquisition of Gio Gonzalez, and possibly soon-to-be-signed Prince Fielder?

Based off the latest 2012 CAIRO Projections, looks like they're looking at 86 wins, 6 wins more than their 2011 win total. Within the CAIRO projections spreadsheet from Replacement Level Yankees Weblog, they've already mapped out a method of projecting standings.

Anyway, using the depth charts from the wonderful MLB Depth Charts and including playing time from players on the 40 man roster who don’t necessarily figure to be part of the the opening day 25 man rosters to account for organizational depth and playing out next season 100,000 times, here’s how CAIRO v0.3 sees things as of December 13, 2011. These were run with Aramis Ramirez as a Brewer, but I didn’t remove any of the non-tendered players from yesterday from their rosters.

I've gone ahead and replaced Ross Detwiller as a starter and Adam LaRoche as the starting 1B with Gio and Prince.

With my original calculations based off Scott McKinney's method of WAR calculations for the Royals, this only yielded 79 wins, so this new method seemed more plausible.

The result of swapping Gio and Prince with Ross Detwiler and Adam LaRoche resulted in 6.2 extra wins.

You can imagine that this win total can be +/- 1 based on park effects. With 86 wins, the standings would look like this (based on CAIRO Projections 12/13)


With the Philadelphia Phillies aging by the minute, it's likely that the Nationals are able to compete for the NL East crown, or at the least, the NL Wild Card with this win total.

More Resources:
-Go see our previous look into the Nationals offseason, Replacing Runs in FA: Nationals.
-Read about the latest on the Nationals and Fielder on this Federal Baseball post. Lots of goodies here.