Between my own Hall of wWAR, the National Baseball Hall of Fame, and Baseball Think Factory's Hall of Merit, there are now three "Halls" that honor the game's best players. So, how do they compare? 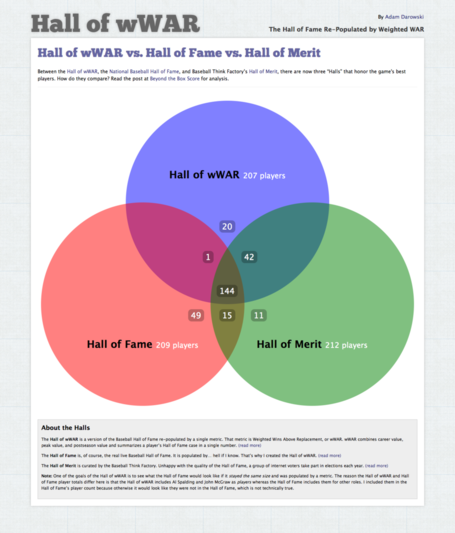 There's just so much to take from this. First, there is consensus on 144 players. One would think that those would be the 144 best players of all time. Well, one would be wrong. Here is a list of the top players (by wWAR/norm) who are not in all three Halls.

That's just those who appear in the Top 144 eligible players. Here, I obviously use "eligible" as meaning "retired for five years". Pete Rose and Shoeless Joe Jackson obviously are not eligible for the Hall of Fame.

I just can't believe we have a Top 50 player who is struggling to get in the Hall of Fame.

Here's another interesting table—the best players not in any of the Halls (the top 30):

Update: I have tweaked this a bit because since I grabbed the data Rafael Palmeiro, David Cone, and Rick Reuschel were inducted to the Hall of Merit. (Thanks to @RAWagman)

Please be sure to check out the interactive visualization. Anything else jump out at you?

Please note that the visualization requires a modern browser (such as Chrome, Safari, or Firefox) to render properly. Are you a web development geek? This and all other Hall of wWAR-related visuals is open-sourced on GitHub.