Carlos Beltran and Life After a $100 Million Contract

Share All sharing options for: Carlos Beltran and Life After a $100 Million Contract

When the Cardinals inked Carlos Beltran to a two-year deal worth $26 million, I wondered how that deal compared to other contracts that followed a $100 million deal. Here you go: 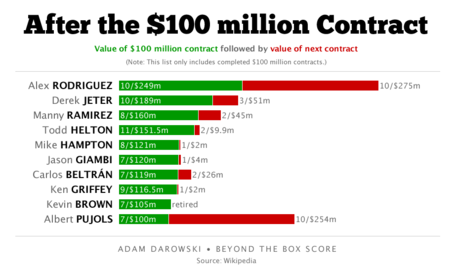 The above graphic shows contracts that have been completed (and what type of contract each player received immediately after the $100 million deal expired).

There are three groups here. The first group contains Alex Rodriguez and Albert Pujols. They signed $100 million deals (in A-Rod's case, a $250 million deal) at very young ages and were still productive at the end of the contracts (or, again in A-Rod's special case, when he opted out of the final three years).

Next, you have the group that includes Beltran, Derek Jeter, and Manny Ramirez. Each signed a shorter, but lucrative deal.

Finally, you have the players who signed deals, but at prices that no longer recognized them as impact players. Todd Helton, Jason Giambi, Ken Griffey, and Mike Hampton are in this group. Kevin Brown never signed another deal.

Any guesses at what kind of deals Joe Mauer, Mark Teixeira, CC Sabathia, Adrian Gonzalez, Troy Tulowitzki, Miguel Cabrera, Carl Crawford, Johan Santana, Alfonso Soriano, Vernon Wells, Barry Zito, Jayson Werth, Ryan Howard, Cliff Lee, Matt Holliday, and Carlos Lee will get after their current ones expire? Each is currently playing with a $100 million contract. One has to think we will have more than a few Griffey-type deals there (and perhaps some Kevin Browns).

Will we see another player follow up his $100 million deal with another one?