Share All sharing options for: Change in Individual Hitter Metrics: An Interactive Tool 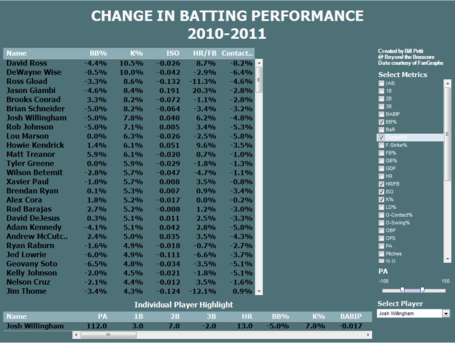 Sometimes you just want a quick way to identify players that took big steps forward or backwards from year to year. Well, now you have it.

I've put together an interactive dashboard that shows the year-over-year change in 40+ hitting metrics for players with at least 100 plate appearances in both 2010 and 2011. The tool also includes Wins Above Replacement (FanGraphs), value (in dollars), and BsR.

You can sort by any metric and select specific ones to compare for all hitters. (Click on a column and then use the sort button at the very bottom of the visualization.) Using the filter on the lower right-hand side you can also limit the output by some range in changes in plate appearances.

At the bottom, you can also select a specific player and view every change for each category without altering the larger table.

How is this useful?

For one thing, it allows you to get a quick look at how a batter's performance changed from year to year without having to download all the data and do the calculations yourself. You can quickly see who had the biggest jump in wOBA, or the largest drop in BB%, etc.

Second, large changes in certain metrics can provide you with a clue as to whether the change may be an indication of further improvement or decline for a player. A single statistic is never enough to make such a determination, but it can point you at an area for further study. Remember, some hitting metrics are more consistent year to year than others. When those change and swing wildly, it's typically worth a look to understand why and whether it's indicative of some significant change. 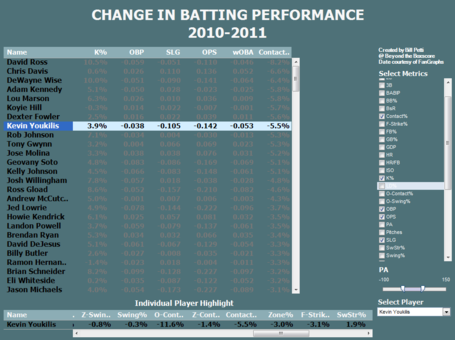 Youkilis increased the percent of balls outside the strike zone that he offered at by 2.2% and decreased his contact percentage on those swings by 11.6%. That's easily going to cut into your OBP, but could also explain the drop in slugging since flailing at balls outside the zone tends to create weaker contact.

Now, many who followed Youkilis over the past few years know that he's been breaking down. However, if you haven't and you see these kinds of swings on the more consistent metrics it should give you pause and cause you to investigate further to see if this is indicative of more permanent change.

Feel free to play around (that's why I built it). Here's a link to the interactive tool. Questions/comments always welcome.