A Graphic Look at Pineda vs Montero

Share All sharing options for: A Graphic Look at Pineda vs Montero 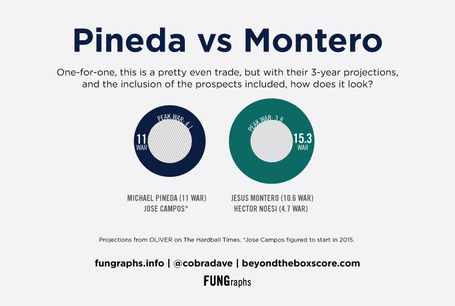 What a block buster eh? Considering Pineda is under team control for 5 more years and Montero for 6, this seems like an unlikely trade for the Yankees. We're all used to the big contract acquisitions from them, but this one's interesting. Michael Pineda (3.4 WAR / 171 IP in 2011) and Jesus Montero (0.6 WAR / 69 PA in 2011) both are 22 years of age, and are projecting over 3 WAR next year according to OLIVER.

So how does this trade project for both teams in the next 3 seasons?

The projections for next year seem to widely vary in terms of WAR, but for IP and PA, seems to look at Pineda pitching around 175 IP and Montero getting 496 PA.

Although the cumulative WAR favors the Mariners (15.3 WAR vs 11 WAR for the Yankees), assuming the Mariners would use Montero in the DH role, that would be to their benefit as he's not the best defensive backstop. Even if we do think of DH as an aging player's position, this 2010 Baseball Reference article notes that the age of the DH is getting younger. Via the handy Play Index, the avg age of a DH between 06-11 is 32 years old.

What the internet thinks of the trade: