Share All sharing options for: A Graphic Look at Remaining FA Hitters Available 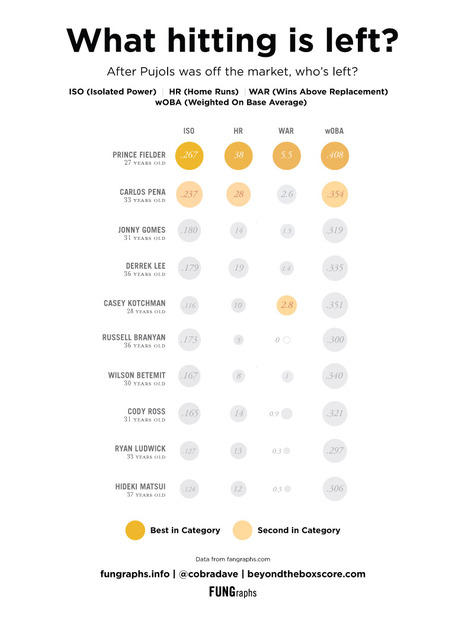 It's clear that Prince Fielder is the still the prize in free agency, and still out there. While there's not many teams that can afford his services (Nationals, Marlins, Rangers?), the rest of the league still have these guys to fulfill their hitting needs.

The Luke Scott signing, the re-signing of Scott Hairston for the Mets, and oddly, Andruw Jones one-year deal with the Yankees, took three possible candidates off my list. This is first sorted by ISO and then I worked my way through the other three categories, HR, WAR, and wOBA. I wanted to use HR just as a compliment to ISO.

Just from a surface look, there doesn't seem like there's all that many teams with holes in DH, 1B or OF. From what I can see and what MLB Trade Rumors constantly tells me, here's where some of these guys projects to go:

While some of these guys aren't necessarily gems anymore, at the price, especially for a small market team like the A's, they can be a great bargain. Wilson Betemit and Casey Kotchman, most notably are high on this list in wOBA:

To add on to this, their wRC+, which I didn't pull out for the rest of these guys, represent a smart pick up. They both are at the top of the list with Prince Fielder and Carlos Pena in our list of guys:

Who would you sign as a free agent to fill in your DH/1B/OF gaps?

For more check out FUNGraphs.info or follow me @cobradave for more.