The More Powerful the Hitter, the Less Clutch They Are. No, Really.

Share All sharing options for: The More Powerful the Hitter, the Less Clutch They Are. No, Really. 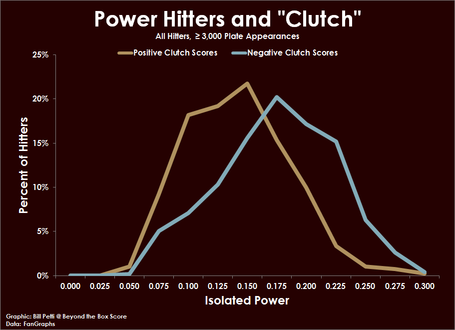 A while back, our own Julian Levine noticed something odd when perusing the leaderboards at FanGraphs--historically, power hitters seemed to be worse when it came to their Clutch score.

I took a quick look at roughly 800+ players (≥3000 plate appearances for their career), and sure enough, the higher a player's Isolated Power (ISO) or Slugging (SLG), the lower their Clutch score. A player's ISO had a -.414 correlation to their Clutch score, while SLG came in at -.336.

Lots of people have taken on the issue of Clutch in terms of whether such a talent exists and whether we can measure it. (This 2009 piece by Tango is a pretty good place to start.) I don't want to get into a debate about the existence of Clutch at the moment, but rather try to understand why this relationship exists at all.

So let's start out with some general correlations of other hitting outcomes/attributes and Clutch:

Generally, the correlations are not very strong. We see the negative relationships between Clutch and things like wOBA, ISO, and SLG, but even ISO only explains a little over 17% of the variance in Clutch performance.

What's interesting is that the strongest positive correlation we see is for ground balls (GB%).

The higher your GB%, the more "Clutch" you turn out to be.

This jives with what we see regarding power (ISO) and overall hitter ability (wOBA). GB% has a negative relationship to wOBA (-.291) and, not surprisingly, ISO (-.527). Better hitters hit for more power (.792), and more powerful hitters tend to hit a higher percentage of fly balls (FB% correlated to ISO at .583) than ground balls (-.527).

So why are ground ball hitters seemingly more clutch?

One idea is that in high leverage situations defenses play hitters differently. For example, often times managers will draw in their infield with less than two outs. I don't have specific numbers, but ground balls already have a higher likelihood of turning into hits (and BABIP increases with runners on base). Pulling in the infield should increase that likelihood, therefore boosting a ground ball hitter's chances of getting a hit in these situations.

So it may be that these hitters aren't blessed with the ability to "raise their game" in high leverage situations so much as the defense on the field is positioned in such a way that plays to their strengths.

Another possible explanation, suggested by Matt Klassenn, is that better hitters tend to be more powerful hitters (which is true--correlation between wOBA and ISO is .792, .899 with SLG), and those hitters have bigger platoon splits. Given that, these hitters are being matched up against same-handedness relievers in higher-leverage situations.