The Hall of Fame and the Myth of Exclusivity

Share All sharing options for: The Hall of Fame and the Myth of Exclusivity 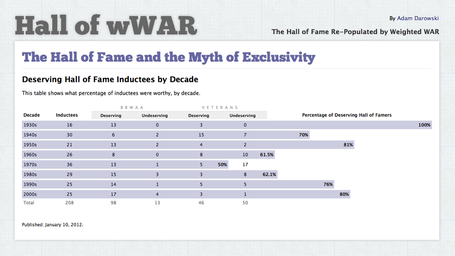 "The Hall of Fame is for the immortals of the game—Ted Williams, Babe Ruth, Walter Johnson…"

You hear people say things like this when discussing the Hall of Fame credentials for players like Tim Raines, Alan Trammell, or Larry Walker. Everyone agrees they were good players. But some people simply believe that the Hall of Fame should be reserved for players of a much higher caliber.

In 1945, everything changed. The Writers weren't inducting players fast enough, so an Old Timers Committee (precursor to the Veterans Committee) was established. The committee inducted nine players in the first year. Dan Brouthers, Fred Clarke, Jimmy Collins, Ed Delahanty, and King Kelly deserved it. Hughie Jennings and Jim O'Rourke are controversial selections, but they still rate as deserving by wWAR. Hugh Duffy and Roger Bresnahan, however, became the first players to be inducted who didn't deserve it.

And that was only the beginning.

In 1946, Duffy and Bresnahan were joined by Jack Chesbro, Johnny Evers, Joe Tinker, Clark Griffith, and Tommy Freakin' McCarthy. In 1948, the Writers themselves made their first mistakes—Herb Pennock and Pie Traynor. That brought the percentage of deserving Hall of Famers (let's call it the "deserving percentage", or DP) below 80% for the first time (79.1%).

Just 50% of players inducted in the 1970s were deserving. Fifty percent. The Writers did a good job—13 of 14 deserved it (only Ralph Kiner rates as undeserving by wWAR, and he's very close and one I'd likely keep enshrined). Out of 22 Veterans inductees, just five deserved it. Five. 1970 to 1975 was a particularly rough stretch. The Hall's DP dropped from 74.0% to 68.6%.

So, that's a thirty year stretch where just 57.1% of inductees deserved it. You want to know what's happened since then?

The quality of the Hall of Fame is getting a lot better. Barry Larkin's induction brought the overall "deserving percentage" up to 69.7%. The last time it was that high was 1973.

The quality of the Hall of Fame is better than it has been in a very, very long time.

Jeff Bagwell, Tim Raines, Alan Trammell, Edgar Martinez, Larry Walker, Mark McGwire, and Rafael Palmeiro are all currently on the ballot and would raise the Hall's DP. If all of them went in, we'd be up to 70.2%. Heck, throw Jack Morris and Lee Smith in there and we're still slightly improving over the current Hall.

In addition to those seven deserving players carrying over to next year's ballot, there are fifty-six other players who would raise the Hall's DP. These players range from 19th century stars like Deacon White and Ross Barnes to deadball era stars like Bill Dahlen and Sherry Magee to 1960s stars like Ken Boyer and Bill Freehan to underrated modern stars like Orel Hershiser and Dave Stieb.

Of course, this all depends on how much you believe in wWAR. I've always been a fan of the Hall of Merit and the Halls of wWAR and Merit have a ton of overlap. I'm inclined to trust them over the "real" Hall of Fame.