If the Season Ended Yesterday: A Phanatic Phinish

Share All sharing options for: If the Season Ended Yesterday: A Phanatic Phinish 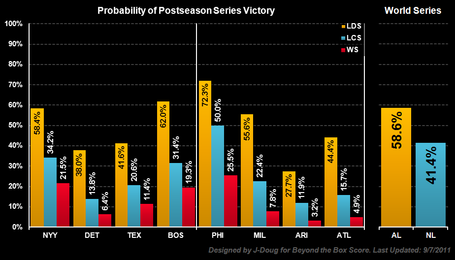 For the third week in a row we have a new frontrunner in our postseason simulation series. If the season ended yesterday, the Philadelphia Phillies would repeat their 2008 glory and avenge their 2009 loss to the New York Yankees. So says our Log5 postseason simulator based on numbers from Baseball Prospectus.

There's more to this story than the Phillies' impending triumph, including what happens if the Tigers and Rangers switch places. Keep reading to find out more.