Hurt by their Era: The Effect of Shorter Seasons on Career Value

Share All sharing options for: Hurt by their Era: The Effect of Shorter Seasons on Career Value

Base balling stars of the 19th century tend to be underrated, if not completely forgotten. The neglect goes beyond the fact that their careers occurred well over a hundred years ago. I think one of the biggest contributing factors is the shorter season length that limited their output. Shorter seasons mean fewer opportunities to accumulate impressive (and memorable) statistics.

The short seasons didn't just stunt their counting statistics. The impact is also felt in their career Wins Above Replacement totals.

For example, in 1872 Boston's Ross Barnes posted a 5.2 WAR season. But his team played just 48 games, making that figure remarkable, but not as noticeable. In 1880, Cubs teammates George Gore and Cap Anson each posted 5.2 WAR while their team played just 84 games. How would these seasons (and others) look if there was a guy who was insane enough to take every season in history, project each over a 162 game schedule, and see how that affects the career WAR list? 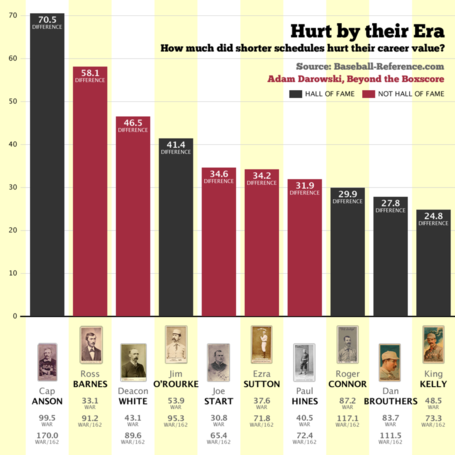 Cap Anson played in 2,524 games, made 11,331 plate appearances, and was the game's first 3,000 hit man (3,435). It is amazing to consider how much time he actually lost because he played in an era with incredibly short seasons. In 1872, Anson recorded 2.5 WAR. His team only played 44 games, however. Project that production over 162 games and you're talking about a 9.2 WAR season. In 1876, Anson collected 4.2 WAR for Chicago. Chicago played just 66 game that years. Project the 4.2 WAR over 162 games and it becomes a 10.3 WAR season. If you repeat this process for each of Anson's seasons, it suggests that short seasons cost Anson 70 WAR over the course of his career.

After making this adjustment globally, the new top 40 position players all time in WAR/162 are:

You'll notice that the adjustment doesn't aid only 1800s players. It also gives a small boost to players from the first half of the 20th century who played 154 game schedules (for example, Ty Cobb is given 10.4 WAR). It also gives a boost to those who lost time to player strikes (Jeff Bagwell picks up 4.1 WAR). It makes sense that Carl Yastrzemski would have the lowest adjustment on the list. He began his career in 1961 (the first year of the 162-game schedule) and retired in 1983, just losing a bit of time to the 1981 strike (and it didn't cost him much value becuase he was already 42 years old at that point).

The top players we see who make substantial leaps are Cap Anson, Roger Connor, Dan Brouthers, and Jim O'Rourke. All of them are already in the Hall of Fame because even with the playing time disadvantage, they still posted worthy career totals. Ross Barnes is the next on the list to make a huge leap. In fact, he is the player that inspired this research (along with Deacon White, who follows Barnes in both WAR/162 and WAR difference). The following table shows a list of the top WAR/162 single seasons among the player pool I'm considering for the Hall of wWAR*:

When I was working on the original Hall of wWAR (spoiler alert: I'm slowly working on revising it based on wonderful reader feedback), I used an arbitrary cutoff for 19th century position players (I simply lowered their wWAR cutoff to try to account for shorter seasons). While that lower baseline did allow the likes of Deacon White and George Gore to be included, I figured there had to be a cleaner way. It also didn't sit right that a player like Mr. Barnes was ignored because his low single season WAR totals prevented him from not only accumulating high career WAR value, but also high peak value (through Wins Above Excellence and Wins Above MVP).

Now that I've made the WAR/162 adjustment, I have to think about how I want to incorporate it into the Hall of wWAR. In case you're not familiar, a player is included in the Hall of wWAR based on his peak-weighted WAR. This is calculated by adding his Wins Above Replacement (from Baseball-Reference.com, like all data used here) together with his Wins Above Excellence (which is a total of all single-season WAR above 3.0) and Wins Above MVP (all single-season WAR above 6.0).

Similarly, seeing Barnes jump all the way up to #29 on the all time WAR/162 list (putting him alongside players like Al Kaline, Wade Boggs, and Joe DiMaggio) seemed like a stretch to me. But once I ran the new wWAR calculations based on the approach detailed above, Barnes came in at 55th all time (near players like Harry Heilmann, Jesse Burkett, and Paul Molitor). This is still a very high ranking, but it doesn't seem to be over the top, considering Barnes was the best player of the game's first decade. Deacon White ranked right behind Barnes in WAR/162 (30th all time). His new ranking in wWAR is 71st, alongside Willie McCovey, Larry Walker, and Willie Keeler.

I think I've got a nice modification to the Hall of wWAR. What says you?

* This pool of players includes those who have been retired for five or more years and are either already in the Hall of Fame or accumulated 40+ career WAR (30+ career WAR for 19th century players).