When we last left Hitter Volatility I was declaring the metric unreliable as an indicator of skill. That conclusion was based on the fact that Volatility correlated weakly year-over-year. However, I think I may have overstated that conclusion.

There are many statistics that do not correlate strongly, year-to-year. That being said, even for those weaker correlated statistics we tend to see variation by players over the course of numerous seasons into higher and lower performers relative to average. For example, while Batting Average on Balls in Play has a relatively weak correlation year-to-year (.36), there are clearly hitters that over time display that their baseline is consistently higher or lower than the average hitter.

So while Volatility in year 1 may not be a good predictor of volatility in year 2, there certainly may be hitters that are more or less volatile over the course of their careers than others. And that is something we can measure and take into account when evaluating hitters.

The table below lists the overall Volatility for major league hitters with over 1500 plate appearances from 2005 through this season (August 13th):

Keep in mind, the wOBA calculated here does not include stolen bases and uses the original linear weights from The Book.

If you remember, the year-to-year correlation for Volatility is .23, even lower than BABIP. However, if we look at the distribution of Volatility scores we do see a relatively normal distribution regardless of whether we look at all hitters or just those with >= 1500 plate appearances. 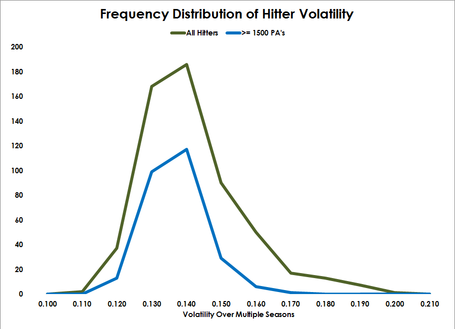 So while Volatility may bot be a reliable metric that we can use to evaluate player skill on a yearly basis it appears that if we look at multiple seasons individual consistency does emerge and is likely an attribute that varies by player.

The implication is that when making personnel decisions, Volatility may still be a viable criteria to evaluate as long as a player has accumulated a few seasons' worth of plate appearances. Take Troy Tulowitzki and Brad Hawpe. In the sample, both have average wOBA's of about .380 and about the same number of PA's (~3,000), yet Tulowitzki's Volatility score is .131 and Hawpe's is .151. Tulowitzki comes in below average while Hawpe is sitting close to last in terms of hitters with >= 1500 PA's.

Next up in this series I unveil my findings regarding starting pitcher Volatility.